During Britney Spears’ virtual court appearance on June 23, the pop star told Los Angeles Supreme Court Judge Brenda Penny that she has been mistreated and abused by way of her conservatorship. Spears expressed concerns about her family, doctors, and management team, hoping that, by speaking out, she encouraged Judge Penny to take these things into consideration in any future rulings.

In discussing her experiences over the years, Spears mentioned that she was not allowed to partake in self care throughout the coronavirus pandemic in 2020. She explained that it “took a year during Covid to get me any self care methods” (via CNN), adding that she was told that there were “no services available, despite seeing first-hand that other people were enjoying such services. “My mom went to the spa twice in Louisiana during Covid. For a year I didn’t have my nails done, no hairstyling and no massages, no acupuncture, nothing for a year. I saw the maids in my home each week with their nails done, a different each time,” Spears said.

In a new Instagram post, Spears mocked the restrictions that she mentioned in court — but, a short while later, the caption had been changed. Keep reading to find out what Spears originally wrote, and what the caption was changed to.

Britney Spears' Instagram caption was changed within a few minutes 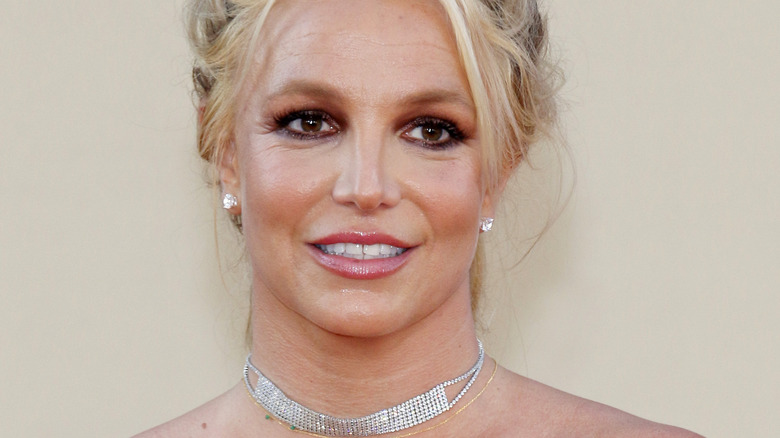 Britney Spears took to Instagram on July 13 to share a couple of photos of herself dressed up in a maid outfit. Spears wore a tiny black dress with puff short sleeves and yellow accents. The dress featured a large cut-out across the chest, and a yellow tie apron around the waist. For the second and third photos, Spears removed the yellow apron and held it over her face. The photo set was accompanied by a caption that read, “Like I said… my maids may have been able to get their nails done during COVID after salons opened but [f***]… at least my maid outfit was the hottest,” according to the Daily Mail.

However, the caption has since been changed. The original caption appears to have been deleted, and there are now three red, high heel shoe emoji in its place. Fans were quick to notice the change. “So this post said something completely different a few seconds ago,” one Instagram user commented. “What happened to the first post with the same pics talking about your nails?” a second Instagram user wrote. No word on why the caption was changed, or who might have changed it. According to Vanity Fair, Spears does have a social media team, so it’s possible that someone from her team could have updated the caption on the post.