Chase Atlantic – We could sell out – but we want to grow 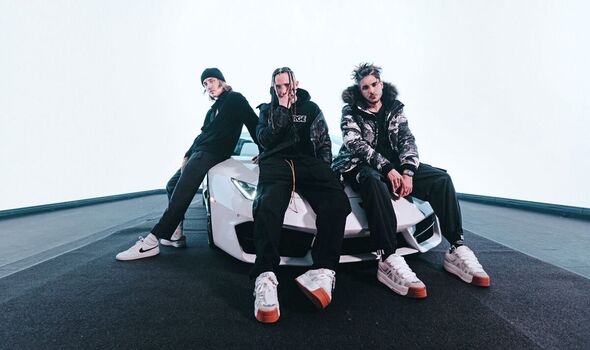 Chase Atlantic are probably more famous than even they realise. Speaking exclusively to Express.co.uk just before hitting the stage of the Hammersmith Apollo, the three lads from Cairns, Australia, seemed just like any young 20-somethings you might meet down the pub. Between jovial conversations and fiddling with pool cues, the trio blissfully chatted about their music while thousands of punters camped outside the venue in the hopes to catch even a glimpse of Christian Anthony and brothers Mitchel Cave & Clint Cave. Still – on some level – they know how talented they are. But they almost don’t want to say it out loud.

Chase Atlantic were ecstatic about being in London. Despite having their three sold-out nights at Brixton Academy moved to the historic Hammersmith venue, they were in frantic spirits. Minutes with them instantly send my mind back to university when being young, carefree and creative was encouraged. Somehow, they never lost these traits, and as a result, their music has flourished in recent years. So too has their fanbase. At the time of writing, they have over 11 million unique listeners a month. To put that into perspective, that’s more than Olivia Rodrigo (9 million), Charlie Puth (10 million) and even Metallica (9.5 million).

Of course, during the COVID-19 pandemic, the pop group trinity were forced to rethink their recording strategy. After moving to Los Angeles, California some years ago, Chase Atlantic became regulars in their city’s recording studios. But lockdown hit, they rented a large house and built their own studio to record the album which would become 2021’s Beauty In Death.

“We had a lot of time to reflect,” smiled Mitchel, the band’s frontman who was far quieter than he lets on. “We wanted to have a feeling that – we wanted to make some s**t that was actually worth being content.”

The topic of the band’s song SLIDE comes up, a rare peek behind the persona of the performing artists. Instead of singing about sex or drugs, SLIDE delved into depression. And during the various lockdowns this song – and the entire album – became anthemic for Chase Atlantic’s fans.

Mitchel mused that the album’s success was likely “because of the honesty that came out of that album”. He went on: “And I think honesty translates the most – especially to people who are going through hard times.”

Christian noted that being able to pull the three of them together, alone, to create new music, was the “root” of their creativity for their latest record.

The band’s connection to one another was obvious within seconds. Between the banter, jokes, and private jokes, it was easy to see how powerfully linked they are. “It’s funny,” Christian smirked, pointing to the brothers. “Your mum was saying this to me: I’ve become such a part of the family. We’re not really friends anymore!” A pensive moment between guffaws allowed Mitchel to agree: “It’s how you would want a relationship that you will have for the rest of your life.”

“That’s the core of it,” Mitchel went on, corralling the group’s topic back to music. “When we all work together. [When] we bring in other people there’s a lot more ideas [going around], but I think we thrive off of our own instincts.”

So, considering the Aussie trio have such a dedicated fanbase – and they’re on the fringes of mainstream pop – why wouldn’t they just sell out? Surely, they could write an adaptable beat or backing track for emerging pop stars of the world and retire early.

Instead, they want to do it their way.

“Basically, I think the beauty – to us – is: we could sell out if we wanted to,” Mitchel admitted. “But I think we want to keep this continual growth and [be] ever evolving. So people don’t get done, so they aren’t finished.” He went on: “I think we want to slowly evolve to there. Because you watch a lot of people go to the top and disappear.”

Clint agreed: “Longevity comes from actually trying to love what you do – and making good music – without having to sell out … it’s about trying to appreciate the art you do.”

Their love for their art will continue this year, as well. Chase Atlantic revealed some key details about their next album. Read all about it here.

Chase Atlantic next play the UK at Reading and Leeds Festivals.