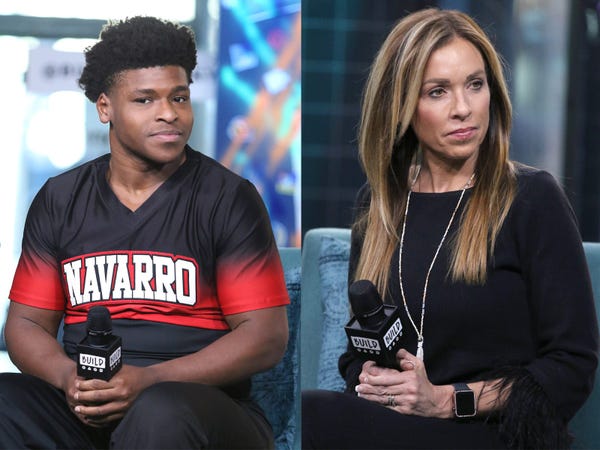 Navarro College Cheer coach Monica Aldama, who won over viewers with her charismatic leadership on Netflix's hit docuseries "Cheer," has responded to the arrest of former Navarro competitor and "Cheer" star Jerry Harris.

In a criminal complaint made public by the Department of Justice on Thursday, prosecutors say Harris admitted to soliciting child pornography from between 10 to 15 minors. He was arrested and charged with producing child pornography in connection to allegations that he requested nude photos from a 13-year-old boy.

Allegations against the "Cheer" star were first made public on Monday when 14-year-old twins revealed to USA Today that their family had brought a civil lawsuit against Harris in Texas.

In response to the initial allegations, a spokesperson for Harris told Variety that his representatives "categorically dispute the claims made against Jerry Harris, which are alleged to have occurred when he was a teenager."

Representatives for Harris did not respond to Insider's request for comment.

Aldama, who is appearing on season 29 of "Dancing with the Stars" alongside ballroom pro Val Chmerkovskiy, shared a statement via Instagram on Friday, writing that her heart was "shattered into a million pieces" by the "shocking, unexpected news."

"Our children must be protected from abuse and exploitation, and I'm praying hard for the victims and everyone affected," the post read. "Please respect our privacy as our family mourns during this heartbreaking time."

Comments on the photo have been turned off, but the statement racked up over 60,000 likes within hours of posting.

Several commenters responded, describing their "shock" at the allegations against Harris and voicing their support for Aldama.

"Having had a son in your program and knowing how much you invest in each kid, I know this crushed you," one commenter wrote. "It crushed me just thinking about the hurt this has caused for all parties affected. But don't change what you are doing for these kids because of the actions of one."

"You're an amazing model to the kids you coach and this must break your heart," another said. "Thinking of your family."

Several of Harris' Navarro teammates who were also featured in all six episodes of the Netflix docuseries — Gabi Butler, Morgan Simianer, Lexi Brumback — have yet to address the situation on social media.

Harris' former teammate Shannon Woolsey, who has since left Navarro College to cheer for Texas Tech University, shared the Navarro Cheer account's statement to her Instagram story on Friday.

"Cheer" standout La'Darius Marshall, who recently made a return to social media after worrying fans with an Instagram post nodding to his struggles with his mental health, also shared the statement on Twitter.

Harris was scheduled to be a presenter at the Emmy Awards this weekend. The 21-year-old is currently behind bars, but his attorney said he will ask for Harris to be released due to health concerns, according to CNN. Harris, he said, has asthma, which may put him at a higher risk for COVID-19.