Elvis Presley: The moment Colonel Parker negotiated 50 per cent according to King’s cousin

It’s widely believed that Elvis Presley’s manager Colonel Tom Parker had a 50 per cent cut when it came to his sole client. And now The King’s cousin Billy Smith has shared when he believes Elvis agreed to the deal. In a new video below, the Memphis Mafia member took fans back in time to 1967 Bel Air, when Elvis was getting ready to shoot another movie.

Billy Smith said: “Elvis had slept in a bathtub and hit his head…it kind of caused a concussion.”

With a production delay imminent due to the injury, a doctor was called and told The King to stay in bed for a day or two.

Stuck inside, Elvis asked his cousin Billy to stay with him in his room, where they chatted about family among other things.

But then around three days later The Colonel came over and went up to Elvis’ room. 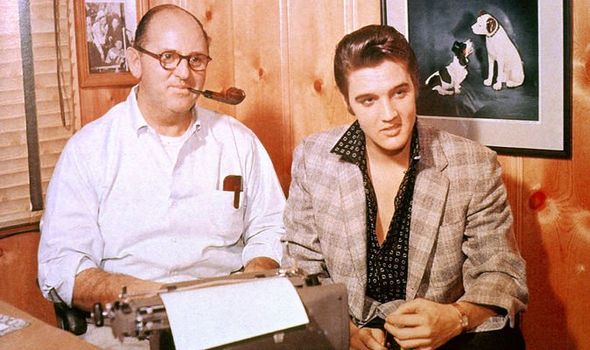 The Colonel asked Billy to leave the room so he could talk business with Elvis, which he agreed to.

The King’s cousin remembered: “After a few minutes I heard the volume go up in both of their voices.

“Through the door, I couldn’t really tell what they were saying, it was really hard.”

After the confrontation, The Colonel left and Billy went back into the room where he found Elvis rather quiet and subdued.

Elvis said to Billy: “Damn, the next thing I’ll be working for Colonel.”

The King’s cousin asked him why and the star replied: “Ah The Colonel got all upset because I couldn’t go to the studio and start filming the movie.

“Things are getting pretty tight. I’ll probably have to let some people go. Of course, I’m not talking about you.”

And shortly after that Elvis lay off a couple of Memphis Mafia members to cut his costs.

Billy reckons it was this meeting when The Colonel renegotiated his cut to 50 per cent.

The King’s cousin added that after that, “Elvis [became] a little more distant towards The Colonel in a manner of speaking.”

While admitting: “I had a lot of respect for The Colonel, because The Colonel was always good to me. I never had any problem”

“He used to take me out to grocery stores and buy me steaks.”

Earlier this year Express.co.uk spoke with Elvis expert Todd Slaughter, who appeared in the last footage of The King before his death.

The president of the UK Elvis fan club clarified that The Colonel took 25 per cent of The King’s earnings, which was the industry standard at the time.

He claimed there was in fact only a 50 per cent split when it came to licensing and merchandise.

The Elvis expert insisted: “But it was never a 50/50 split on his earnings.”