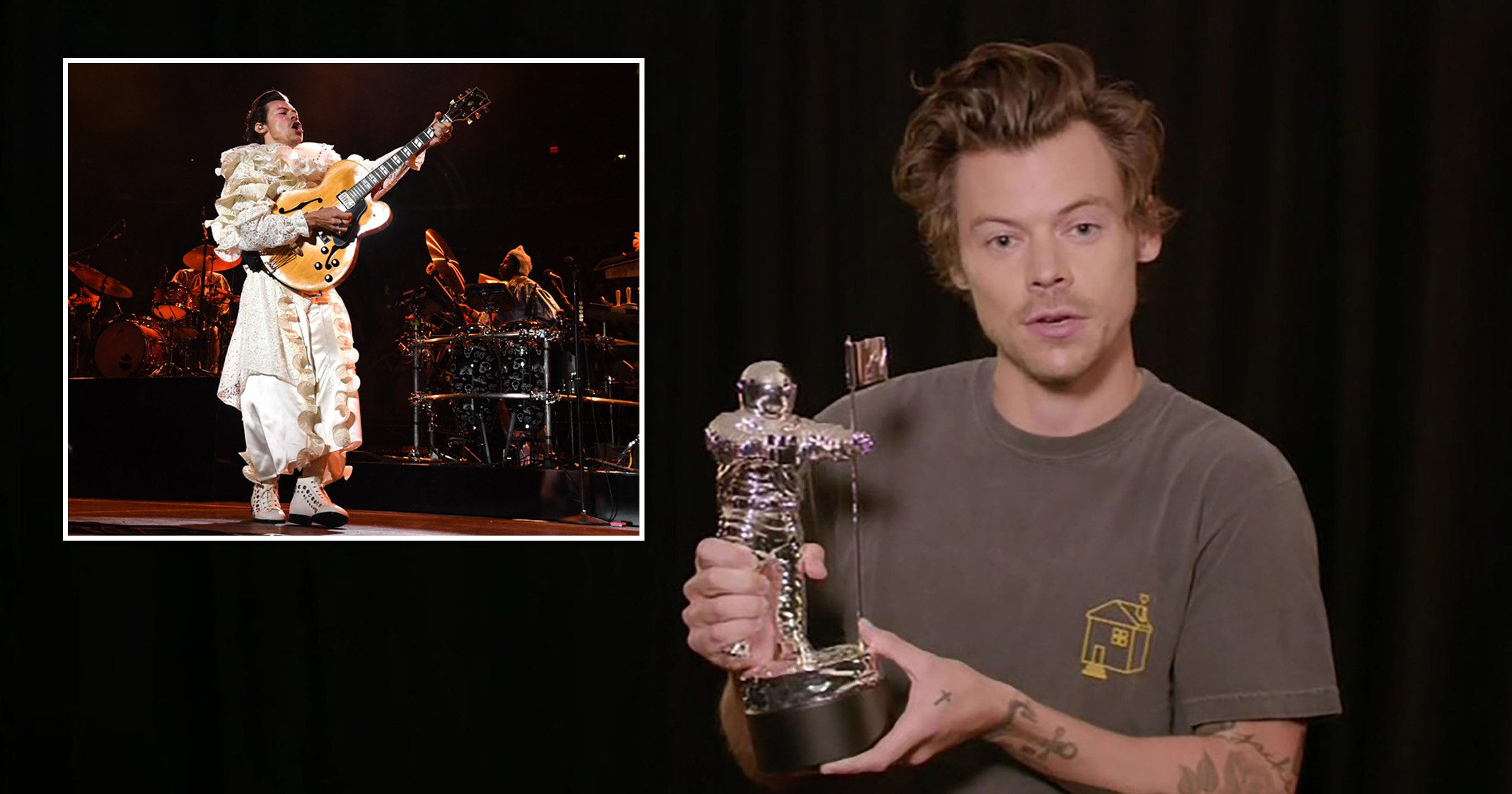 Harry Styles nabbed one of the biggest awards during this year’s MTV VMA ceremony, however, he couldn’t accept the honour in person as he was performing at Madison Square Garden.

The As It Was hitmaker, 28, was forced to make a virtual appearance after scooping album of the year for his critically acclaimed Harry’s House.

Styles became the first British winner of the night and fought off competition from the likes of Adele, Billie Eilish and Drake for the accolade.

Thank you so so much for this award,’ he said during his speech.

‘I know this is a fan voted award (and) I wouldn’t be holding this if it wasn’t for you. I hope you’re having a great night.’

He continued: ‘I’m sorry I can’t be with you there tonight, I’m about to go onstage just down the road. But I hope you’re having a wonderful evening, and thank you so much.

The former One Direction musician is currently embarking on his Love On Tour tour across the United States, and he’s set to perform for 10 nights at the iconic Madison Square Garden in New York.

And despite being pelted with a chicken nugget, it looks like he’s having the time of his life so far.

We’re going to be seeing a lot more of the heartthrob in the next few months as he’s starring in the upcoming British drama My Policeman, where he plays a young officer in the 1950’s forced to hide his sexuality.

He’s also featuring in the psychological thriller Don’t Worry Darling, alongside Florence Pugh, which is set for release in September.

Other memorable moments of the night included Taylor Swift’s bombshell announcement of her 10th studio album.

Elsewhere, Johnny Depp made a surprise comeback and joked about ‘needing the work’ as his face was projected onto the head of a moonperson, while Nicki Minaj later performed a medley of some of her biggest hits.

Artist of the Year

Song of the Year

Adele – Easy on Me

Billie Eilish – Happier Than Ever WINNER

Album of the Year

Video of the Year

Push Performance of the Year

November 2021: Nessa Barrett – I Hope Ur Miserable Until Ur Dead

December 2021: Seventeen – Rock With You WINNER

Harry Styles – As It Was WINNER

Eminem and Snoop Dogg – From the D 2 the LBC

Future featuring Drake and Tems – Wait for U

Nicki Minaj featuring Lil Baby – Do We Have a Problem? WINNER

Jack White – Taking Me Back

Avril Lavigne featuring Blackbear – Love It When You Hate Me

Måneskin – I Wanna Be Your Slave WINNER

Normani featuring Cardi B – Wild Side

Summer Walker, SZA and Cardi B – No Love (Extended Version)

The Weeknd – Out Of Time WINNER

BTS – Yet to Come (The Most Beautiful Moment)

Billie Eilish – Happier Than Ever: A Love Letter to Los Angeles

Harry Styles – As It Was WINNER

Normani ft Cardi B – Wild Side

Harry Styles – As It Was

Coldplay and BTS – My Universe

FKA twigs featuring The Weeknd – Tears in the Club

Harry Styles – As It Was

Normani featuring Cardi B – Wild Side

The Weeknd – Take My Breath