Heres What We Know About Kanye Wests New Album

After separating from Kim Kardashian earlier this year, Kanye West may be ready to release new music soon. Not long after the divorce news hit the internet, rumors of Kanye recording music in Hawaii soon followed, leaving fans speculating on how great his “breakup album” would be. “Me listening to Kanye West’s divorce album,” someone wrote on Twitter, sharing a meme of SpongeBob floating in the air. “I’m really excited to hear what Kanye is working on in Hawaii,” someone else wrote. “I believe we’re getting closer to an album, and with his recent divorce, I can only assume he’d want to express himself through his music.”

Given the fact that West dropped his critically-acclaimed album “808s & Heartbreak” after the death of his mother, Donda West, and the end of his engagement with Alexis Phifer, it’s easy to see why fans are now expecting a similar project post-divorce. And according to all the recent social media frenzy, it seems like Kanye may have a new album in store after all. Find out more below. 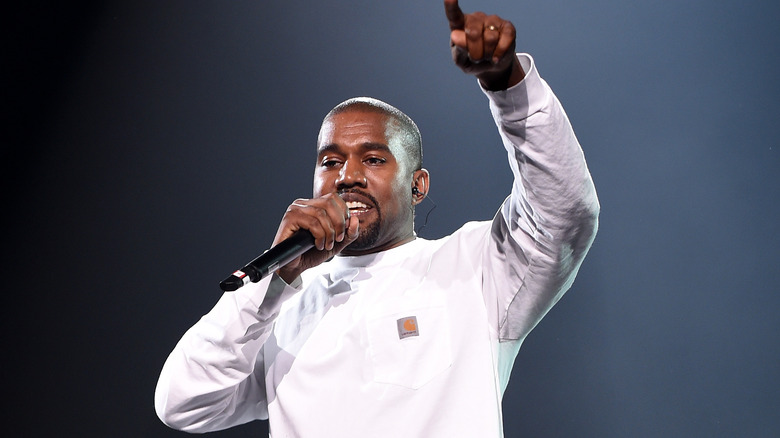 On the weekend of July 17, Kanye West made an appearance at the BIG3 basketball tournament in Las Vegas, wearing a ski mask to hide his face, per the Daily Mail. That same day, Kanye was seen hanging out with social media personality Justin LaBoy. And, apparently, Kanye gave Justin a sneak peek at his new album.

“Kanye played his new album for me & @KDTrey5 last night in Vegas,” Justin tweeted on July 18. “Man listen! The production is light years ahead of it’s time, and the bars sound like he’s broke & hungry trying to get signed again. Any artist who plan on dropping soon should just push it back.” Later, the entertainer also revealed that Kanye’s new project could be arriving as early as this week, featuring an exciting collab with Lil Baby. “This Kanye x Lil Baby record so crazy,” Justin wrote. “Y’all gon leave that mf on repeat ALL DAY & NIGHT.”

Kanye seemingly confirmed the rumors by hosting a surprise listening party on July 19. Though phones weren’t allowed, those in attendance shared their early reviews. “JUST LEFT THE LISTENING PARTY FOR DONDA AHHHHHH!!!! @kanyewest BRUH. MY GOAT NEVER DISAPPOINTS,” one person tweeted. “Kanye spit his s**t. It’s how he felt about the last few years,” another commented. According to the attendees, Kanye’s new album, “DONDA,” will be featuring Travis Scott, Baby Keem, Westside Gunn, Lil Baby, Pusha T, and more. It is rumored to release on July 24. We can’t wait!