Travis Scott has denied claims that he cheated on Kylie Jenner with model and social media influencer Rojean Kar.

Rojean, who goes by Yungsweetro on Instagram, denied rumours that she was involved with Travis back in 2019, but this week speculation started to spiral again when she posted a video to her Instagram where she could be seen on a set with Travis in the background.

Responding to the video, Travis denied any cheating and claimed to not know who she is.

Taking to Instagram to defend himself, the rapper said: "A lot of weird s**t going on. An uninvited person was sneaking photos on what was supposed to be a closed set while I was directing a video."

He added: “I’m saying this for the last time: I don’t know this person. I’ve never been with this person. So, please stop with the continuous cyber games and the fictional storytelling.”

But Rojean then hit back at Scott's response, posting a video where she said: "I pretended I didn’t know you when I went along with whatever f**king narrative you guys wanted to, no matter how much bulls**t I got from it.

"But to say you don’t know me, and you’ve never been with me, when you’ve definitely been with me. … when I have pictures and videos of you with me. Come on.”

As Travis continues to deny any cheating allegations, here's a timeline of his relationship with Kylie Jenner.

When did Kylie Jenner and Travis Scott start dating?

Rumours that Kylie Jenner and Travis Scott were dating began in April 2017 when the pair were spotted together at a Coachella party.

Later that month they were also pictured sitting courtside at an NBA playoff game in Houston, with a source telling People that they "definitely looked like a couple cuddled up next to each other among her friends”.

E! News also reported that at the end of the month they spent some time together in Boston, where Travis was playing two shows, and that the couple left Bijou nightclub together.

A source also confirmed their romance to them, saying: "It's real."

After being seen together multiple times in April, the couple's romance appeared to blossom quickly, and by May they had even got matching tattoos.

After being reported to have been "all over each other" while attending Khloé Kardashian's 33rd birthday party at TAO in LA, an insider revealed more about their romance to People.

They said: "They recently got matching butterfly tattoos on their ankles that they were showing off to their friends and family,

"They were super affectionate and Travis was constantly kissing her on the cheek and whispering in her ear. Their relationship seems to be getting stronger and they're closer than ever."

Kylie previously had an ankle tattoo dedicated to her ex, Tyga, but had it transformed from a lower case "t" into a cursive lower case "la".

In September 2017 it was reported by multiple outlets that Kylie Jenner and Travis Scott were expecting their first child.

A source told People: "It is an unexpected but completely amazing turn of events that she could not be more excited or thrilled about."

While Page Six reported that she was expecting a girl, with an insider telling them: “She has been looking pregnant for about four months."

Back in June Travis had also tweeted: "Legit happiest day of my life", but fans didn't associate the tweet with a potential pregnancy until months later.

Despite the increasing number of reports, the couple refused to comment on any pregnancy rumours at the time.

In October 2018 Kylie sparked rumours of a secret wedding when she posted a video of Travis performing on Saturday Night Live to her Instagram story, writing "hubby" across the video.

In December 2018 Travis also referred to Kylie as his "wife" when he addressed fake pictures of him "cheating" on Kylie that surfaced online.

Responding to an Instagram post that showed a man who looked similar to Travis getting cosy with another woman, the rapper wrote: "S**t cap ass f**kkkk TMZ ain't post this s**t. Trolls working hard today. I don't be on balcony wit no thots. That s**t lame. Try again u trollssss. Me and my wifey sturdy. Back to celebrating!!!" 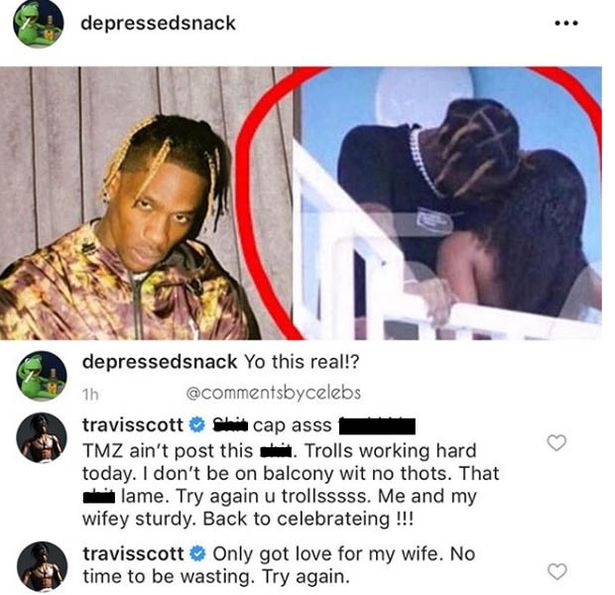 He also commented: "Only got love for my wife. No time to be wasting. Try again."

However, the couple have never confirmed their marriage status following the rumours of a secret wedding.

After six months of speculation it was finally confirmed that the couple had welcomed a baby girl named Stormi together on February 2, 2018.

Confirming the news on her Instagram two days later, Kylie wrote: “I’m sorry for keeping you in the dark through all the assumptions. I understand you’re used to me bringing you along on all my journeys.

"My pregnancy was one I chose not to do in front of the world. I knew for myself I needed to prepare for this role of a lifetime in the most positive, stress-free, and healthy way I knew how.

"There was no gotcha moment, no big paid reveal I had planned. I knew my baby would feel every stress and every emotion so I chose to do it this way for my little life and our happiness.”

She also released an 11-minute video documenting her secret pregnancy.

The couple hit a rough patch in March 2019 when it was reported that Kylie had accused Travis of cheating on her.

TMZ reported that Travis had cancelled his Astroworld concert in Buffalo to deal with the allegations and that he also deleted his Instagram account to prove his devotion to Kylie after she found "suspect messages".

But Travis' rep later shut down the publications claims, stating that the rapper "strongly" denies any allegations of cheating.

They also said that the couple were not in a fight and that "the reason he stayed home from his show tonight was very much because of illness".

Following the rumours the pair's relationship continued to appear strong as Kylie called Travis her “real life bestie & hubby wrapped into one” while wishing him happy birthday the following month.

Following the cheating rumours, Kylie and Travis continued to make public appearances and even did an interview for Playboy magazine about their sex lives together.

However, in October 2019 it was reported that the couple had decided to take a break with their relationship.

A source told People that "they are taking some time but not done".

They added: “They still have some trust issues but their problems have stemmed more from the stress of their lifestyles.”

TMZ reported that "their new relationship status is … complicated, but single".

After months of speculation that the couple had been rekindling their romance, including flirting over Thanksgiving and quarantining together in Palm Springs in April, Entertainment Tonight reported in May 2021 that Kylie and Travis were back together.

A source told the publication: "Kylie and Travis are messing around and having fun together.

"They've always had a strong connection and chemistry and they're exploring their relationship romantically again."

By June the couple had started making public appearances together again, attending a benefit together with their daughter Stormi.

It wasn't long after their reconciliation that it was revealed the couple were expanding their family.

Page Six were first to report the news, with sources telling them the family was "thrilled".

TMZ also reported that Kylie was at the "very early stages" of her pregnancy.

The news didn't come as too much of a surprise to Kylie's fans, with the reality star previously opening up about her desire to have a big family, once even revealing that she possibly wants up to seven children.

Early this year the couple welcomed their second child together – their first son.

They originally named their son Wolf Webster but weeks later they revealed that they had decided to change the name because "it didn't feel right".

However, Kylie and Travis are still yet to confirm what their sons name is now, despite the fact that he's already eight months old.

In July this year Kylie sparked rumours of an engagement to Travis once again as she showed off a huge rock on her ring finger as she cuddled up to the rapper in a video posted to her TikTok.

The post came months after fans speculated that the couple had got engaged when Kylie uploaded a series of snaps of her and Travis enjoying a romantic sunset together.

However, the couple have still kept quiet on speculation of their engagement/marriage status.