It’s fair to say that when one thinks of Meghan Markle nowadays, it’s typically a picture of her standing next to her husband Prince Harry, dressed demurely, and with an easy smile.

But that wasn’t always the case, as the Duchess of Sussex had her fair share of saucy scenes when working as an actress.

From a racy oral sex scene to raucous sex in an office storeroom, it seems Meghan really has done it all – everywhere. But what does the Queen think of her racy past? And how is the Palace tackling a potential sex scene of Meghan and Harry coming to light?

To celebrate Meghan’s birthday, Daily Star is taking a look back at the Suits star’s raciest scenes ever. Hold on to your hats – it’s going to be a humpy ride.

Meghan played Wendy for just two episodes, but made an indelible mark on the landscape with her oral sex scene in the very first episode of the show.

Main character Annie (Shenae Grimes) is making her way into West Bev high school for the very first time after moving to LA from Kansas, and is shocked to see her old pal Ethan (Dustin Milligan) in his car, looking flustered.

But his distraction is soon explained, as Meghan’s character Wendy pops up from where she was performing oral sex on him, with her brunette locks falling over her face as she wowed in an off-the-shoulder top.

Allegedly Meghan was “hesitant” about filming the scene initially,

One unofficial biography of the royal claimed: “In a two-episode arc on the CW reboot of 90210, in 2008, her character, Wendy, stirred up trouble when she was caught giving oral sex to playboy student Ethan Ward in a school parking lot.

“Meghan was hesitant to shoot the scene, but struggling actresses can't be picky.”

Suits fans the world over can’t scrape that one scene from their minds no matter how hard they try, a Reddit thread proved.

The scene shows Meghan’s character Rachel romping with Patrick J. Adams’ Mike, filled with breathy moans as Mike hoists Rachel up against a filing cabinet and continues to thrust into her.

The pair were closer than ever in the saucy scene in their legal offices, with Rachel tossing her head back in pure ecstasy.

In an interview with talk show host Larry King, the co-stars were asked: “What has been your favourite scene to film together? And where do you see the characters in five years?”

Patrick responded: “I feel like saying the last scene of last season where we got very intimate in a file room in the office.

"It was a sex scene, it was the culmination of a lot of pent-up emotions."

As Meghan chimed in: “It was what people wanted to see from Mike and Rachel, and it happened in a file room.”

Both actors admitted it was “terrifying” to film, with Meghan adding that it was “weird” simulating sex with her pal.

The scene was actually a comedy webisode filmed for Suits, which saw Louis take part of the file room romp before Mike sits up gasping in bed, sure that it had all been a dream.

But Louis soon appears at the side of the mattress alongside him.

Speaking of the hilarious encounter, Meghan told Daily Star back in 2018: “We did these things called “web-isodes” for Suits which gave us the opportunity to be playful. There’s one I did which is great.

“It was a re-enactment of the moment my character Rachel got together with Mike Ross in the file room.

“But this time we did it in Spanish! We could be campy and silly. You have got to see it! It’s on YouTube. It’s really fun.”

Scenes hidden from the Queen

According to one royal biographer, any racy scenes from Suits were cut out when Harry was showing the programme to his grandparents, Queen Elizabeth and Prince Philip.

He said: “Obviously not some of the love scenes between Meghan and Patrick J. Adams. Like the sex in the filing room and so on.

“I do find it amusing that those raunchy scenes Meghan appeared in on ‘Suits’ and other movies are on the Internet, and yet she’s scrubbed clean her blog, which includes essays on female equality…

“She also got rid of her Instagram, which had some charming shots of her.” 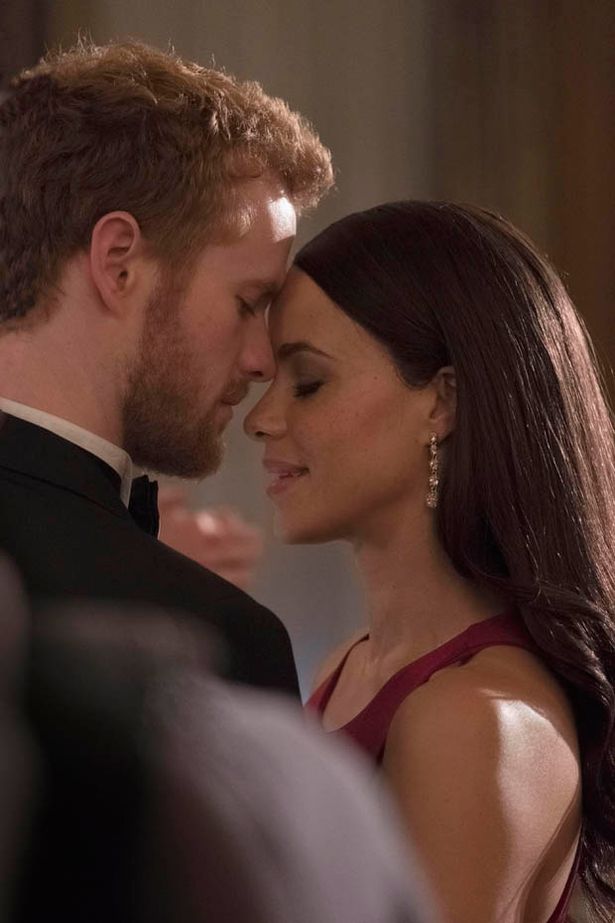 In 2018, it was reported that Buckingham Palace were “seriously worried” about a potential on-screen sex scene portraying Meghan Markle with her husband Prince Harry.

A fictional Lifetime movie entitled Harry & Meghan: A Royal Romance documented their love story the year of their marriage, and featured a sex scene between its main stars.

With Meghan portrayed by Parisa Fitz-Henley and actor Murray Fraser taking on the role of Harry, things quickly got steamy – though not in a very ‘worrying’ way.

It turns out the film just showed the naked pair cuddled up under the sheets, with only their bare shoulders showing, though the flick also features a bit of snogging and heavy petting.

The film’s director told Vanity Fair at the time: “What I’ve heard is that they’re seriously worried about the sex scene,” information he gleaned through “my wife’s best friend who has been dating the press secretary of the palace”.

Producer Merideth Finn joked of the film: “Let them worry. People have sex.”