Out Of Every Rihanna Hairstyle, One Look Stands Above The Rest

If we could describe Rihanna’s style in three words it would have to be: “We Found Love.” No star takes as many risks — and effortlessly pulls them off — like the Grammy award-winner does. She has braved big business decisions (hello, Fenty Beauty), shown off a makeup-free face for Harper’s Bazaar, and even bared all by exposing not only her behind, but also her breasts, in a sheer Swarovski-crystal-encrusted gown, per Elle. But the chameleon of style also keeps us on our toes when it comes to her tresses, having debuted almost every hair color and look imaginable. Rather than be known for a single hairstyle, Rihanna’s ever-changing locks have seemingly become her signature. Her long-standing hairstylist, Yusef, even previously said, “Her individuality is what made her into the icon she is today,” per Elle.

When an 18-year-old Rihanna released “Pon De Replay” in 2005, she gave off girl-next-door vibes with glittery makeup and sleek, straight bangs. Then, a few years later, Rihanna said goodbye to fresh-faced innocence and hello to Bad Girl Rhi Rhi as she chopped her youthful long locks for an edgy “R-Rated” pixie cut. Since those more dramatic transformations, she has stepped out with Ariel-colored red hair, sported a mullet, dip-dyed her hair blonde and shown off a shaggy lob — all of which she absolutely slayed, of course. But, while her effervescent style is the source of much hair inspo, there’s one particular look we believe takes the cake. On anyone else it would look pretty unremarkable, but because it’s Rihanna, it was a showstopper. 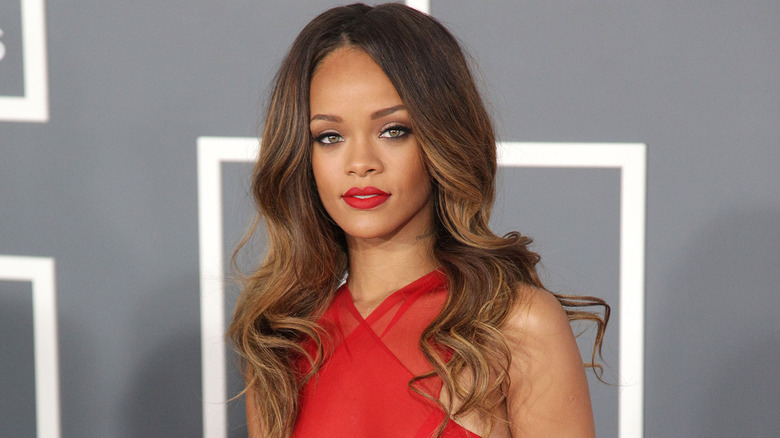 When Rihanna walked on the Grammys red carpet wearing a sheer gown — after being told specifically not to — she threw shade at the haters by styling her hair in the most sophisticated and elegant way. Perhaps not her most daring of hairstyles, Rihanna surprised all by showing off her feminine style in 2013 after a string of dramatic frocks and dos. Just a week before music’s biggest night, attendees received word of not being able to wear “see-through clothing that could possibly expose female breast nipples” among other dress stipulations, per The Telegraph. While Rhi Rhi didn’t adhere to such negligible restrictions, she looked relatively lady-like — even with her nipples (and their piercings) on full display. Wearing a sheer, red custom Azzedine Alaïa gown, Rihanna toned down the bad girl look with lust-worthy long and glamorous caramel-colored ombre waves. She surprisingly center-parted her hair — she’s usually one to go for that side-swept look — and wore simple, dewy makeup, including a classic red lip.

The Real Style Network said they were “pleasantly surprised” by Rihanna’s “softer side,” PopSugar called it “angelic,” while Marie Claire declared it to be one of her most “iconic” looks of all time. Since then, Rihanna has embraced her femininity a few more times during various Met Gala appearances. Despite currently sporting a familiar ultra-chic pixie cut, it’s just a matter of time before Rihanna surprises us again. We can’t wait.