Ruel: ‘It’s weird to think it is normal, even though I know it isn’t’

The first thing you notice about Ruel Vincent van Dijk – simply Ruel, to his adoring fans – is his height. At 16, the London-born, Sydney-raised singer-songwriter stands at about 195 centimetres if puts on his black leather bucket hat, which he does during this interview when searching for something to fidget with.

Walking into a boardroom at Sony’s East Sydney offices and extending his hand with a friendly smile, he’s as boyishly handsome in real life as he is in photos, dressed in a black collared shirt with ornamental zips, black pants and an over-sized black blazer. With wisps of hair framing each side of his face, and a nervous laugh that punctuates many of his answers, he seems every inch the school kid – only he left student life behind last year when he completed year 10 at Cremorne’s Redlands Grammar School. 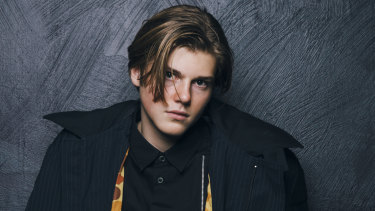 Sixteen-year-old Sydney boy Ruel Vincent Van Dijk, who goes by the stage name of Ruel, is now one of the hottest performers on the planet, championed by the likes of Elton John. Credit:James Brickwood

“I did all my exams and passed all of them so I could legally leave,” he says, acknowledging that he hopes to return and finish year 12 “if things start to slow down”. “On my American tour [last year] I was having to do exams an hour before the show, so that got pretty hectic.”

There are elements of school he misses. “I really miss English. Going into English class and analysing a poem or book, I found that so much fun. Science,” he says, screwing up his face. “I’m so happy I’m not doing that anymore. When it came to biology and chemistry, I had no interest. Why do I need to know how it works? I’m just happy that it does.”

An inquisitive student “if I’m interested in the subject”, by the end of his tenure at Redlands life in the schoolyard was getting weird. “I’d come out for recess and there’d be year 8s or 9s asking me for photos, and that got pretty strange,” he says. “It just got awkward with my friends.”

Earlier this year, Ruel became the youngest ever male performer to headline and sell-out the Sydney Opera House – a feat he managed on two consecutive nights. He invited a group of those friends on the second evening, and laughs when recalling their reaction as a roomful of predominantly teenage girls screamed for Ruel at a pitch and volume that must surely have sent Sydney’s dog population into a tailspin. “I just saw nine dudes sitting down being like, ‘What is happening? Why do these people like you?’”

Born in London to an advertising executive father and film industry mother, Ruel’s family moved to Sydney when he was “three or four”, setting up home on the northern beaches. His first musical memory is bashing away on his dad’s electronic drum kit and his first live performances were recitals at the Big Music instrument shop in Crows Nest, where he took singing and guitar lessons.

By 10 his brain was flooded with music, thanks largely to his “music nerd” father who had introduced him to artists such as Kendrick Lamar, Dave Brubeck, Amy Winehouse, Bill Withers and British singer-songwriter James Morrison, the latter providing the inspiration for Ruel to start learning guitar at the age of eight. “But I never thought of it as a career,” he says. “I never thought of it as anything I could actually do. I was just thinking about becoming a professional NBL basketball player.”

All that changed at the age of 12 when his father met Melbourne-based manager Nate Flagrant, with whom he was working on an ad campaign, and handed him a demo of his son performing a cover of James Bay’s Let It Go. Enthralled by what he heard, Flagrant played it to Grammy Award-winning producer M-Phazes, and the two took the young vocalist under their collective wing, spellbound by this boy with the voice of a weathered soul singer. “I never really had a goal,” says Ruel. “But they opened my mind about this life I could live if I worked hard and gave it my best shot.”

For the next three years, Ruel developed his songwriting with Flagrant and M-Phazes, eventually releasing his debut single, Golden Years, in 2017. His real breakthrough came later that year when he became the youngest artist to perform on Triple J’s Like A Version, singing Golden Years and a cover of Jack Garratt’s Weathered with M-Phazes.

Within 48 hours, the video of that performance had received more than half-a-million views, and Flagrant started fielding calls from American record companies. Before long, Ruel was in the US meeting with labels, tasked with convincing them to take a chance on him.

He’d performed in front of intimidating crowds before. As a 10-year-old he started busking at the Corso in Manly, and laughs when he recounts the time “a full ex-bikie” with “tattoos over his face” approached him ominously, only to start dancing when Ruel started playing an Ed Sheeran cover.

This, however, was next level scary. “You’d walk into a conference room, you’d be squashed into a corner, all these execs would come in, they’d all have their phones and notepads, and they’d sit down and look down,” says Ruel. “And the dude who invited me would be the only charismatic one – he’d be like [enthusiastically], ‘OK, you want to sing your first song, Ruel? This is Ruel, guys, this is Ruel! The next big thing!’ And I’d be like, ‘What is happening?!’

“And I just remember singing Golden Years and [second single] Don’t Tell Me, Stay by Rihanna and Who Did That To You? by John Legend. After each song there would be, like, a very awkward, slow clap.”

On occasion, Ruel would arrive at his hotel prior to one of these meetings to find a gift from a prospective record label. “There’d be a big platter, like a cheese platter,” he says, smiling. “And I was like, as a [kid], 'What the f— is Brie?'”

Having since signed an international record deal with RCA/Sony Music ANZ, Ruel is now arguably one of the hottest performers on the planet. He’s been championed by Elton John, who played Don’t Tell Me on his Beats 1 radio show and requested a meeting with Ruel last time he toured Australia.  He’s performed at festivals such as Coachella and sold out shows throughout the UK, Europe and Asia. Last year he became the youngest ever performer to win an ARIA, taking home Breakthrough Artist. Ruel's global streams to date tally more than 300 million – a figure that will surely multiply with the release of this month’s Free Time EP, the follow-up to last year’s Ready.

On October 29, Ruel will celebrate his 17th birthday by playing a show in Atlanta; he was performing in London on his 16th. He estimates that the three or four weeks he spent in Sydney prior to a recent trip to America were the longest he’d been home for a year or two.

The title of his new EP is, you may have guessed, ironic. It also speaks of a teenager coming to terms with his new life. “The weird thing is I’m always away from home, but I still get free time. I always have a designated day off and I’m like, ‘OK, now what the hell do I do?’ That’s where [the title] came from – going from all this craziness to absolutely nothing and not really knowing what to do.”

In the past, Ruel has said his songwriting involves an element of exaggeration. When he wrote his first songs, he didn’t have enough life experiences on which to draw. While he still has to rely on fiction occasionally – the track Real Thing off his new EP is inspired by the scene in High Fidelity when John Cusack’s Rob proposes to Iben Hjejle’s Laura – the massive changes he’s experienced over the past 18 months means he’s no longer short of real-life inspiration. Although that has provided Ruel with another issue. “I feel like it’s harder to write relatable songs with the life I’m living now," he says. "It’s a pretty weird lifestyle, and I’m still kind of grabbing onto the things I was doing at school and trying to look back [to find events people could relate to].”

Amongst the soul and R&B-inflected pop on Free Time is a gospel-tinged piano ballad called Hard Sometimes. An astonishingly frank account of the downside of his sudden ascent to fame, it features lines such as “I try to be happy but it’s hard sometimes” and “I’ve been on the road, I’ve been missing home, see it on my phone that the world back there keeps spinning round without me.”

“I had my first experience touring overseas and really missing home,” he explains of the lyric. “I was always the centre of attention onstage or doing meet and greets, but as soon as I got to my hotel room it was just [clicks fingers] nothing, and I’m all by myself with my thoughts. It’s definitely unhealthy, those extreme opposites.”

He says he’s prone to over-thinking, and those moments of sudden solitude can set his mind racing. “If you’re alone with your thoughts for too long, bad things can happen. I start to think about something and make something out of nothing. And I just focus on one thing and think of all the terrible things that could happen from that.”

He’s been developing coping mechanisms, such as leaning on the company of his team a little more. “Just asking, ‘Do you want to come over to my room and play some FIFA? You wanna do something?’ I just try to spend as little time completely in dead silence as possible.”

The song also demonstrates Ruel’s knowing self-awareness that his life is no longer that of your average teen. A few months ago he was near Kanye West as the rapper delivered his Sunday Service at Coachella; last November he was invited to play alongside Lauryn Hill and Post Malone at the Camp Flog Gnaw Carnival festival, which is curated by one of his idols, US hip-hop star Tyler, The Creator. The lyric “But life just seems to happen right before my eyes” sums up that idea that these abnormal events have become the everyday. “It’s weird to think that it is normal, even though I know it isn’t,” he offers. “I’m definitely weirdly trying to get used to it.”

He admits to feeling bouts of intense pressure when he sees his schedule “on an e-mail or piece of paper”, and says he’s still trying to work out how to maintain perspective as the world around him is changing. “I try and maintain it by talking to people who’ve been there from the start – friends, family, people in my team, my manager. I don’t feel like I’ve changed at all since I was a kid. I’m just living a different life to most people.”

On the rare occasions he’s home long enough to catch-up with friends, it’s a life he prefers to avoid talking about in favour of hearing what his mates have been up to. “I really just want to know what they’ve been doing,” he says. “And I guess that kind of helps me stay grounded. [When I’m working] I’m always talking about what I’m doing. So I prefer to throw it over to my friends when I come back and just want to know…”

“…who got with who on the weekend and shit like that. Stupid stuff.”

Free Time is out now. Ruel plays the Fortitude Music Hall, Brisbane, on September 19; Festival Hall, Melbourne, on September 24; the Hordern Pavilion, Sydney, on October 3; and Wollongong’s Yours & Owls Festival on October 5. For a full run of dates go to oneruel.com