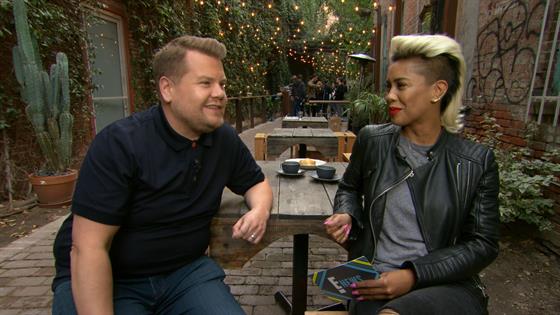 The 2020 Grammy nominations are here!

The nominations for music’s highest honor were announced on Wednesday morning, with your favorite stars like Ariana Grande, The Jonas Brothers, Shawn Mendes, Ed Sheeran, Chance The Rapper and Lady Gagaall scoring big.

Among her five nominations, Grande is tapped in the coveted Album of the Year category for Thank U, Next and is nominated alongside Sheeran in the Best Pop Vocal Album category. The Jonas Brothers are up for Best Pop Duo/Group Performance for “Sucker,” with Mendes and Camila Cabello also snagging a nomination in the same category for their collaboration, “Señorita.” Chance The Rapper is tapped in the Best Rap Song for “Bad Idea,” and Lady Gaga is still raking her A Star Is Born successes with nominations in the Song of the Year, Best Compilation Soundtrack For Visual Media and Best Song Written For Visual Media categories.

What do all these stars have in common, you might ask? They’ve all done a segment of James Corden‘s “Carpool Karaoke,” of course! To celebrate their nominations this fine morning, let’s take a trip down “Carpool Karaoke” memory lane.

Grande’s 2018 “Carpool Karaoke” with Corden came accompanied with a hilarious stop in a Starbucks, where she did, indeed, order a Grande-sized drink.

The singer’s segment came in 2017 and featured the two Brits hilariously competing to see who could fit the most candy in their mouths, plus a hilarious story about Justin Bieber.

The “In My Blood” singer treated fans to his segment with Corden in June 2018, where he showed just how much of a Harry Potter stan he really is.

Not long after they announced their highly anticipated reunion, Nick Jonas, Joe Jonas and Kevin Jonas hopped into Corden’s car in March 2019 where they spilled a bunch of Jonas family secrets, and yes, even the story behind their purity rings.

The talented rapper’s turn in Corden’s car came in October 2019. In the video, he gushed on what it’s really like to hang out with Kanye West (who finally did his own “Carpool Karaoke” on a plane later that month.

Gaga’s “Carpool Karaoke” came during her Joanne era. During the segment, the singer blew away Corden and viewers with her impressive pipes and yes, her pink cowgirl hat made an appearance.

Congratulations to all of this year’s nominees!