After receiving a sweet message from Taylor, the 63-year-old musician thanks the ‘Look What You Made Me Do’ songstress for her inspiring ‘fire and support.’

AceShowbiz –Taylor Swift has congratulated Anita Baker on the latter’s achievement. After the “Sweet Love” singer announced that she finally gained control of her master recordings, the “Cardigan” songstress took to social media to give her a special shout-out.

On Friday, September 3, the 63-year-old musician shared on Twitter a picture of her first 5 albums, “The Songstress”, “Rapture”, “Giving You the Best That I Got”, “Compositions” and “Rhythm of Love”. Alongside the snap, she wrote, “All My Children Are Coming Home… Impossible Things Happen … Every. Single. Day. Gratefully.”

On the next day, Taylor quote-tweeted Anita’s post and gushed, “What a beautiful moment, CONGRATULATIONS ANITA!!” Having caught wind of the “Look What You Made Me Do” hitmaker’s tweet, Anita replied, “Thank You, for Your *Fire & Support!! It Inspires us all, to move Mountains.” 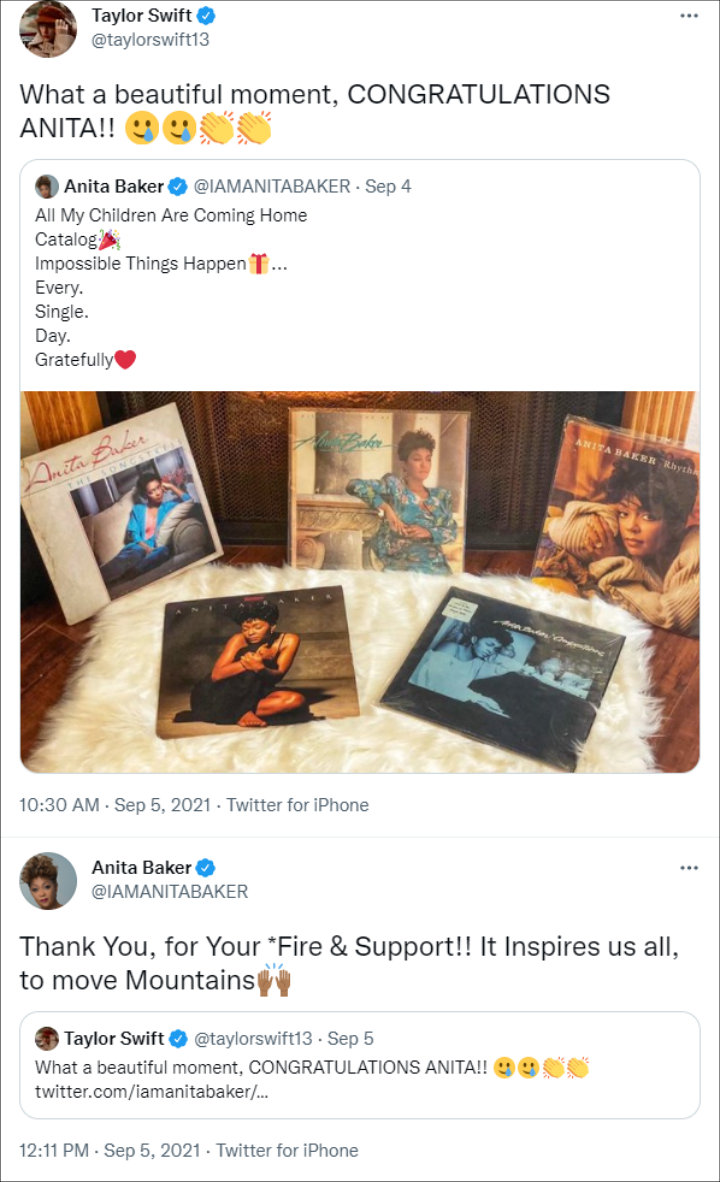 Taylor Swift and Anita Baker soaked in a friendly exchange as the latter reclaimed her masters.

This was not the first time Taylor and Anita soaked in a friendly Twitter exchange amid their fight to take back control of their music. In March, Anita first explained that “miraculously,” she had “out-lived *ALL, of [her] Artist Contracts.” However, she noted, “By Law… 30yr old, Mstrs are 2B Returned, 2 Me Unfortunately, They’re gonna make me Fight 4 It. I’m Prepared, 2 do that. Please Dont advertise/buy them.”

Weeks later, Anita shared a GIF of Taylor giving applause and tweeted, “Her creations bought & sold Again & Again, wouldnt even let her do *A Buy Out*…Taylor Swift *re-recording, her Catalog/Taylor’s Version. The GoodFight Go… Gurrrrl.” In response, the girlfriend of Joe Alwyn wrote, “I’m cheering you on in your fight to get back your work, and appreciate your support so much!! Thank you.”

Taylor previously tried to take control of her own masters, which were purchased by Scooter Braun from her former music label record, Big Machine. After Scooter sold them for $300 million to Shamrock Holdings in 2020, Taylor decided to re-record her first six LPs. She already released “Fearless (Taylor’s Version)” in April and has announced that “Red (Taylor’s Version)” will be released on November 19.