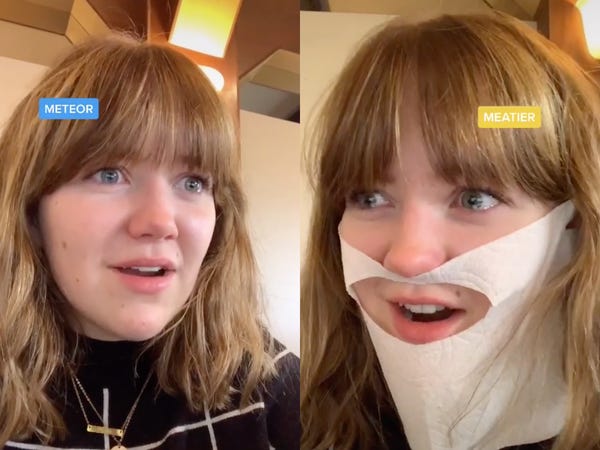 This past weekend, a joke about the death of the dinosaurs took over the internet.

In a viral video first posted on TikTok and later widely circulated on Twitter, user @lizemopetey — also known as 23-year-old Eliza Petersen — acts out a tragic misunderstanding between an angel and God that, in this scenario, leads to the death of the dinosaurs themselves.

The entire exchange hinges on a pun on the words "meteor" and "meatier," and the catastrophic consequences that ensue.

The video exploded on TikTok. Six days after Petersen originally posted it, the video has amassed approximately 3.1 million likes and 12.5 million views.

Aside from the hilarity of the exchange itself — Petersen credits the script to a viral January 2019 tweet from Twitter user @climaxximus, who BuzzFeed News reported is joke writer Cameron Tidwell — Petersen's acting and casual costuming is what sells the clip. As the angel, played by Petersen, and God, played by Petersen in a paper beard, go back and forth, there are genuine tears in her eyes.

Petersen has a background in dinosaurs, and this isn't the first time they've fueled her content

Although she says that her early content on TikTok didn't feature dinosaurs, they've now started to become a part of her brand. She posted a video on June 2 that showed her licking dinosaur bones over the years of her work — a real method that can help you determine whether you've found a fossil or a rock.

This is the REAL paleo diet 🦖 ##fyp ##foryou ##HealthyLiving ##paleontology

"I got a lot of physical criticism from that video, which was really sad because I hadn't faced that up to that point," she told Insider. "It was not a great thing to viral for, necessarily."

After that video, Petersen said that she realized that people enjoyed the dinosaur focus and that she wanted to continue to pursue it. That eventually led her to film the "meteor/meatier" video, which as she told BuzzFeed News, draws upon her community theater background.

Petersen says that she's heard the joke in the past, using both the "meteor/meatier" pun as well as a similar "asteroid/steroid" pun. She was inspired by the script laid out in @climaxximus' tweet, saying that she knew that the joke would likely resonate with people since it had been around for so long.

"That specific style of humor that isn't necessarily crude and is just kind of punny — it lasts," she said. "It's fun wordplay, it's easy to make your own spin on it, and I think that's what really makes it an everlasting joke. And I'm super grateful for Cam on Twitter for posting it in the first place. I've heard that joke for years, but I think his script is what made it so easy to play off of."

What really makes the joke sing in Petersen's performance, however, are the visible tears in her eyes as she acts out both the angel and God choking up as they realize that they've accidentally killed the dinosaurs.

"I'm a very emotional person anyway. I'm a huge empath — if I see somebody else cry, I cry," Petersen told Insider in an interview.

"And so when I had made this video, I took off the beard and I switched back to the angel and all of a sudden I was like, 'Oh my gosh, I just killed the dinosaurs. Like, I did, me personally, Eliza,'" she told Insider. She said that she considered refilming, but eventually felt like the video wouldn't get many views anyways and "left it in for the sake of being genuine."

In just a few short days, Petersen's video has not only exploded on TikTok, but become a Twitter meme in its own right. People were making vague, teary references to the "meteor/meatier" joke, while others reposted Petersen's video.

The difference between responses on both platforms showed through in a sequel video that she posted on both Twitter and TikTok. In it, God — once again Petersen in a beard (and a mask) — wandering around dinosaur skeletons while "Mad World" (the Gary Jules cover, a classic meme anthem) plays in the background.

Petersen had originally posted a version of the sequel video on both TikTok and Twitter that didn't include God wearing a mask under the beard, but made the decision to remake the video with a mask because she didn't want it to serve as an excuse for people go to in public without a mask.

While the content played out well on Twitter — her tweet has over 315,000 likes — her reupload didn't hit the same viral heights as her original "meteor/meatier" video on TikTok.

Going viral has had a definitive impact on Petersen's life

Past the social media reception, Petersen said that one of the biggest impacts of her newfound viral fame was an outpouring of support after she dropped her Cashapp in a tweet speaking about her medical bills related to ongoing breast cancer treatment. She told Insider that she's been paying hospital bills since age 19, and that her treatment plan involves mostly tracking and monitoring her cancer, which is expensive.

"I'm grateful that I have the best doctors that I could ever ask for, " she said. "But I'm not grateful that those doctors are so expensive."

She had seen people previously ask for help with student loans or other needs on social media, and decided to tweet her Cashapp as well. She didn't anticipate the level of support that she received, however, saying that it was "absolutely overwhelming."

"I've never been able to safely plan for my future medically, which is terrifying," she said, telling Insider that she would frequently stretch the time periods between treatments to mitigate the financial impact.

"After people were retweeting me and commenting and liking and sharing, it got to a point where I was able to safely plan for six months," Petersen said. "And I haven't been able to do that ever, and I've been able to pay off the past damage that it's done to me in a way that has been more impactful than any of the small payments that I had been making previously."

Petersen says that others who currently have or have survived breast cancer have reached out to her to show their support her and tell her that she's not alone.

"That's been the biggest change: the emotional support that I am not only getting from the safety of being able to pay these medical bills, but the love and kindness that I'm getting from complete strangers who are going through the exact same thing that I am, and I'm really grateful for that," she said.