The Lineup at the First Coachella Will Blow Your Mind 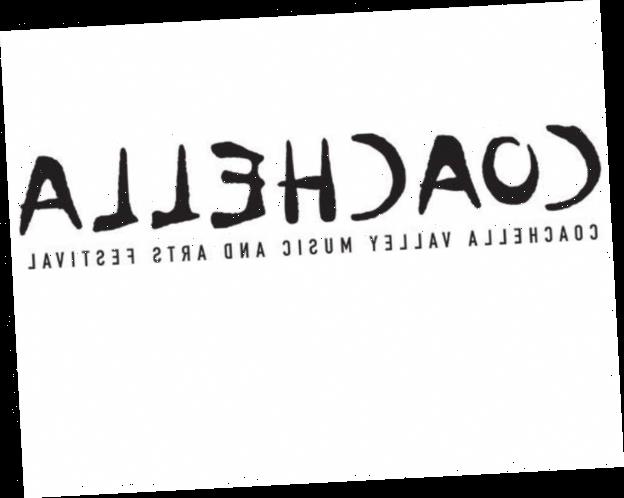 If it feels weird to be talking about the first Coachella in these early days of spooky season, that’s because…well, it is.

But however random it may seem, it doesn’t change the fact that the world-famous music festival, usually held over two weekends in early April, is actually celebrating its 20th anniversary on October 9. And unless you’re one of the few people—and we do mean few—who were present for the inaugural weekend at the Empire Polo Club in Indio, California exactly two decades ago, you probably had no idea. (We sure didn’t.) And if the fact that the whole endeavor began in an entirely different time of year has left you shook, wait until you find out what that fateful first weekend was like. Because the different date is truly just the tip of the iceberg.

Long before the flower-crowned Instagram influencers had descended upon the annual event, turning it into a place to, most importantly, see and be seen (rather than, you know, a place to listen), the Coachella Valley Music and Arts Festival was co-founded by Paul Tollett and Rick Van Santen as a way for Goldenvoice, their Los Angeles-based concert promotion company, to stay afloat against competitors who could offer higher guarantees to secure venues. Having already booked a one-off show for Pearl Jam on the site in 1993, proving the polo club’s suitability for large-scale events, an idea was born: book several cool, but not quote-unquote popular artists for one lineup, a festival with multiple venues.

“Maybe if you put a bunch of them together,” Tollett told The Desert Sun in 2011 about his idea, “that might be a magnet for a lot of people.”

The goal was to mount the inaugural festival in 1998, but plans were delayed to the following year. On July 16, 1999, Goldenvoice got the OK from the Indio City Council, who approved the festival and said they’d provide $90,000 for services like traffic control and public safety—funds that came with a guarantee of repayment from the promoter. A preliminary lineup of 40 acts was announced on July 28, just days after the conclusion of Woodstock ’99, a disaster marred by looting, arson, violence and rapes. Watching that festival descend into complete chaos left Tollett worried. As he recalled to The New Yorker in 2017,  “I’m thinking, Should we be doing this? A lot of bad things could happen.”

Nevertheless, they carried on, with tickets going on sale on August 7, just two months before the event was to take place. “Which is so stupid,” he told the publication. “To break a brand-new festival sixty days away is financial suicide. But we didn’t know that.” At $50 for each of the festival’s two days, ticket prices were a far cry from what they are today. And likely from what they should’ve been then, but more on that in a minute. 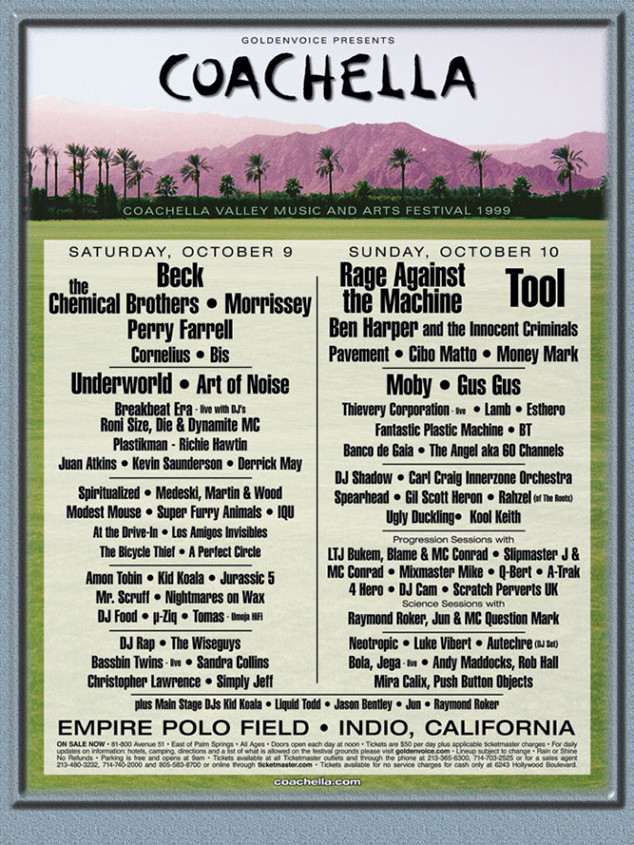 And as for the line-up? Well, it too was a far cry from the sort of list of artists that these days includes massive pop stars like Ariana Grande, Lady Gaga and Beyoncé. Headliners were Beck, Morrissey and The Chemical Brothers on Saturday and Rage Against the Machine and Tool on Sunday. There were a handful of electronic acts, like Moby and Thievery Corporation, rock bands, like Spiritualized and Modest Mouse, and DJs, like A-Trak and DJ Shadow. The late spoken-word performer Gil Scott-Heron, often considered to be the first rapper ever, was on the lineup, as was the promise of DJs like KCRW’s Jason Bentley on the main stage.

Like we said, it was much different. The festival wouldn’t dip its toes into the full-fledged pop waters it likes to swim in now until 2006 when Madonna was added to the line-up—though the poster made clear she was be “in the dance tent.”

Despite temperatures exceeding 100 degrees, the festival went off without a hitch, earning itself the title of “anti-Woodstock.” Parking was free and traffic flow was handled easily. Everyone was handed a free bottle of water as they arrived at the polo field, with free water fountains, ample restrooms and misting tents made readily available once inside. The goal of delivering a “high-comfort festival experience” was achieved. And the crowd responded to the respect in kind.

“Polite behavior is not something associated with large-scale rock festivals, but it was very much in effect at Coachella,” Rolling Stone wrote in their review of the inaugural event. “People would say ‘excuse me’ after they bumped into you, and the knots of aggressive teenagers demanding that women take off their tops were thankfully absent. In fact the only bared chests seen on Saturday were Perry Farrell and Morrissey, both of whom took off their shirts on-stage.”

Despite being an enjoyable experience for those who attended, the bigger problem was the fact that there just weren’t enough of them. Capacity was capped at 35,000 tickets for each day, but only about 17,000 sold for Saturday and 20,000 for Sunday. Despite being named festival of the year by Pollstar, the meager attendance nearly ended Goldenvoice for good. “We needed a longer campaign to get word out. It was extravagant—five stages for a startup show,” Tollett told The New Yorker, adding that, in the end, “we lost between eight hundred and fifty thousand and a million. We knew we were dust.”

The following two years were rough, with Tollett having to sell his house and car while begging acts, including the headliners to agree to deferred compensation for their appearances. Tentative plans for a festival in 2000 were ultimately scrapped, with the company partnering with EDC promoter Pasquale Rotella to stage the EDM fest Nocturnal Wonderland at the Empire Polo Club that September instead.

The festival returned as a one-day event in April 2001, in an attempt to beat the heat of the Southern California fall, with ticket prices raised to $65. With finances still a concern, Tollett sold Goldenvoice to AEG that March for $7 million, but terms of the deal meant that he would keep Coachella separate. However, after Van Santen died in December 2003 from flu-related complications at the age of 41, he sold half of the festival, along with the controlling interest, to the company in 2004. That year, with Radiohead and The Cure as headliners, was their first sellout.

“For me that was a turning point,” Tollett told the L.A. Times earlier this year. “Once Radiohead gave you the stamp of approval, you’ve arrived. Every band started to call at that point.”

The rest, as they say, is history. Headliners now command several millions of dollars for playing one of the festival’s three nights—the festival was extended to include three nights in 2007 and a second, separately-ticketed weekend in 2012—tickets routinely sell out within minutes months before even a single act is announced, and the whole thing has become such a scene that the music can oftentimes feel like an afterthought to many attendees who seem to be merely doing it for the gram.

But for one shining moment 20 years ago, Coachella was an idealistic place where lovers of music could come together to see the acts who don’t command the airwaves or sell out arenas. It wouldn’t last. After all, how could it? But it happened. And while its legacy has ultimately become something much different, it’s just nice to remember its humble beginnings.

END_OF_DOCUMENT_TOKEN_TO_BE_REPLACED

END_OF_DOCUMENT_TOKEN_TO_BE_REPLACED
We and our partners use cookies on this site to improve our service, perform analytics, personalize advertising, measure advertising performance, and remember website preferences.Ok