An unlikely friendship? Ed Sheeran is giving us a glimpse into his relationship with Courteney Cox. On the June 28 episode of “The Late Late Show with James Corden,” the British musician revealed that when he first visited Los Angeles in 2013 a mutual friend brought him to Cox’s home — and now, whenever he’s in town, he stays with her.

“They took me to Courteney Cox’s house… and when I was there, she loves musicians jamming all the time so, I picked up the guitar and played some songs and she was like, ‘Anytime you want to stay, let me know,'” Sheeran shared of the “Friends” star. “And then literally every single time I’ve been back to Los Angeles since then, I’ve stayed there.”

Playing matchmaker, Sheeran revealed that he is the one responsible for introducing Cox to her partner, “Snow Patrol” musician Johnny McDaid, who is also the godfather to Sheeran’s daughter Lyra. “I introduced her to my best mate Johnny, who I wrote ‘Shape of You’ and ‘Bad Habits’ with,” the “Photograph” singer shared, per The Mirror. “She invited me round her house and I just kept going… and one day I brought Johnny and he didn’t come home.”

Recently, fans saw Cox and Sheeran break the internet with their recreation of “The Routine” dance scene of “Friends.” Now, fans won’t believe the prank the Grammy winner is getting away with. 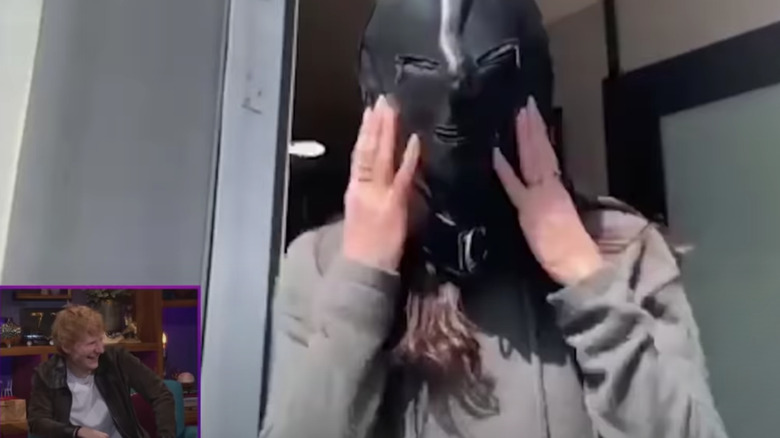 Ed Sheeran may be the worst houseguest Courteney Cox ever has. The “Afterglow” singer recently shared with James Corden an ongoing prank he’s been pulling on the actor

“She has this Alexa thing in her house and she goes, ‘Oh this is wonderful, this is my Alexa. I can just order whatever on this,” Sheeran explained. ” … Do you know what a gimp mask is? You know, like, an S&M leather gimp mask. So she walks out of the room and I go, ‘Alexa, order me a gimp mask.’ And it goes, ‘Okay, Courteney!'”

Things took a turn when Cox’s assistant opened the package and left the naughty item on her bed. “She instantly goes, ‘I don’t think I was meant to see that,'” he began. ” … Courteney comes up and goes, ‘Where did this come from?’ She found out the story, and now every time I go back there I order another gimp mask,” he laughed. “She has maybe 12. I hide them in people’s bedrooms.” The singer went even further than that. “She had two people come and look at her piano to try and buy it ― two absolute strangers going into her house that I found out about. So I left a couple of masks on the piano.”

In a funny video for Sheeran, Cox put on the gift and joked that she used it as a protective face mask against COVID-19.