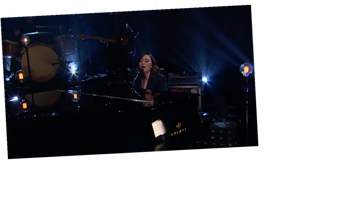 Sara Bareilles appeared on The Late Late Show to perform her recent emotional song “Saint Honesty.” The musician, who sang and played piano during the appearance, was joined by her band and three back-up singers for an intimate performance.

The introspective number, which was produced by T Bone Burnett, comes off Bareilles’ recent album Amidst the Chaos, which dropped in April. Earlier this year the musician performed the song on Saturday Night Live, along with her smoldering power ballad “Fire.”

Amidst the Chaos marks Bareilles’ fifth studio album. The record is a follow-up to Bareilles’ 2013 LP The Blessed Unrest. In the time since her last release, she penned the score to Waitress and also made her Broadway debut starring as the lead in the musical. For her performance, she earned a Tony nomination for Best Original Score. Last year, Bareilles won an Emmy for her performance as Mary Magdalene in Jesus Christ Superstar in Concert.

Bareilles is currently on tour in support of her new album, with the U.S. trek wrapping November 26th in Atlanta.

END_OF_DOCUMENT_TOKEN_TO_BE_REPLACED

END_OF_DOCUMENT_TOKEN_TO_BE_REPLACED
We and our partners use cookies on this site to improve our service, perform analytics, personalize advertising, measure advertising performance, and remember website preferences.Ok