Megan Thee Stallion took home several wins at the BET Awards on June 27, 2021 after receiving seven nominations (via RTE). She proudly accepted awards for Best Female Hip Hop Artist, Video of the Year and Best Collaboration with Cardi B for “WAP,” and the Viewer’s Choice Award for her remix of “Savage” featuring Beyoncé. At the annual ceremony, which celebrates Black performers in the areas of entertainment and sports, Megan stood up in front of the audience and gave a moving speech to express her gratitude for the recognition of her achievements.

According to Entertainment Tonight, Megan became emotional as she thanked her late mother, Holly Thomas, for the support she gave when she was alive. “I think highly of all the women nominated in this category. Everybody knows I am a girl’s girl, and I just want to say, thank you mama,” she said. “Thank you mama for even putting it in me to want to be a female rapper and putting the work ethic inside of me and the drive and the push. She can’t be here with me today, but I still think about her everyday and she is the reason why I keep going.”

While the “Hot Girl Summer” artist’s acceptance speech moved viewers, the real reason people couldn’t stop talking about her after the BET Awards came earlier in the evening. Keep reading to find out why fans blew up social media platforms with praise for the rapper.

Megan Thee Stallion is a force to be reckoned with 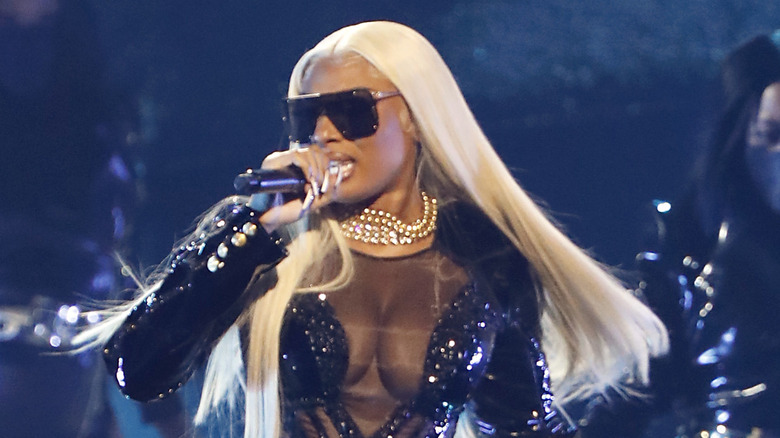 Megan Thee Stallion lit up the stage at the Microsoft Theater in Los Angeles for her performance of “Thot S**t” during the BET Awards (via Entertainment Tonight). She appeared onstage in an outfit that made jaws drop throughout the theater, including a black veil and leather jacket that she tossed to the side as she launched into her iconic track. She added a long, flowing blonde wig; dark sunglasses; and plenty of bling to complete the look.

Twitter users took to the popular social media site to express their love for the artist and shower her with praise for her incredible performance. One Twitter user posted, “we can all agree that megan had the best performance #BETAwards,” alongside a clip of Megan dancing in a pair of knee-high, shiny leather boots. Other users responded to the post, writing, “Without a doubt!!” and “Killed it.” Another social media user posted, “MEGAN ATE THAT PERFORMANCE AND THAT DRESS PURR #BETAwards.”

The 26-year-old rapper gave fans another reason to talk about her when she strutted onto the BET Awards red carpet with her boyfriend, Pardison Fontaine. Viewers were thrilled to see the adorable couple together after they made their debut at the 2021 iHeartRadio Music Awards last month (per ET). Megan flaunted her curves in a long, white dress with slits up both sides to her chest while the hip-hop artist complemented his girlfriend in an all-black outfit, dark shades, and a pair of white kicks.