A stellar cast heads into the hour-long program’s 17th season.

Some of these characters have been on hand since the beginning of the show’s run, while others have joined along the way, making their faces known to diehard fans who have never stopped watching.

For those viewers who seek an easy way to get acquainted or reacquainted with the actors and their Grey’s Anatomy counterparts, the following is a convenient primer that does just that. 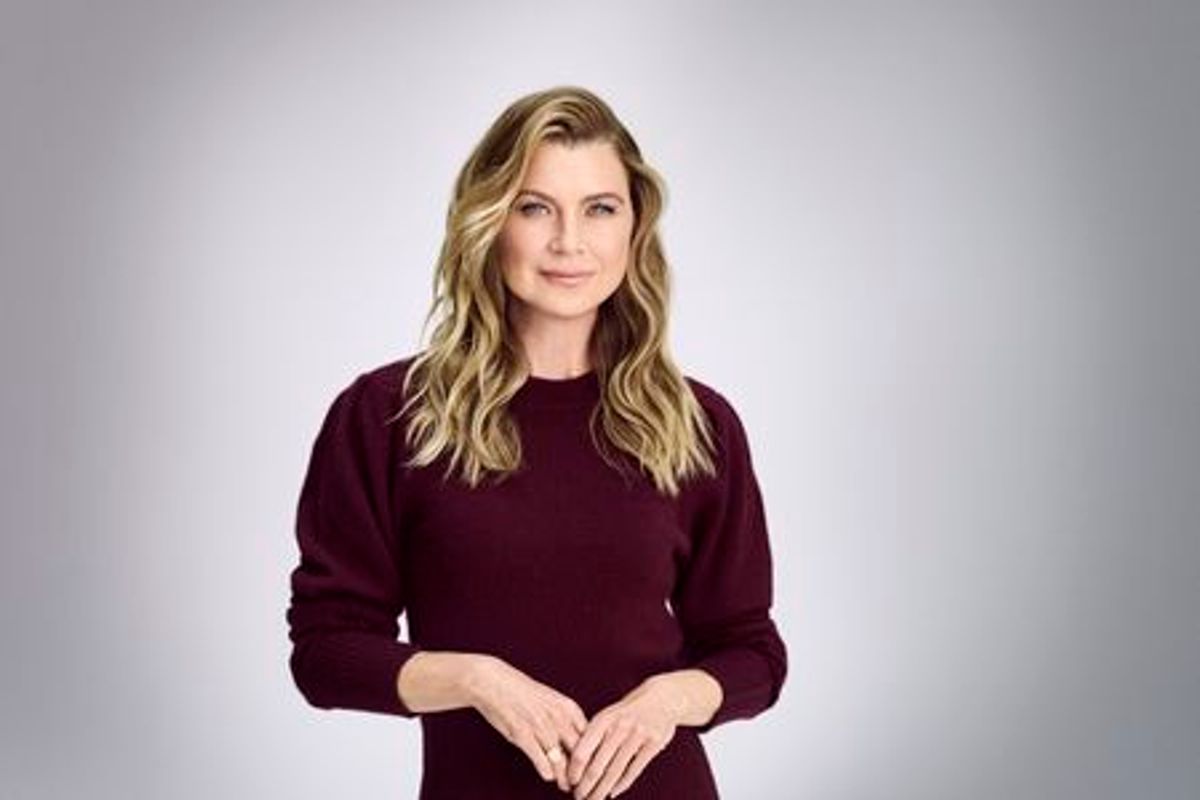 Dr. Meredith Grey is the character on which Grey’s Anatomy’s story is based.

In the series, Mer followed in her mother’s footsteps as a prominent surgeon who commands respect as she does the kind of work others in her field seek to emulate.

Ellen Pompeo has played this amazing doctor since day one of Grey’s Anatomy.

In 2007, the 51-year-0ld actress received a Golden Globe nomination for Best Performance by an Actress in a Television Series – Drama at the Golden Globe Awards for Grey’s Anatomy performance.

That same year, she and her co-stars won the Screen Actors Guild Award for Outstanding Performance by an Ensemble in a Television Drama.

Beyond her work on Grey’s Anatomy, Ellen is extremely active in her production company called Calamity Jane, which develops ABC dramas. 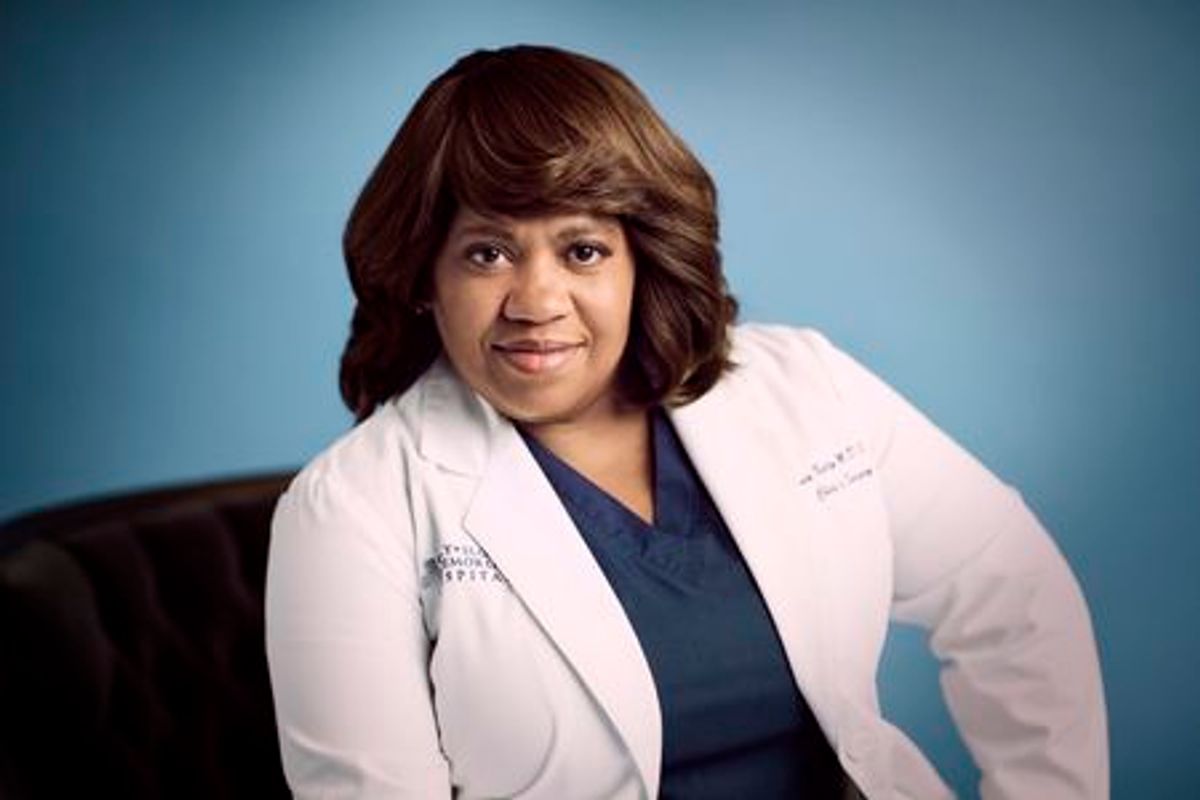 This acclaimed Houston-born actress has also been on Grey’s Anatomy since the hit show bowed on ABC in 2005.

As a general surgeon, Miranda worked her way up the chain of command until she made it to the top as the Chief of Grey Sloan Memorial Hospital.

As a seasoned thespian, Chandra began her career in Texas when she was only five years old.

Starting early in show business has served her well as this veteran performer has won a Screen Actors Guild Award, a People’s Choice award, a Prism award, and three NAACP Image Awards — all for her work on Grey’s Anatomy.

Chandra also boasts a long line of Broadway credits, including one for her stint in Chicago as Matron Mama Morton. 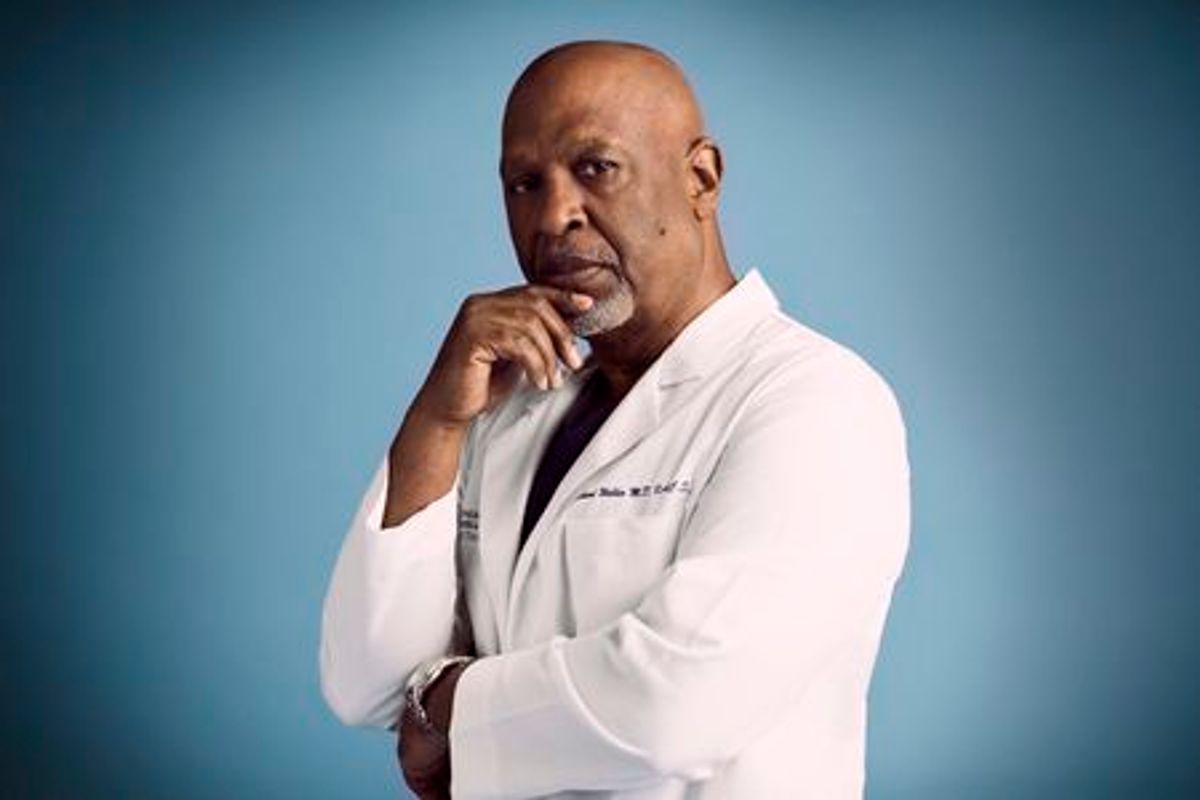 Dr. Richard Webber is one of the most beloved characters on Grey’s Anatomy, both in his job as Chief of Grey Sloan Memorial and as a recovering alcoholic who often helps others who suffer this disease, too.

In real life, James Pickens is well established as a career actor.

He began his storied career at Cleveland’s Karamu House, the oldest African-American theater in the U.S.

Among his many credits outside the theater, James has worked with a host of renowned Hollywood directors.

He also appeared in Sleepers, Sphere, Jimmy Hollywood, and Liberty Heights, all films which were helmed by Barry Levinson. 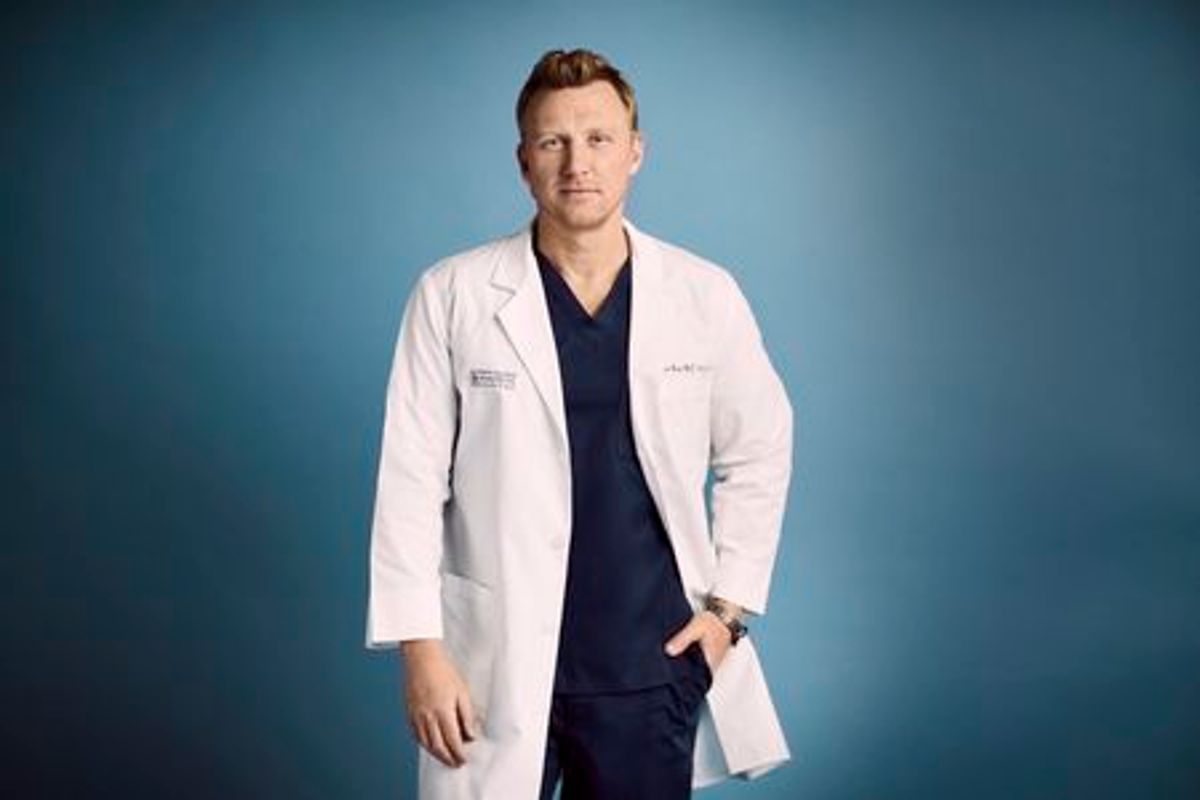 Although Owen Hunt speaks with a natural American accent, Kevin McKidd originally hails from Scotland, so he probably sounds more like his native family than he does like his Grey Sloan buddies.

Starting in 1996 as the star of Small Faces, Kevin was also featured in the film Trainspotting.

On the small screen, Kevin played a soldier in HBO’s Rome, and he became a time-traveler/journalist in NBC’s Journeyman. 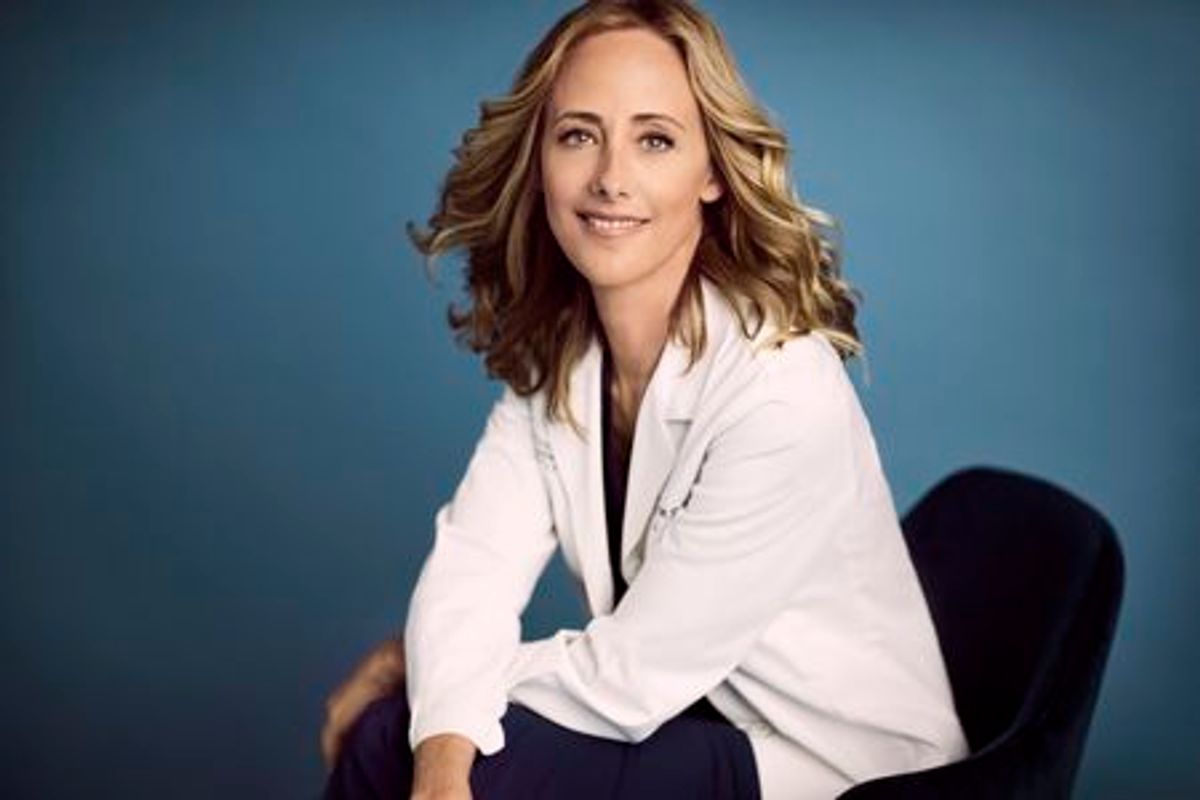 As Teddy Altman, Kim Raver plays the former cardiothoracic surgery head, the feisty center of one of the lustiest love triangles on Grey’s Anatomy.

However, in her real life, the 51-year-old seems to be at least a tad less provocative.

However, this huge talent is a popular choice for casting agents looking for actors to play physicians. Indeed, Kim maintains a recurring role on Season 5 of Showtime’s Ray Donovan as a surgeon named Dr. Bergstein.

She has also been held in high esteem when she played Nico Reilly on the NBC series Lipstick Jungle. 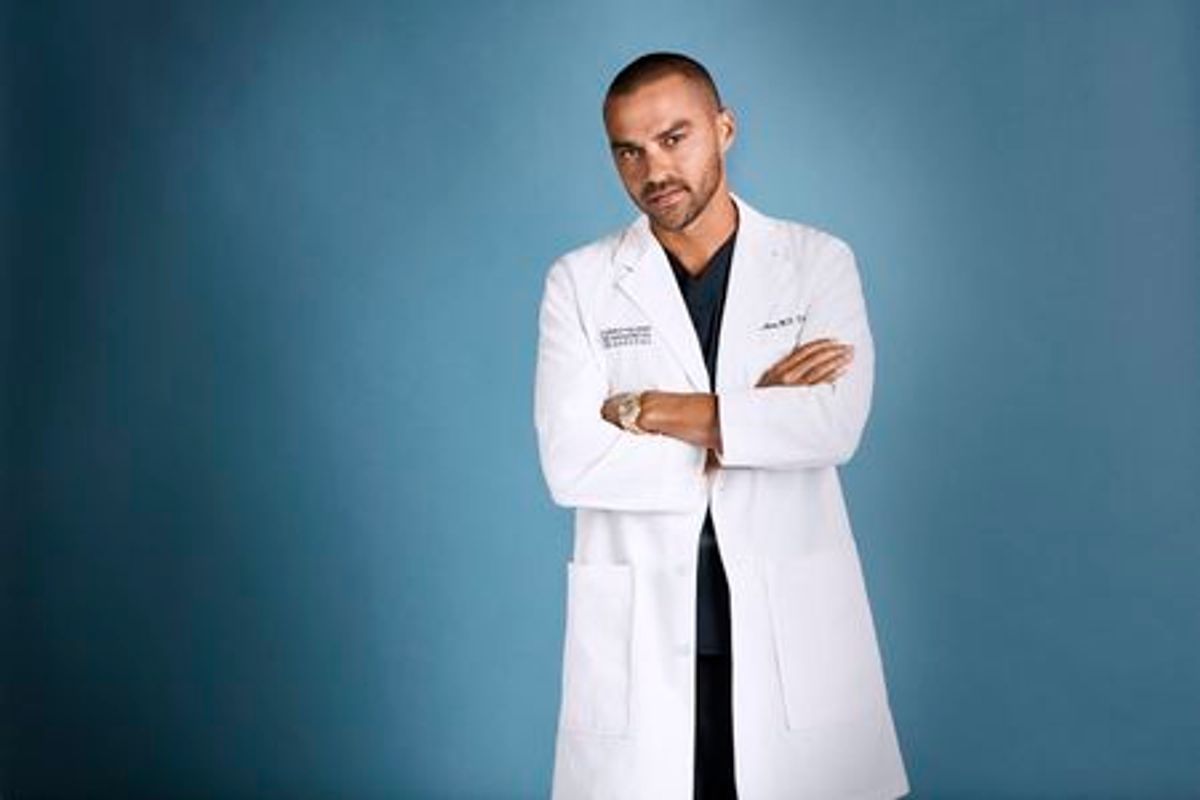 The inimitable Jackson Avery might be a doctor who started life as a member of an overtly privileged family, but the person who plays this plastic surgeon is anything but a spoiled brat.

Along with all of his other pursuits as a thespian, he appeared in several films. Among the most prominent was Lee Daniels’ The Butler, The Cabin in the Woods, Band Aid, and Jacob’s Ladder. 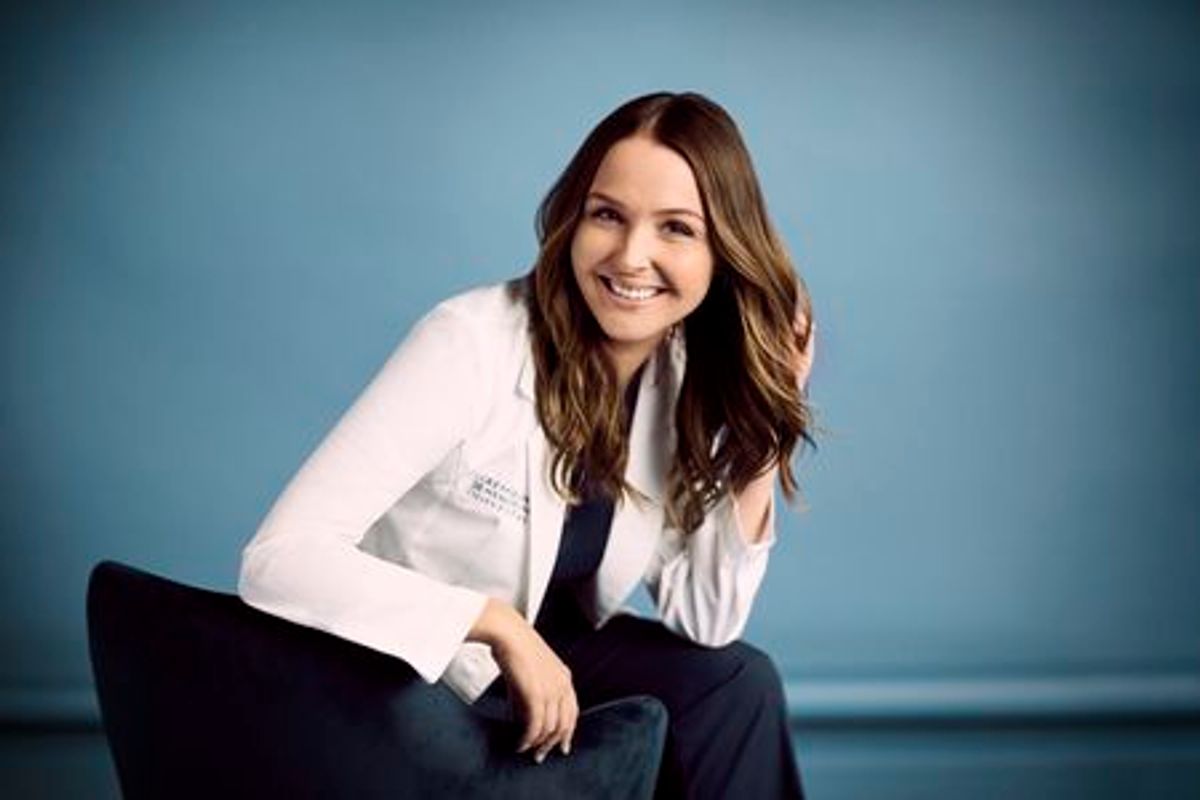 British beauty Camila Luddington has been through a lot of strife in her role as Dr. Jo Wilson.

She’s navigated the horrors of the foster system, lived in a car, been married to an evil man, remarried a fellow surgeon, and lost the later love to his former wife, Izzy — who was once a regular on Grey’s Anatomy.

Camila is nothing like her character, including her native accent, which is much more English than American.

Her voice has been heard in many artistic venues, including the sci-fi/fantasy as Lara Croft in the Tomb Raider video game.

Meanwhile, she also used her most posh English accent as Kate Middleton in the Lifetime movie, William & Kate. 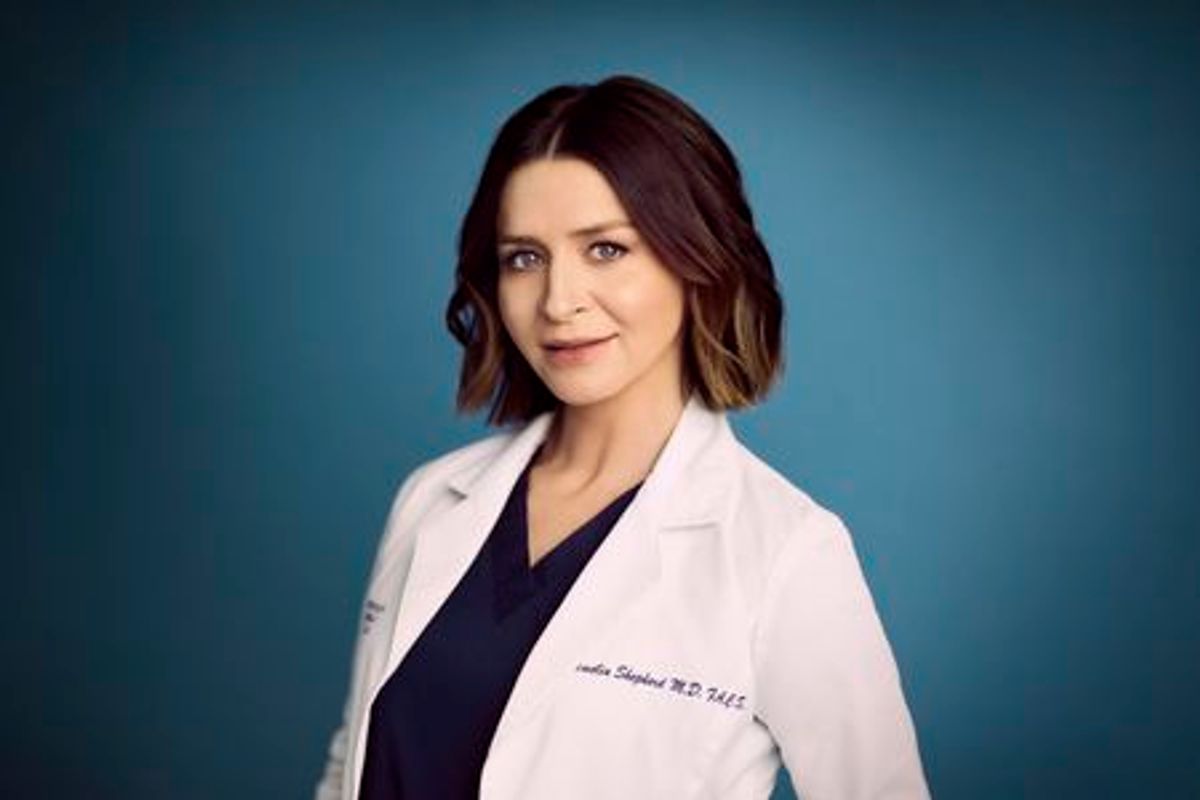 Previously, she appeared on Private Practice in the same role as Dr. McDreamy Derek Shepherd’s little sister and a prominent though troubled surgeon practicing in Los Angeles.

Meanwhile, Caterina Scorsone is a gifted performer cast in the movie Strike along with Kirsten Dunst, Rachael Leigh Cook, and Merritt Wever.

She was the lead actress in Missing, and she also appeared with Dennis Hopper in Starz’s first original program, Crash. 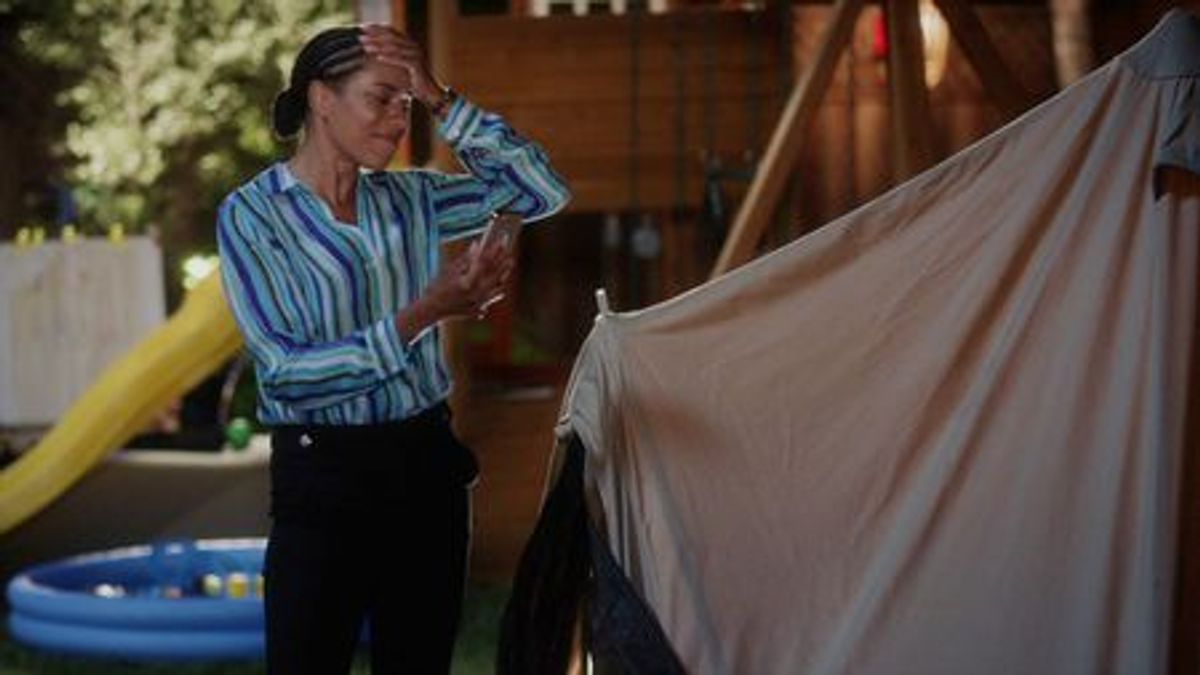 While working as a cardiothoracic surgeon, she became aware that her biological father, Dr. Richard Webber, worked in the same hospital. How’s that for synchronicity?

In real life, Kelly McCreary has become a Hollywood mainstay. She has appeared on many television shows, including Scandal, Castle, and Emily Owens, M.D.

On the big screen, this multi-talented performer starred as Eartha Kitt in Life. Robert Pattinson and Dane DeHaan were her co-stars in the indie film.

Also to her credit, Kelly has made several stage appearances, including a turn in Broadway’s Passing Strange. 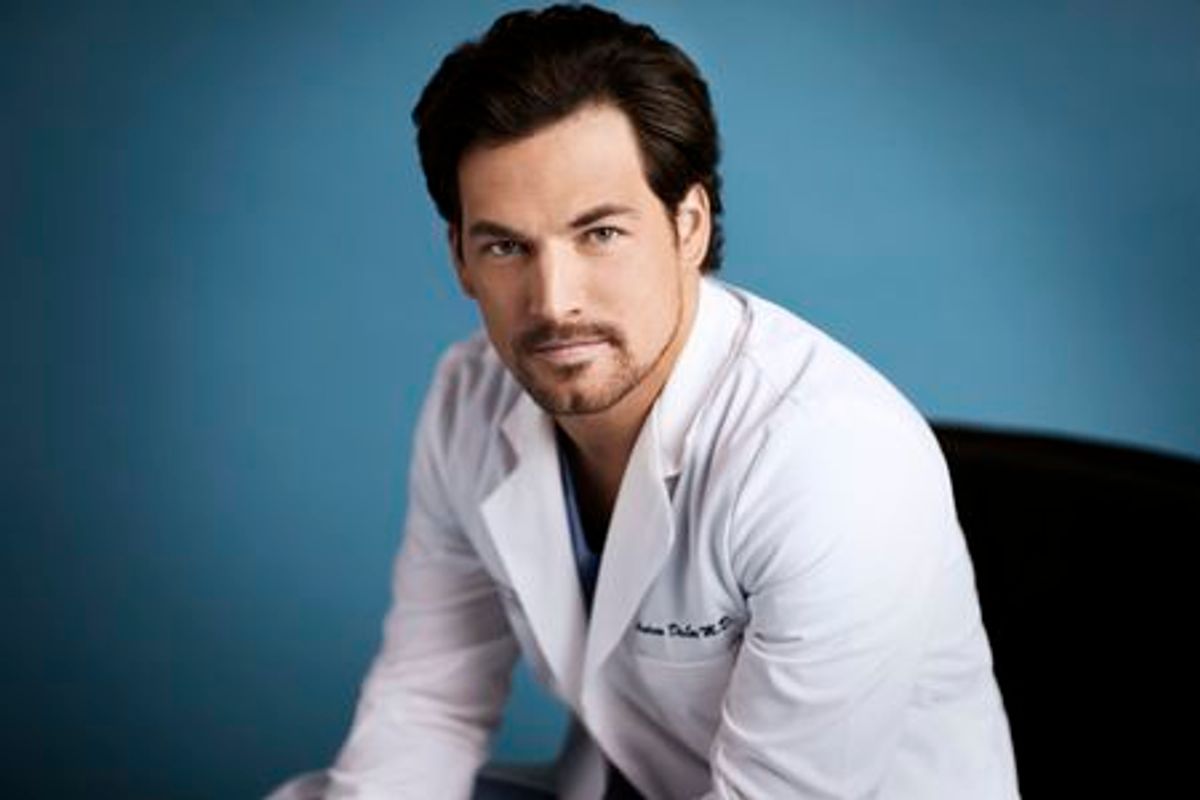 Roman-born, Canadian-bred Giacoma Gianniotti is bilingual, and so is his Grey’s Anatomy character Andrew DeLuca. Talk about a handy qualification to have for both parts.

Meanwhile, Giacoma has a host of other credits to his name.

He was cast in the Jesse Owens biopic Race with Jason Sudekis, Jeremy Irons, and William Hurt, and he garnered a recurrent role on ABC’s Selfie.

The handsome European was also featured on the Lifetime miniseries The Secret Life of Marilyn Monroe. 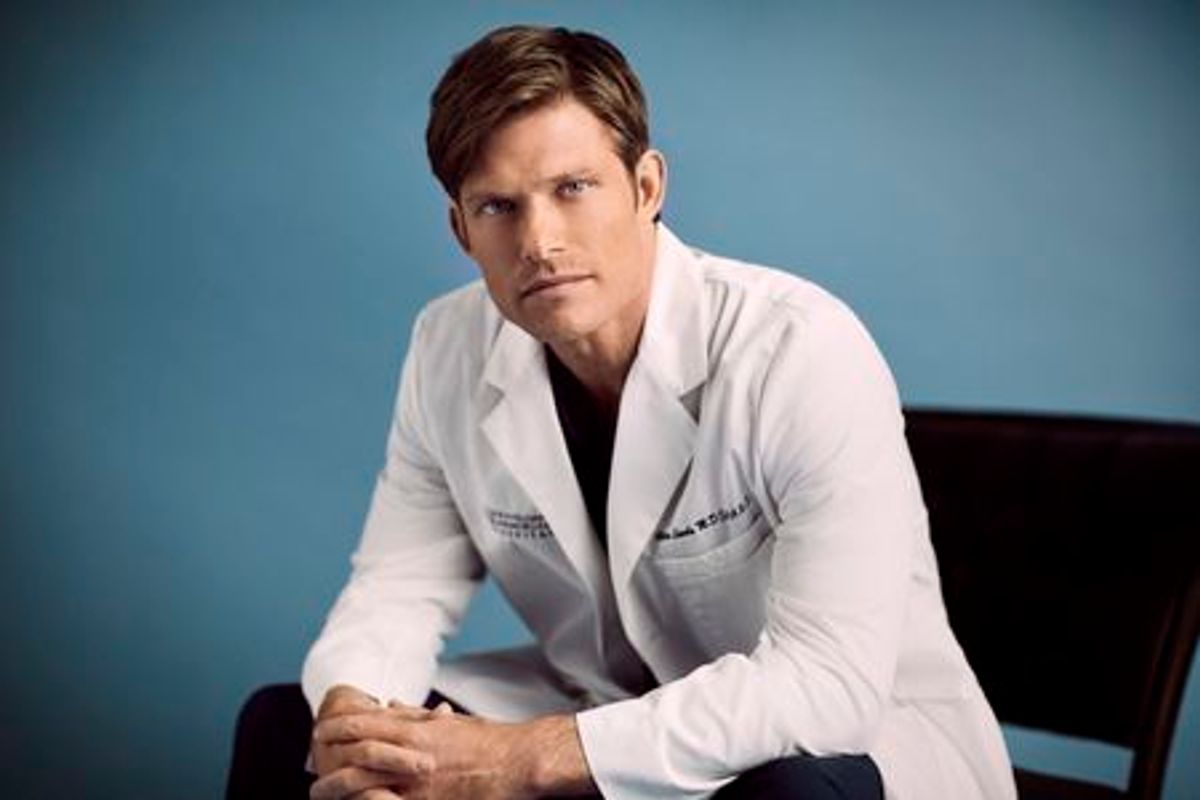 Although Chris Cormack has recently become known as the hunky Link Lincoln, an orthopedic surgeon on Grey’s Anatomy, he was formerly cast as a Nashville country singer.

The multi-talented performer has also shown in many other television dramas.

He could be seen on NCIS, CSI: NY, Desperate Housewives, Smallville, The O.C., and CSI: Miami. 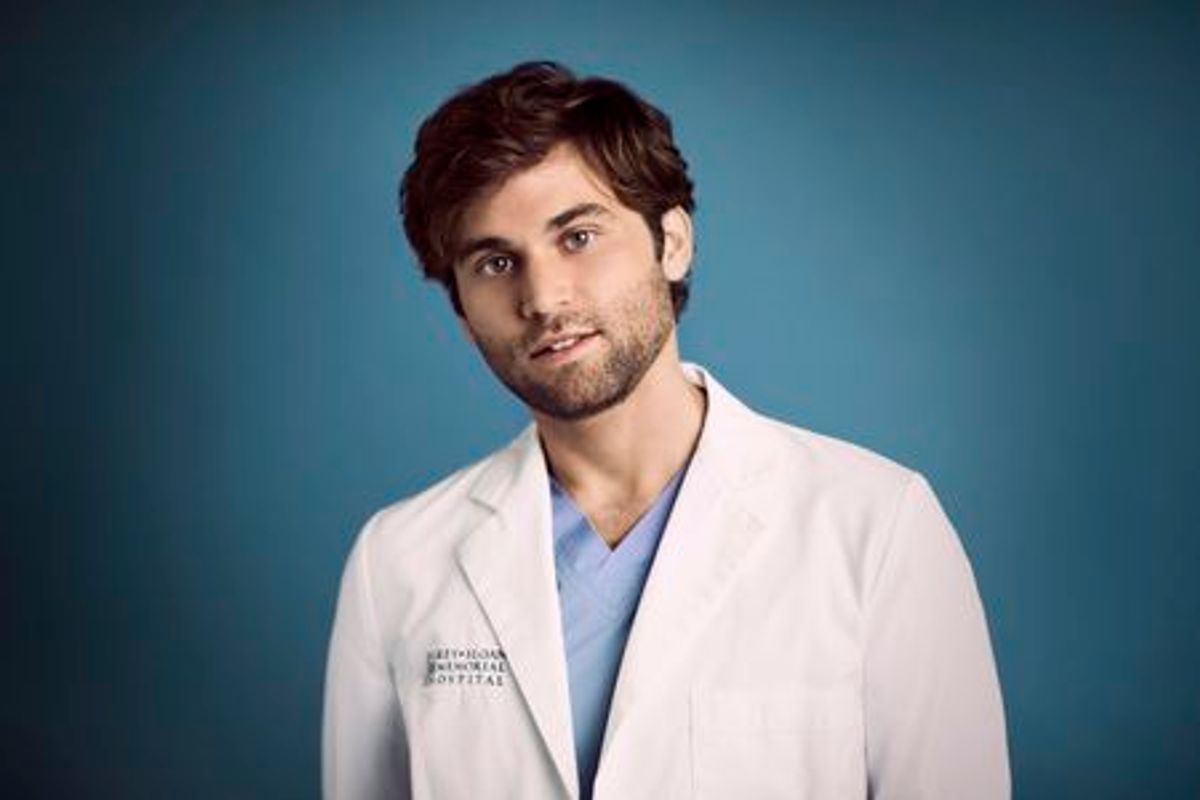 The Grey’s Anatomy character everyone calls Glasses — even though he often wears contacts — is still learning his way around Grey Sloan Hospital after starting there as an innocent intern during season 15.

Jake Boreilla became a bona fide actor at the age of 10 when he took to the boards of the Cleveland Children’s Theater.

Since then, Jake has appeared in two Nickelodeon shows. He played in iCarly as Roy and in The Thundermans as Wolfgang. 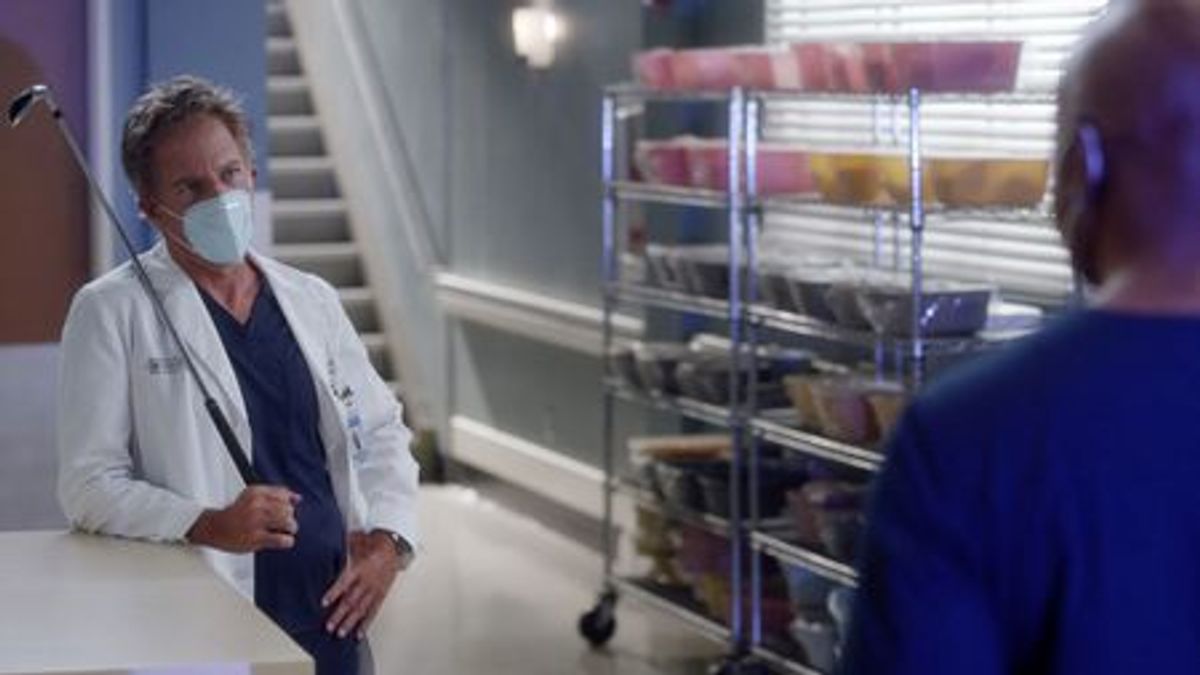 Tom Koracick likes to behave like a total narcissist even though this character is really a softie who is insecure.

No doubt Greg Germann, who plays Tom, is super stable as an actor, having been in show business for a long time.

Remember the Houston-born thespian when he played a shark on Ally McBeal?

That part took a lot of gumption, as did his turn as Hades, Lord of the Underworld, on Once Upon A Time, an ABC production.

Grey’s Anatomy airs on Thursdays at 9/8c on ABC.