2023 Oscars: How Avatar: The Way of Water Could Make a Big Splash in the Craft Races

Underestimate James Cameron at your own peril — he feeds off it, as witnessed by “Aliens,” “Terminator 2: Judgment Day,” “Titanic,” “Avatar,” and now “Avatar: The Way of Water.” True to his promise, the master showman has delivered the cinematic goods beyond expectation with the sequel, topping the original in epic storytelling and high-tech spectacle.

This time Cameron expands the universe of Pandora by going underwater for splendor and adventure with the introduction of the Metkayina reef clan. In this regard, Cameron has truly become the heir apparent to his idol, Jacques Cousteau, and has outdone himself with innovation, thanks to the VFX wizards of Wētā FX and his other crafts teams. Once again, Cameron has proven that 3D isn’t dead, and has given us a reason to return to theaters this holiday season.

As far as the Oscars, “The Way of Water” could potentially equal its predecessor in nominations. “Avatar” earned seven noms for art direction (now production design), cinematography, visual effects, editing, original score, sound editing, and sound mixing, taking home awards in the first three categories. Since sound has merged into a single category, “The Way of Water” would need either costume design or original song (for the end credits track “Nothing Is Lost (You Give Me Strength)”) to make up the difference — or both to exceed “Avatar.”

Considering what a virtual production game changer “Avatar” was 13 years ago, it’s a shoo-in again to win the VFX Oscar for upping its photorealism while introducing breakthrough underwater performance capture. However, with new tech also impacting production design, costume design, and cinematography, it will be a formidable contender in these categories as well, along with the immersive, Atmos-driven sound design that encompasses every underwater sonic element. Read on for an in-depth look at these and other “Way of Water” crafts, with exclusive behind-the-scenes insights.

It was important that Pandora display the diversity of Earth, rather than being a one-note jungle planet. Led by LAFCA winners Dylan Cole and Ben Procter (concept designers on “Avatar”), the production design team wanted the oceans to be preeminent and the islands to be exotic and contain different plants and trees we’ve never seen, especially the large mangrove trees that support the intricately woven village of the Metkayina clan in its roots. These reef people themselves are water-adapted with stronger, wider tails, strakes on their arms and legs, and nictitating membranes on their eyes to see underwater.

Cameron further develops the first film’s theme of spirituality and being one with the environment, and connectivity spills over into the design, from the tensile walkways uniting the Metkayina village suspended over the water, to the fractal-inspired macro coral connecting and nourishing life in the sea. The art department had to populate an entire ocean, from the sea floor up, from many species of coral and water plants (many bioluminescent) to dozens of fish designs, covering bait fish to apex predators, among others. It was important to have alien and new designs, but still familiar enough to be relatable. Three creature standouts are the intelligent, whale-like tulkun, the plesiosaur-inspired ilu (similar to the Na’vi direhorse), and the skimwing giant flying fish (reminiscent of the dragon-like, aerial banshee).

To operate in this new, watery world, the humans’ Resources Development Administration tech had to adapt as well — an entire family of watercraft was developed to dominate the sea both above and below water. Sporting such names as Mako and Crabsuit, these new machines were shaped by the same hydrodynamic forces and aquatic realities that evolved Pandora’s sea life.

Cinematographer Russell Carpenter (Oscar-nominated for “Titanic”) supervised both the live-action shoot and the virtual lighting (which took a year of prep). This enabled him to become completely familiar with the visual language and lighting aesthetics of the nuanced world of Pandora, as well as the human-made and brutally stark light of the RDA base.

When live-action shooting began in New Zealand, the goal of “embedding” human characters into virtual landscapes required painstaking attention to detail. Merging live characters with their virtual counterparts meant that nothing in Carpenter’s lighting could be out of place or out of sync. The lighting team built a system of moving lights, which could be operated remotely, allowing them to make extremely precise strikes of light exactly where they should be. Carpenter relied on the sophisticated real-time camera/compositing system called Simul-Cam (developed for “Avatar”) to double-check the work and make sure the live and virtual worlds were brought together as one. 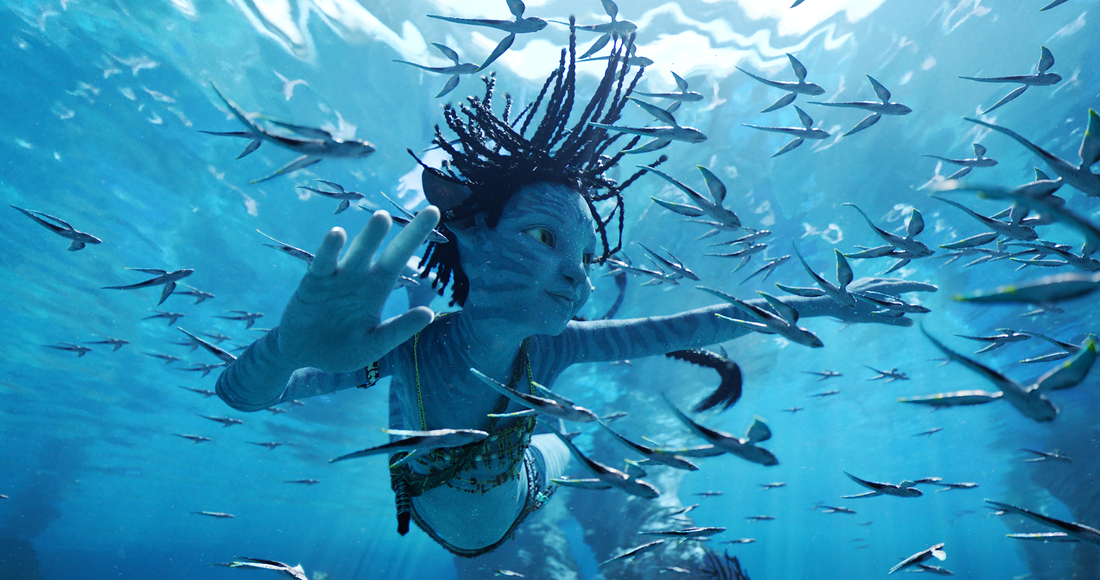 Led by Oscar-winning senior VFX supervisor Joe Letteri (“Avatar,” “King Kong,” “The Lord of the Rings: The Two Towers,” and “The Lord of the Rings: The Return of the King”) and Wētā FX producer Lena Scanlan, the VFX team expanded its traditional workflow solutions to not only be reliable and repeatable for scale, but also tightly integrated to match the water-based performance capture and live action. Tracking underwater was done using LED markers and scans of each set before it was dropped into the pool. Using multiple stereo Basler cameras and tech from depth compositing, they were able to generate a geometric mesh for the waves and live-action elements. The geometry was then used in Houdini to help drive the CG simulations and allow natural handoffs from live action to simulated water.

The studio also rebuilt its entire simulation approach to enable a new level of realism and interaction, using a global simulation methodology that included hair, cloth, skin, and hard surface simulations that were all self-referencing and evolving together. Additionally, all character performances featured a new muscle-based facial system. 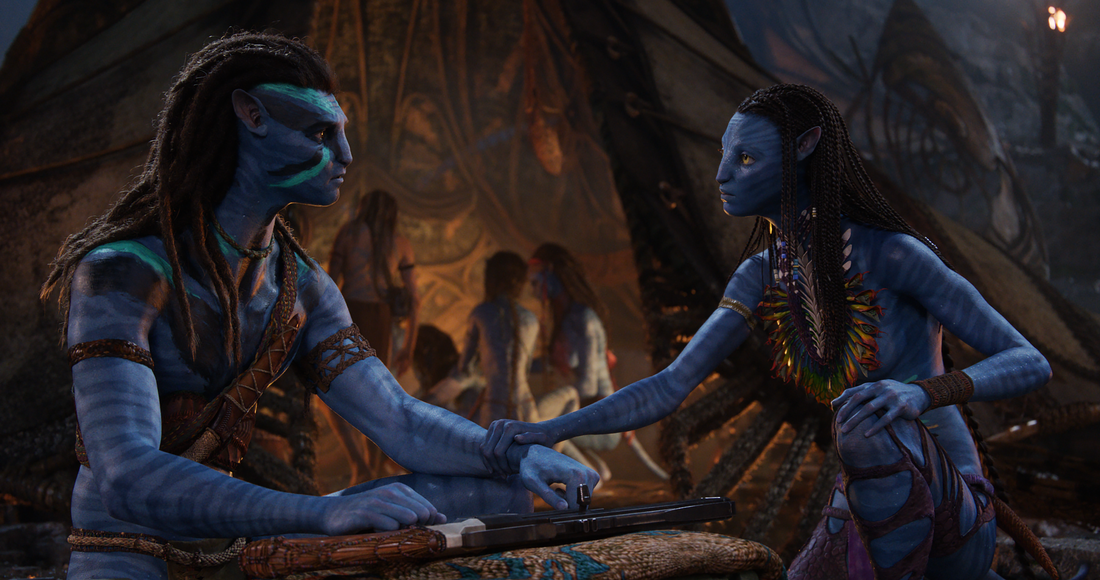 Covering a span of five years, Scott and her team weaved, stitched, beaded, embroidered, and braided; and then blended it with the tech innovations which led to the creation of a unique, rich culture inspired by the indigenous craft techniques of Oceania. With an emphasis on clan, character, and family, thousands of bespoke costume and prop pieces were made, turning fantasy into material reality, in addition to creating live-action costumes, in order to create this new advancement in hybrid costuming.

At the core of the “Way of Water” script was a musical idea that ran throughout the film tied to the theme of water. The sea as a musical idea became the first piece of music written by composer Simon Franglen (who collaborated with the late composer James Horner on the “Avatar” and “Titanic” scores) in late 2017, and became the thrust of the three-hour score (recorded on three continents).

New characters and environments (primarily the Metkayina and their village) needed their own themes and textures, and the sea was a source of many of these, with the scintillation of light, the ebb and flow of waves, the connection of the Na’vi with water, even harmonic resonances of animal calls were all inspirations. There’s a rhythmic and vocal backbone to the music, and Franglen brought in musical specialists from around the world, including Pacific Island singers. A new planet needs new instruments, so the composer also designed them; then the art department and the props team 3D printed them. The scale of the music mixes often exceeded 1,000 tracks, and the film features a 100-piece orchestra recorded at The Newman Stage at 20th Century Studios. 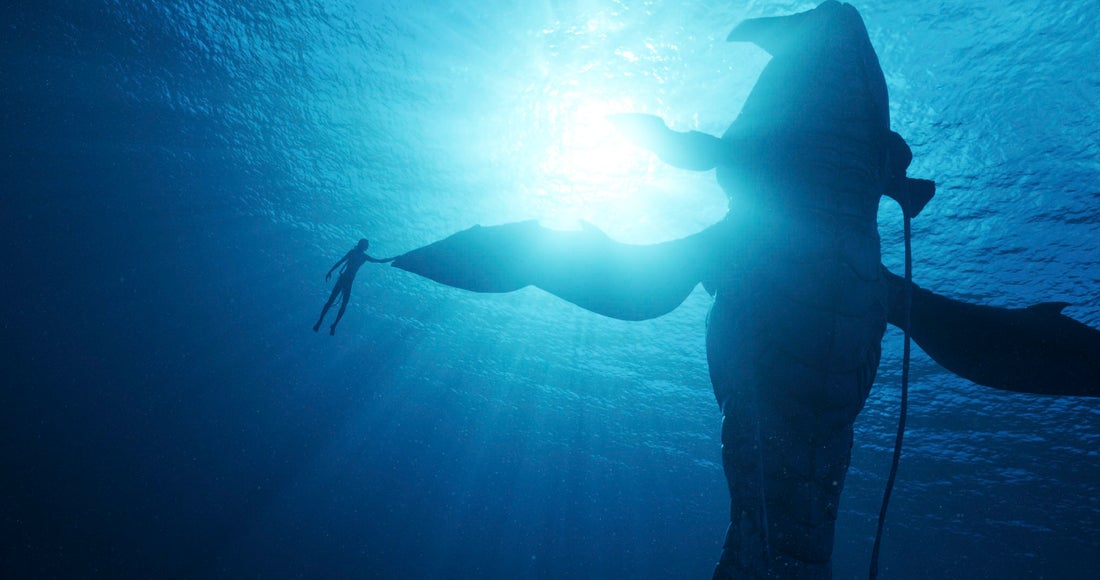 Franglen also contributed two songs: “The Songcord,” sung onscreen by Neytiri (Zoe Saldaña), which refers to the core concept of Na’vi celebrating the lives of their family, and the end title song, “Nothing Is Lost (You Give Me Strength),” co-written and sung by The Weeknd, about fighting for a family’s survival. According to the composer, Cameron described the Songcord on the first page of the script. It refers to telling the story of the Na’vi family or clan ancestry through song, accompanied by a device with beads strung together on twine or thread. The director suggested to Franglen that the song needed an ancient haunting quality with the warmth of a mother’s love. To ground it, Franglen wrote the lyrics in Na’vi, and it was performed live on the sound stage by Saldaña in front of 100 crew members.

In discussing the end title song, Cameron wanted it to be hopeful and about fighting for the survival of family. Franglen recommended Abel “The Weeknd” Tesfaye, who responded enthusiastically. The composer sent him thematic and lyrical concepts. Musically, Franglen wanted it to bridge the world of “Avatar” and The Weeknd. The dance trio Swedish House Mafia collaborated with Franglen on the music and production to blend their distinctive pop sensibility with the film’s musical world, the Na’vi voices, tribal drums, and the orchestra. The Weeknd record the final vocals in LA, and the composer added the orchestra at The Newman Stage during their final scoring sessions. Although “Nothing Is Lost (You Give Me Strength)” grows out of the score, it is very much a Weeknd song. 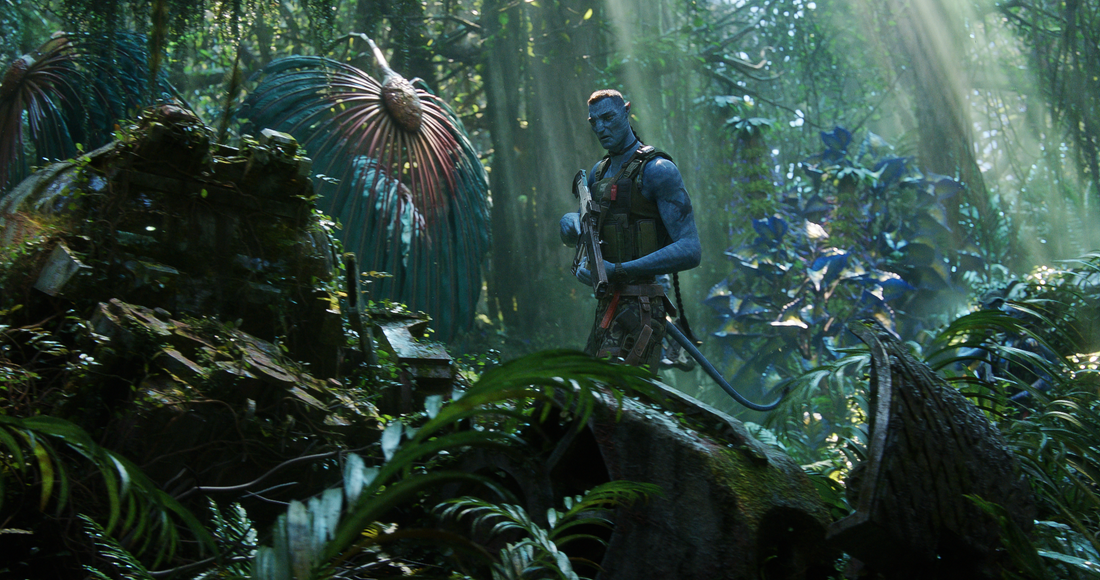 The returning sound team (led by supervising sound editor/re-recording mixer Christopher Boyes and supervising sound editor Gwendolyn Yates Whittle) not only sonically envelops us in the familiar forests of Pandora but also splashes us head first into the aquatic world of the Metkayina. New characters and creatures expand the Sully family saga as they migrate to the oceanic reef, where every inhale, creature bellow, wave crash, and timpani roll is strategically placed and mixed for maximum emotional, immersive impact.

The returning team of editors (Cameron, Stephen Rivkin, and John Refoua, plus David Brenner) were presented with new challenges. As before, the actors’ performances were captured and “performance edits” of the scenes were created in preparation for virtual cameras. Based on the selected performances, virtual cameras created the actual shots for each scene. These shots were then edited into final cuts of each scene and then turned over to Wētā.

That’s where the similarities ended. “The Way of Water” called for a lot more scenes combining live and virtual character integration. This created an extra step of capturing CG placeholders for the live-action characters. These performances needed virtual cameras to be shot and edited — and that became a blueprint for live-action photography. Also, the addition of many more principal characters meant more “performance edits” and more “coverage” during virtual cameras. Plus, there was the underwater performance capture, which required its own form of precise pre-editing.