Pundits Alex Scott and Ian Wright were left screaming with excitement over the England Lionesses’ incredible victory against Spain at Euro 2022, with the team clinching the win in an extra-time spectacle.

Last night’s match was a nail-biting affair to say the least, with pre-tournament favourites Spain originally taking the lead in the second-half while vying for a spot in the semi-finals.

After Ella Toone equalised with Spain to make the score 1-1, five minutes into extra time, Georgia Stanway scored an absolute belter, launching the ball from outside the penalty box and sending the England fans at the Amex Stadium into a wild frenzy of celebration.

Alex and Ian – who both played for England and Arsenal during their professional careers – were among them, standing over a balcony as they watched the ball soar into the back of the net with unstoppable force.

In a video shared by Ian, 58, he held onto the balcony as he jumped up and down on the spot, shouting with joy over the goal.

Alex, 37, was right next to him, also gripping onto the ledge while leaning over and yelling, with the pair letting all of their inhibitions loose. 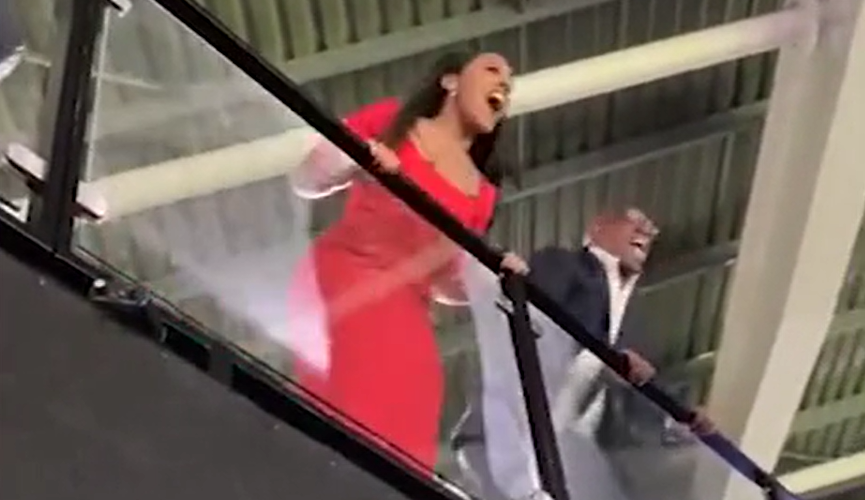 In another video posted on social media by Match of the Day, the duo were captured watching the match tentatively after extra time began, with Alex holding Ian’s arm as she realised the ball was going in.

Ian raised his arms in the air as Alex jumped up and down excitedly, clapping before Ian turned to the camera and they both high fived.

England’s Lionesses will next play in the semi-finals of the competition on Tuesday July 26 at 8pm at Bramall Lane in Sheffield, going up against either Sweden or Belgium, depending on the result of their quarter-final match on Friday.

The final of the tournament is due to take place on Sunday July 31.