‘And Then We Danced’ Review: One of the Best Gay Films In This Year’s Oscar Race Comes From Sweden

Merab is a dancer. Like his mother and father before him, he has trained in the art of traditional Georgian dance since he first began walking. Lean and sinewy, he delicately balances stiffness and flow with each precise move, his eyes alight with the pure joy of creative expression. He’s the paragon of Georgian health, a perfect marriage of the fledgling democracy’s bright future and its proud past. If only his demanding dance coach, who barks that he is “too soft,” could see it that way. If only there were room in Georgian dance — in Georgia itself — for a little softness, maybe the country wouldn’t be losing so many of its artists, scholars, and innovators to more progressive climes.

“And Then We Danced,” Swedish filmmaker Levan Akin’s luminous tour de force (and his native country’s Oscar submission for Best International Feature Film) adorns itself with the question of cultural identity as proudly as Merab dons his traditional Georgian dance robe in its rousing final scene. Born in Stockholm to Georgian parents from Turkey, Akin chose to set his third feature film in Tblisi, at the intersection of one young man’s arrival at queerness amid his rigorous training in the National Georgian Ensemble. We learn that hyper-masculinity is one of the central tenets of Georgian dance, although it only became so in the last 50 years. By framing his gentle coming-of-age tale around such a traditional piece of Georgian culture, he has made an inherently political film, and rendered it in sensitive terms with a celebratory spirit, not to mention a culture rarely seen onscreen. It’s one of the year’s best gay films.

“And Then We Danced” begins in the studio, with Merab (Levan Gelbakhiani) circling his longtime dance partner Mary (Ana Javakishvili). In the extensive dance scenes, Merab is smooth and joyous, bringing an unmistakable flair to the hard movements. But every time he seems to get into it, all strong shoulders and splayed hips, he’s stopped and made to start again. “Georgian dance is based on masculinity,” his teacher says. “There is no room for weakness in Georgian dance.” 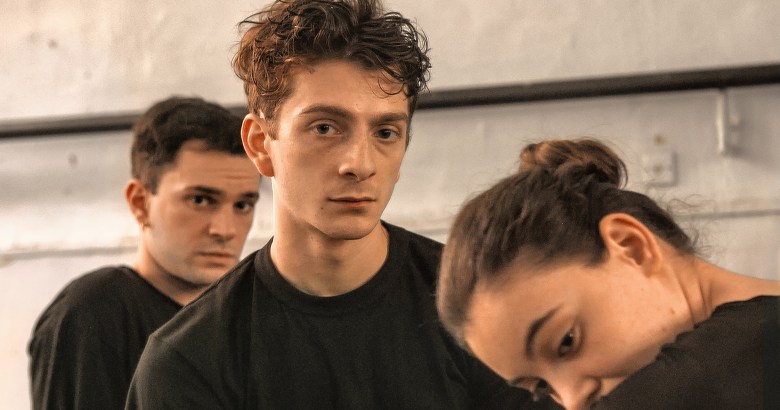 “And Then We Danced”

Merab’s day-to-day is an endless stream of hard work and stress: sweating through rehearsals, waiting tables for too little money, fighting with his drunken brother, and keeping the lights on for their grandmother and unemployed mother. Nevertheless, he can’t help but skip elegantly on his way to catch the bus, as the city’s golden light and colorful clotheslines illuminate his way. When a new male dancer arrives from the country, Merab’s initial suspicions of the competition give way to intrigue. Dark-haired and with broad shoulders, the earring-clad Irakli (Bachi Valishvili) talks back to the teacher and follows his own rules. Though Merab is incensed when Irakli takes his place in a duet, he softens to the newcomer when the two start early morning rehearsals together.

It isn’t long before their desire takes over, once they find each other in the woods during a weekend of partying at a friend’s country home. Drinking homemade wine out of glass carafes and cavorting loudly around the shabby manor, they settle into a unexpected romantic backdrop. Fallen from its former glory, the setting nonetheless exudes a charming grandeur in its peeling paint and windowed parlors. Dancing to Robyn on the moonlit porch, an oversized fur hat atop his head, Merab vibrates with the electricity of first romance. Stealing sideways glances at Irakli in the car ride home, a wide and knowing smile spreads across his face. He’s too happy to notice the other boy doesn’t return his gaze.

The rest is fairly predictable, but Akin fills Merab’s world with enough other intrigue to transcend the cliches of one unrequited gay romance. Merab’s awakening may begin with Irakli, but it doesn’t end with him. When Irakli disappears back home without warning, Merab makes eyes at a swishy young man with long hair. He follows his new friend to a gay bar that wouldn’t be out of place in any other European city, as the loud and flamboyant crew party all night, ignoring the slurs of passersby.

Akin’s script diverges from the traditional coming-of-age tale, even as he hits all the old notes — forcible outing by a jealous classmate, fight scene, the inevitable heartbreak. It’s all there, but the movie remains laser focused on Merab’s internal journey. His forceful final dance audition provides the film’s impassioned finale, as the character finally unshackles himself from the burden of tradition to perform with unbridled style and joy. There may be no room for softness in traditional Georgian dance, but there is always room for interpretation.

“And Then We Danced” premiered at the 2019 Cannes Film Festival and is Sweden’s official Oscar entry for Best International Feature. The film plays NewFest on October 26. Music Box Films will release it in the U.S. at an undetermined date.