‘Aren’t you sticking to ONCE in generation referendum pledge?! Susanna skewers Blackford

Susanna Reid and Alastair Campbell interviewed Ian Blackford MP on Good Morning Britain today about Nicola Sturgeon’s promise for a second Scottish referendum. Reid wanted to know why the Scottish First Minister had made a U-turn after Alex Salmond said the first independence referendum was a ‘once in a generation vote’. Blackford defended the decision his party was making in regards to Scottish independence while Campbell said he felt independence was “played down” in their recent campaign.

Reid began: “Can I just double check, when the SNPs said the 2014 referendum was a ‘once in a generation vote’, why are you not sticking to that pledge?”

“What happened in the election in 2014, there was an Edinburgh agreement, there was nothing in that agreement which said this was a ‘once in a generation, once in a lifetime,’” Blackford replied.

“Crucially, what happened after the referendum, we had a commission which all parties signed up to and in this commission itself, it did not rule out a future referendum.”

Later on, Reid added: “Just to point out, it was Alex Salmond who said ‘it was a once in a generation vote’ you can’t deny that was said at the time of the referendum?” 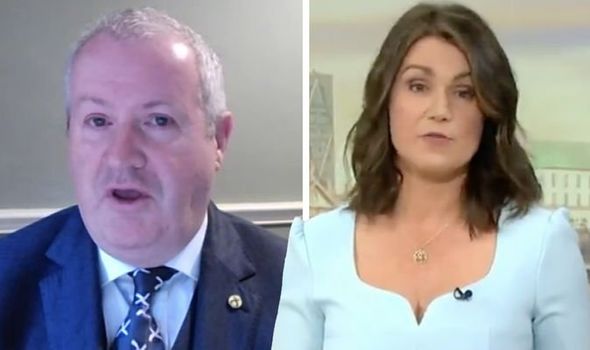 “What I was pointing out was in the agreement which was the legal agreement between two governments, London and Edinburgh,” Blackford commented.

“And, of course, what was contained in the all-party arrangements and nothing would prohibit a future referendum and the point was, the vows that were made in 2014 about more powers about Scotland being a partner in the union, all of that has changed and of course, we have seen the single market act which has taken powers away from the Scottish parliament as well.

“So it’s right in these circumstances.

“And let’s not forget, what happened last week was ourselves and the Greens went to the people of Scotland with a manifesto commitment, that if they voted for us, they were allowing the people to have a say on their future in an independence referendum.

“We just won that election with 72 MSPs in the Scottish parliament, have that commitment to an independence referendum. 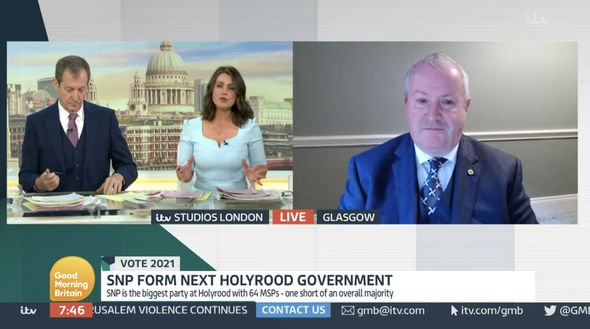 “Incidentally, the same number of SNPs that supported independence prior to the 2014 references, that’s democracy. All I’m saying to Boris Johnson -”

Campbell cut the guest off with: “I watched a debate the other day with Glen Campbell chairing, no relation, and he raised the point that was put to him by someone he knew, he put this to Nicola Sturgeon, this woman had said to him ‘I want Nicola Sturgeon as First Minister, but I don’t want another referendum’.

“And yet, post the election, you are now counting her vote, I presume, as somebody who is saying ‘We must now go and get a second referendum’.

“Would you agree Scotland is still very, very divided and that there has not been the seismic shift that you might need, to one, justify holding the referencing and secondly to win it?” 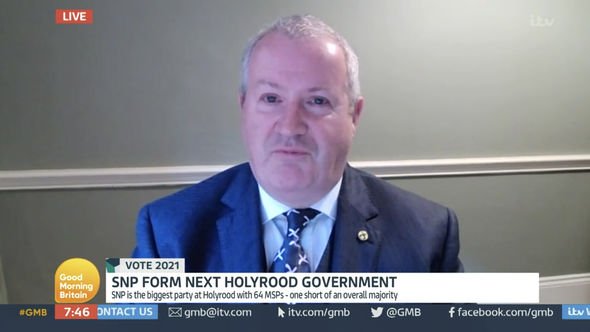 “I think there’s three different things, one is, of course, the First Minister has led with her government, the Scottish through the pandemic,” the MP said. “And a lot of people do support the First Minister and the action she has taken and want to see her finish that job.

“And by the way, I do think you played independence down in this campaign.”

IndyRef2: Campbell asks Blackford ‘do you have the time?’

“The questions you’re asking are very important ones, much of the discussion over the past few weeks Alastair, has been about the concept, the timing of any independence referendum,” Blackford commented.

“But you’re right, the fundamental questions are what type of country the economic questions, the questions the type of currency, and I promise you we will answer those questions in detail.”

It comes after SNP leader Sturgeon has told the Prime Minister it is a “matter of when, not if” there will be another vote on Scottish independence.

Her party narrowly failed to win a majority in last week’s Scottish Parliament elections, but with the Greens, there is a pro-independence majority in Holyrood.