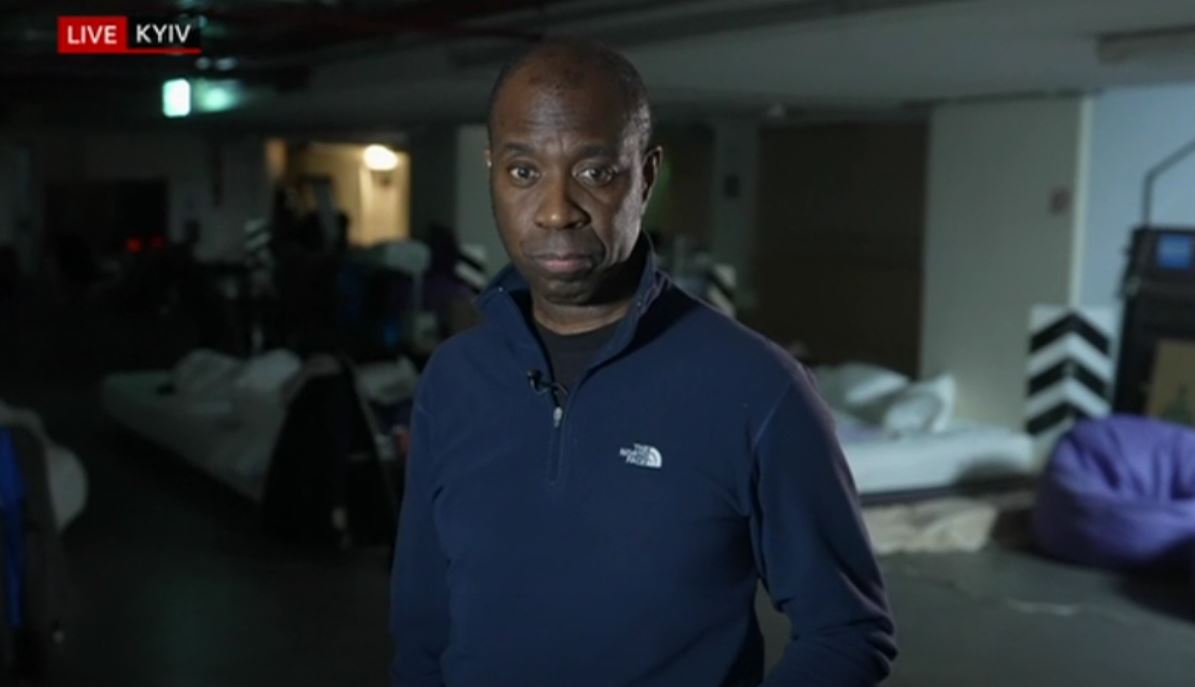 BBC News presenter Clive Myrie remained hopeful as he signed off his BBC News At 10 bulletin live from Kyiv, Ukraine despite admitting the Russian attack on the city could be ‘brutal’.

A military convoy of Russian troops has been pictured headed to the capital city, with officials warning they are likely to crush the impressive Ukrainian resistance.

Their anticipated arrival comes following TV tower was targeted and knocked out some stations, killing at least five people.

After his base was shaken by a nearby missile on Monday, Clive admitted the next moves from Russia ‘could be brutal’.

‘On a day of more war, more death, more suffering, millions are now hunkered down in shelters like this across Ukraine, trying to get a bit of sleep,’ he said. ‘But who can sleep?

‘Russian forces are on their way here and it could be brutal, frankly. But you’ve got to hope. Today is March 1, it’s drawing to a close, it’s meteorological spring, apparently. The big question for everyone here is how long could the winter last?’

Clive had previously explained his decision to remain in Kyiv, telling BBC News that it was important to accurately report the events as they unfold on the ground.

‘None of us are forced to come here, it’s part of our job,’ he said. ‘We all feel we want to tell the story of this war and tell it accurately and fairly and that is really important because there is so much crap out there that is misinformation, propaganda, nonsense.

‘What you’re trying to do, whether it’s the New York Times, Washington Post, Channel 4, ITV, Sky, the BBC are trying to be truthful to the story.

Viewers have applauded Clive for his ‘candid and calm’ answer, with one writing: ‘Honestly, @CliveMyrieBBC is a broadcasting legend. His reporting is so full of empathy and understanding for the people around him, yet he still remains balanced and composed.

‘A true masterclass in what journalism should be, especially during such a terrifying time for Ukraine.’

Echoing a similar sentiment, another penned: ‘Unbelievable respect to @CliveMyrieBBC and the whole @BBCNews team. Such brave reporting! Keep safe friends—we’re praying for you!’