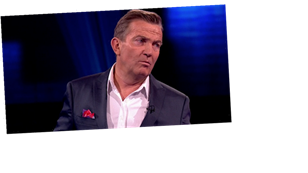 Beat The Chasers returned to our screens on Tuesday night with a familiar face in tow.

Contestant Zeus was the first person out during the latest edition of the ITV quiz show.

The player from London was instantly recognised by all five Chasers.

Host Bradley Walsh asked how the five stars knew Zeus and it was revealed that he had appeared on sister show The Chase.

Zeus explained: "I appeared on The Chase 10 years ago and I played against Anne.

"I only managed to get one question right in the head-to-head."

TV icon Bradley, 60, admitted that he didn't remember the contestant before carrying on hosting the game.

In a turn up for the books, Zeus decided to play against four out of the five chasers and ended up winning a whopping £25,000.

Viewers rushed to their keyboards to congratulate Zeus on his big win.

Another person added: "Zeus smashing it and not letting the banter get to him. Well played that man, enjoy the £££"

While a third fan gushed: "With an epic name like Zeus, of course you get to beat the chasers. Good win!"

A fourth social media user wrote: "So happy for Zeus – should have gone for Anne too!"

Before he played the game, Zeus was mocked by all five quizzers, who remembered his disasters stint on The Chase.

Mark "The Beast" Labbett explained: "He got butchered when he was on The Chase a few years ago."

While Anne "The Governess" Hegerty added: "You can't forget someone called Zeus."

"You didn't do very well on The Chase did you? You took the lower off and failed to make it back," Paul "The Sinnerman" Sinha pointed out.

Zeus decided to take a huge gamble and take on four of the quizzers in a bid to take home £25,000.

After a tense head-to-head 60 second showdown, Zeus managed to beat the quiz champions.

Discussing their deafen, The Sinnerman said: "You took all the jibes, you threw them in a ball and throw them back at us.

Anne was the only chaser who didn't play against Zeus and she teased her co-stars for losing to him.

"He still hasn't beaten me," the former I'm a Celebrity contestant joked.

Beat The Chaser continues all this week on ITV at 9pm

END_OF_DOCUMENT_TOKEN_TO_BE_REPLACED

END_OF_DOCUMENT_TOKEN_TO_BE_REPLACED
We and our partners use cookies on this site to improve our service, perform analytics, personalize advertising, measure advertising performance, and remember website preferences.Ok