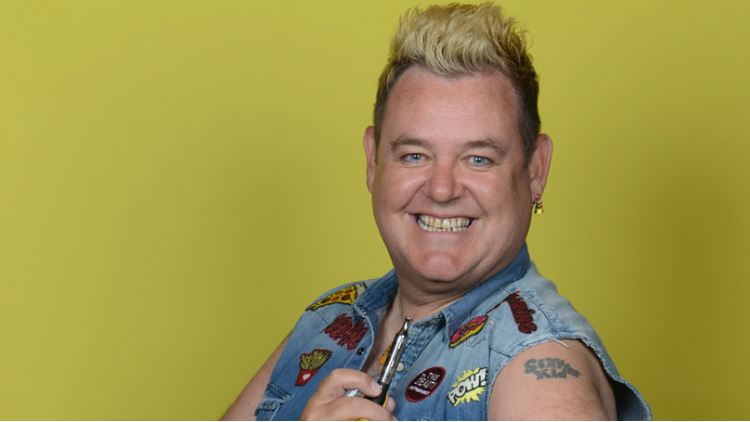 Kenneth du Beke is arguably one of the most memorable characters from wild comedy Benidorm and Tony Maudsley, who played him, is all too aware of how definitive of his character the garish hotpants were.

In fact, the star has kept six pairs of them, as well as one of the short kilts, and reckons he could sell him if he ever lost his new role as funeral director George in Coronation Street.

George is the potential new love interest of Eileen Grimshaw (Sue Cleaver) and Tony told Metro.co.uk that despite having roles in the Harry Potter franchise and starring alongside Johnny Depp, the roles he is often offered are typecast due to his part as Kenneth.

He enthused: ‘I was in a play by Johnathan Harvey and he mentioned this character he thought would be a fit with me. So I did a screen test with Sue Cleaver for this character of George – we had really good chemistry.

‘I was so flattered; I played big, loud, camp Kenneth in hotpants for so long and he was so popular but I was starting to get typecast. So I was so grateful for Iain taking a punt on me being able to play someone who is quite different.

‘That was immediately appealing to me that someone trusted me to go back into trousers!’

Despite escaping them, Tony will always have a soft spot for the pants, describing them as surprisingly comfortable. And they remain part of his wardrobe collection.

He grinned as he told us: ‘I have got about six pairs of them actually and one of those kilts, I have no idea why I kept them but you never know when you might need them for a Saturday night do you?

‘One day, those hotpants will be collector’s items. If I ever get sacked from Corrie, I can sell me hotpants!’

Be a sport Tone and wing us a pair. We all need a Plan B!

George is fitting in well with the cast and fans of Corrie and he dismisses soap snobbery when people bring up the fact he was in Hollywood films.

He revealed: ‘People do question but I don’t understand why! For me, it’s the icing on the cake for what has been a fabulous career – I’ve been very lucky.

‘At my age, I want to settle into it, I have ticked a lot of boxes and now I want to feel at home somewhere and enjoy what Corrie gives you.

‘It allows you to have a life, I can book holidays; I’ve never had that in my 40 year career! It’s the best and longest running show in TV history, I am so, so happy there!’

He added: ‘I have always been a fan of the Street and I have always wanted to be a part of it. After Benidorm ended, I missed that go to place where you build relationships over a long space of time and have that community.

‘I said to my agent, I am at the place right now where I’d really love a part in Corrie and she said, ‘let’s keep an ear out’.