Better Things‘ last season is upon us, and this is bad news. Very bad news. The silver lining: Beginning Monday, 10 brand new episodes are heading our way. Relish them, fellow TV fans, because in just a nine weeks’ time, we’ll be bidding farewell to one of the best characters currently on TV: Sam Fox.

In the Season 5 premiere, we once again ride shotgun throughout a day in the life of Pamela Adlon’s Sam. On a call with her mom, Sam promises to pick her up for “the thing” (which turns out to be a genealogy test), but Phil is convinced she has “nothing to learn from the dead.”

Marion calls and Sam asks her brother to explain finances to her. He confirms that he doesn’t have enough days left in his life to explain NFTs to her. “It doesn’t work with you and me, specifically because of you,” he barks. “You have the attention span of a rainbow trout!”

Before the test, Sam meets Max to co-sign for her new studio apartment, which honestly, looks kind of like a dump. (Located above a urine-soaked alley? Hard pass.) But apparently, Sam’s credit score isn’t good enough to co-sign, which seriously bums out her daughter. Frances Farmer lived there before or after she was institutionalized. “One of those,” Max says. #Hollywood!

At the genealogy test, Sam and Marion learn some shocking family history. Only one member of their family made it out from under Hitler’s rule: their cousin Clara. Clara had two children with her husband Anatoly, but once Anatoly’s mother found out Clara was Jewish, she turned them over to the Nazis. They were all executed. (Yikes.) They then find out that their grandfather wasn’t actually their grandfather! Marion is convinced Phil knew, and is more than peeved by his mother’s assumed secret-keeping. 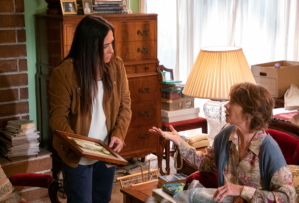 Needless to say, Phil doesn’t seem to give a damn that her dad wasn’t actually her biological father. She also doesn’t care to keep the heaps of family mementos that are piling up as she cleans out her place — not even a framed photo of her deceased brother. Sam expresses interest in some of her grandmother’s writing, and gets psyched when she finds her old baseball cards.

Frankie reminds Sam of a dinner she forgot about, and off they go to celebrate a friend’s admission to Harvard. The drinks start flowing, and after dinner, they finally get the kid’s drunk mom (Oh, hi Angela Kinsey!) in the car to head home. Back at the house, they find Rich there drinking his face off. The power briefly goes out, but thanks to Sam’s powerful new generator, it turns back on fairly quickly.

However, in the midst of her celebrating the fact that she’s a badass provider for her family, Sam accidentally knocks over the statue at the top of the stairs. It falls aaaall the way to the ground below and smashes to pieces. Her eyes go wide. She’s speechless and in shock. She blows on her fingers and walks out the front door.

Happy Better Things is back? Sad that it’s ending? You know the drill: Grade the premiere, then hit the Comments!