This past July 16, Billy Porter made Emmy history as the first out, gay man to be nominated for Outstanding Lead Actor in a Drama for his portrayal of drag ball emcee Pray Tell in FX’s much lauded series Pose.

And as Billy revealed on Friday night — coincidentally two years to the day after his initial audition for the series — as he sat down at the Pacific Design Center in West Hollywood for an interview with that show’s creator and overall impresario Ryan Murphy, it took him a long time to recognize his own potential as a “leading man.”

After graduating from Carnegie Mellon University in his native Pittsburgh and moving to New York, Porter says “I had made a space for myself in the industry, because I knew that if I showed up as the funny friend, as the side flamboyant guy, as the one who can sing and scream the roof off the place and stop your show, then I could work. I needed to be able to make myself work so that I could eat. And it never occurred to me that what I [would have] to give up to be a leading man was everything.”

And in fact, initially Porter’s role on Pose was not intended to be as big or as central to the action as Pray Tell has turned out to be. In that first audition two years ago, Porter read for a different part, the very small role of “dance teacher.”

The part Porter ultimately landed, Pray Tell, was at first named merely “the emcee,” as Murphy explains, and had at most two lines. But convinced of the talents of the recent Tony Award winner for Broadway’s Kinky Boots, Murphy asked casting director Alexa Fogel and fellow producer Brad Falchuk to meet with Porter and to be creative. 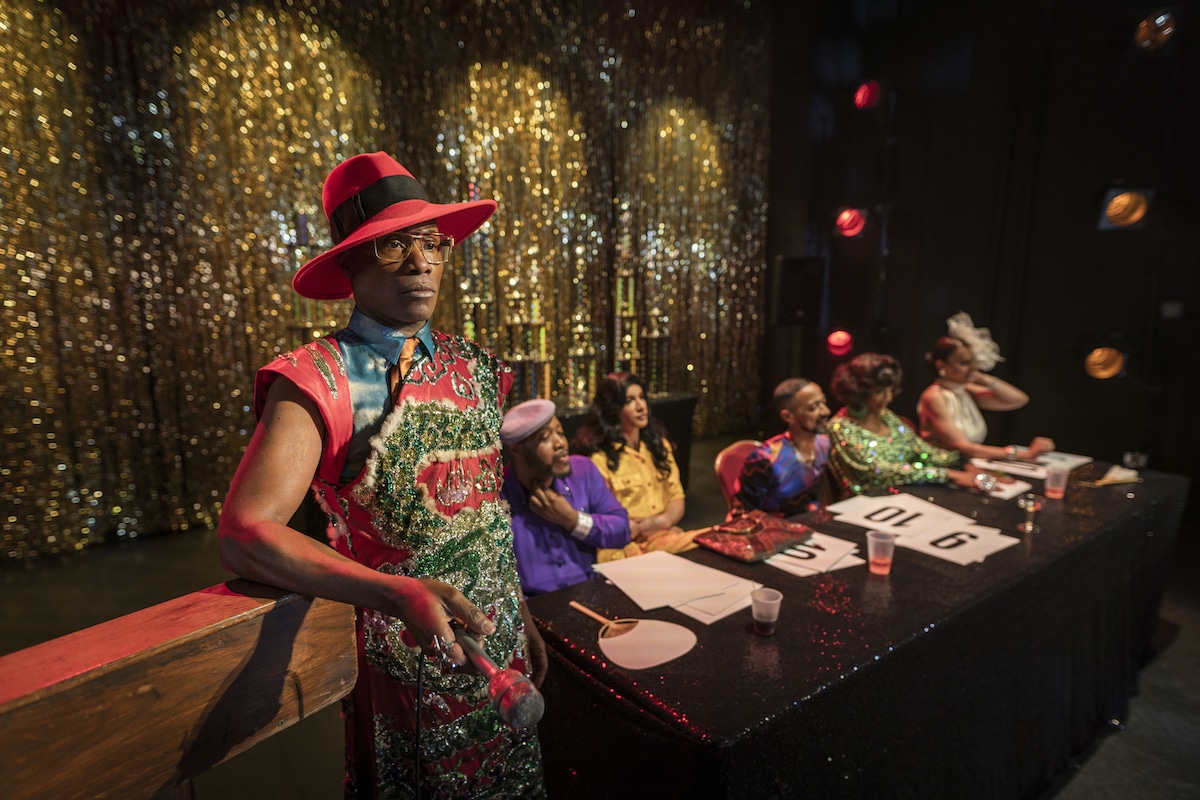 As Porter remembers: “I went in and I did the [dance teacher] audition and then I said to Alexa Fogel, there has to be something else for me, right?

“I lived through this era, [and] it would benefit everybody if I was actually in the story that they’re talking about. And that’s when I learned… that the idea was to go transgender, which I knew was brilliant.

“So I did say  ‘Maybe [I could be] the male energy over there.’ … [Later] this call came, I came in and we sat and we just sort of talked about one of the things that draws me to the material, which is that I was there.  It was my era. I moved to New York on December 27th, 1990.

The role turned out to be just what Porter needed not only to break through to a new level of mainstream fame, but at then age 47, to undo decades of Hollywood’s and his own inner conflict between the requirements for male stardom and the true display of his talents.

“I’ve never gotten a lot of love from Hollywood. When I came out, being gay was not the thing. Being black and gay was really not the thing. I’ve always been told that I’ve been too flamboyant, I’m too much. I’m too this, I’m too that, that it’s always my fault,” Porter remembers.

And so, while rehearsing his first Pose drag ball scene, “I was doing what I thought my television performance should be. I was trying to play Pray Tell, [but] use Billy’s television [skills] — be smaller, be still, don’t be so crazy.

“And then [Murphy] walks in and is like, ‘What, are you going to give me the shit? I need the shit! I need you. I need whatever you do. Don’t worry about being too big!’ I had never said anything to him about it, but he knew instinctively. He said, ‘I’ll deal with that. You do you.’ And it was so freeing to finally be, essentially, set free. I was set free on that day and I never turned back.”

Already a Tony and Grammy award winner, an Emmy would put Porter — who turns 50 on September 21, on the eve of the awards ceremony — on the path to becoming an “EGOT,” a winner’s circle of Emmy, Tony, Grammy and Oscar recipients that, to date, counts a mere fifteen members.

Famous for his fashions on the red carpets at the Golden Globes this past January (courtesy of Christian Siriano) and the Met Gala in May, Porter already has his Emmy outfit on the way, custom-designed by Michael Kors.

The occasion, coupled with a milestone birthday, seems to have brought out the contemplative side in Porter, as he both explained his past mindset and credited Murphy for launching him to this level of success.

“Twenty years ago I looked at the landscape, I looked at my life, and I made the choice to choose myself, choose my sanity over my fame. To choose authenticity over all else. And I took every hit that comes with that,” he remembers.

“So you fast forward to this, and you [Murphy] have put me in this position where the impossible can happen. There [had been] no context for what I’m looking at right now. It’s really hard to dream what you don’t see. All of my dreams were spring-boarded off of things that I had already seen before.

“You know, I was not dreaming Pray Tell. I was trying to live up to a heteronormative masculinity standard so that I could get a job on Grey’s Anatomy or whatever. Never did I imagine that I could and would be a first.  It’s very profound…. And I’m really excited about that because what I know for sure is that everything that I’m doing is right. I have no doubts. And that’s different from my first time around.

“I don’t question any of my choices at this age. And it’s because I’ve lived long enough to see what it looks like on the other side.”