Bow Wow is a new dad once again! The rapper, actor and Masked Singer finalist took to his Instagram story on Thursday to confirm he welcomed a baby boy with model Olivia Sky.

Bow Wow — whose real name is Shad Moss — shared a super cute snapshot of his baby boy, alongside a king emoji and a winking blue heart emoji.

No details have yet been released regarding the baby’s name or when he was born.

The photo seemingly puts to rest speculation about whether or not he was the father of Sky’s baby boy, which were sparked when she first shared a snapshot of the cute kid to Instagram on September 18. 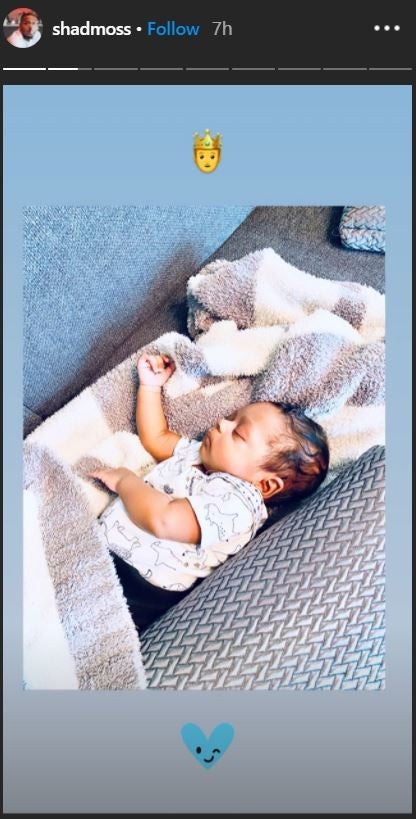 Sky’s photo showed the baby boy laying on a blanket covered in images of puppies, and she captioned the pic, “My dawg for life.”

On Thursday, the rapper also shared the adorable photo on Twitter. “Man you gone take all the girls,” he wrote.

Man you gone take all the girls. 🤴 pic.twitter.com/tOjqoxQFyu

Three days earlier, Bow Wow — who is also the father to a 9-year-old daughter, Shai, from a previous relationship to Joie Chavis —  took to Instagram to share a bit of his new song, “D.W.M.O.D,” which is short for “Dealing With My Own Demons.”

“I’m finally letting you guys in. dont do interviews really but i put my life in my music the answers are there if you LISTEN carefully,” he captioned the clip.

The lyrics in the clip seemed to address his newborn son with Sky, without confirming his paternity directly.

“Shai asking about a brother, I don’t know what to say. That’s gone be one of them talks we have face-to-face,” he raps in the song. “I’m looking in his eyes, I’m trying to see me in him. I’m peeping out his swag, and I see the resemblance.”

END_OF_DOCUMENT_TOKEN_TO_BE_REPLACED

END_OF_DOCUMENT_TOKEN_TO_BE_REPLACED
We and our partners use cookies on this site to improve our service, perform analytics, personalize advertising, measure advertising performance, and remember website preferences.Ok