Britain’s Got Talent ended with an absolute tear-jerker tonight when Miracle the rescue dog took centre stage. He had come along to the auditions with owner Amanda to take part in a magic trick which needed the assistance of the judges. In true magic trick style, there was a heart wrenching story behind it, but those watching at home were left divided; was any magic actually involved or was it was some called a “sob story” to win over the judges?

“Now my dog is called Miracle, and today we are hoping to show you a real miracle,” the voice over began.

Ant and Dec then walked out onto the stage to take hold of the dog while Amanda conducted the trick.

“Now Simon, I know that you love dogs, so in front of you is 40 of my dogs that are back home,” Amanda said.

“I would like you to cut those photos into four roughly equal piles,” she asked the judge to which he did just that. 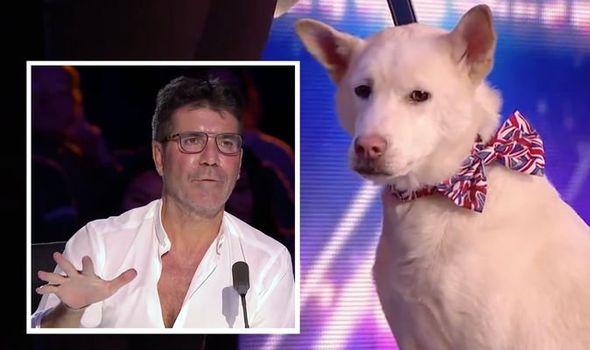 “Now I want you to take one from each pile from the top – don’t show me,” Amanda continued.

“Take one for yourself, then pass three to Amanda – don’t show me. Then Amanda, if you can do the same, you keep one, pass that to David as well.

“Now, there’s no possible way I could know which cards you’ve taken. So you can see they are completely individual,” those watching at home heard her say.

“Now you may wonder, why I have those 40 dogs. This is going to explain the story.”

A powerpoint was then played which revealed Miracle and several other of her dogs were rescued from a meat trade.

Understandably, the presentation sparked emotions with the judges and the studio audience leaving many of them in tears. 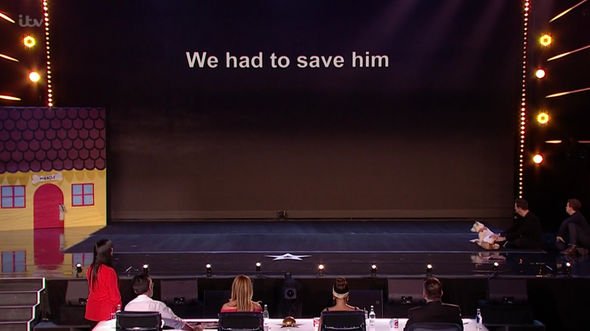 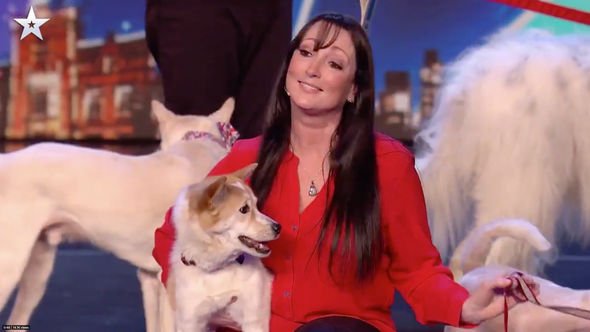 Once it finished, Amanda returned to the act in hand and said: “I have no idea which photos you chose. But Miracle did and here’s something we filmed earlier today.”

Amanda had asked Miracle which four dogs they were going to take to the BGT auditions, and those corresponded with the images chosen by the judges.

However, those watching at home were torn as to whether or not this act should be classed as a magic trick or a “sob story”.

Taking to Twitter to comment, one said: “#BGT isn’t a platform for political debate. It’s a talent show. Sob stories aren’t talent no matter how important they may be.”

“I’m sorry but that wasn’t displaying any talent, she just made it all into a massive sob story and pulled at the judges heartstrings and went for the sympathy vote…. #bgt,” someone else wrote.

Another added: “That wasn’t an act. A feeble card trick with a long sob story. That isn’t talent. #bgt.”

“I’m 50/50 on that dog act. I loved the story & it’s brilliant she rescued all those dogs.But how do we no she don’t have multiples of the breeds the judges choose?And we didn’t rly see Miracle ‘pick’ the 4 dogs, cudnt she hav chosen them herself?Feelin confused & conflicted,” a viewer wrote.

However, others praised the act for raising awareness of the issue.

“Anything to do with animal cruelty has me in bits. Poor Miracle&all the other rescue dogs. So glad they are safe and loved now #BGT,” someone said.

While on fan commented: “I am sobbing at miracle the rescue dog audition. absolutely heartbreaking but amazing story #BGT.”

Others hit out at the show for allowing sensitive and graphic images to be shown during the family show, especially when no warning was given.

A tweet read: “How disgusting to show a pic of a dog in a bad state well done @bgt think ur get loads of complaints #BGT.”

“BGT why are you showing pictures of dogs in foreign meat factory’s @ITV you should be ashamed, family entertainment show my arse !!!!!! #BGT #itv #disgraceful,” someone else wrote.

A third added: ““Absolutely disgusting and irresponsible broadcasting showing the image of the dogs caged and left for dead, it’s a family show and children are watching.”

Amanda and Miracle got four yeses and made it through to the next round.

Britain’s Got Talent returns next Saturday at 8pm on ITV.