Carol Kirkwood, 58, was on hand to present the weather forecast on BBC Breakfast, joining hosts Dan Walker, 43, and Sally Nugent, 49. The latter is currently stepping in for presenter Louise Minchin, 52, who usually oversees proceedings on the show for the first few days of the week. This caused some confusion for the forecaster who seemed to make an error when she was handing back the reins of the programme to her BBC colleagues.

After presenting the forecast at the top of the hour, the weather presenter said: “But now Sally and Dan, back to you.”

The meteorologist paused for a brief second after saying Sally’s name, seemingly forgetting who the other host was.

It might not have been evident to viewers but thanks to Dan, the forecaster was left red-faced as she admitted to the blunder.

Laughing at his co-star’s delayed response at forgetting his name, the broadcaster said: “Thank you very much, Carol. It’s very hard to remember names when the presenters are changing all the time.”

“We’re all over the place, well I am,” the forecaster replied as she too couldn’t maintain a straight face. 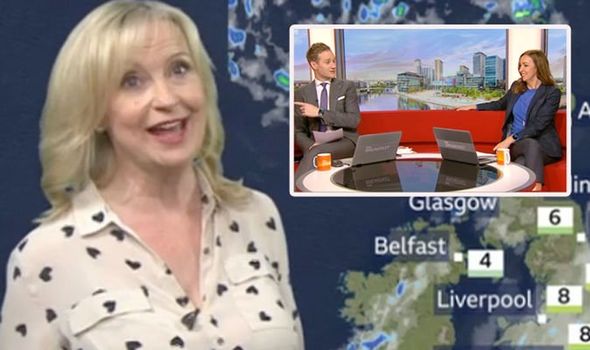 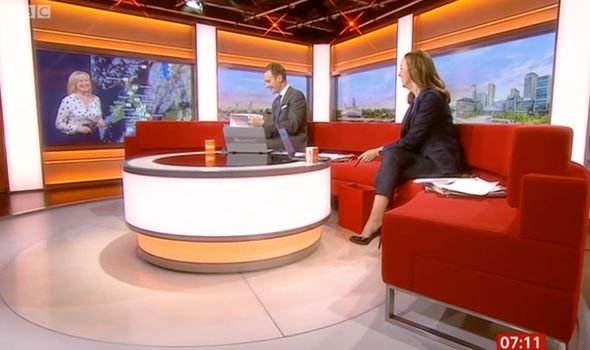 Once the weather presenter was removed from the screen, Sally told her co-host: “Carol could have got away with that then if you hadn’t giggled.”

“Well, it’s because she was laughing. When I see Carol laugh she makes me laugh,” Dan told his fellow presenter.

Despite the error, viewers seemed to have been distracted by the forecaster’s attire she was seen wearing on the show.

The meteorologist wore a blue denim skirt and a cream coloured blouse, littered with a pattern of black hearts. 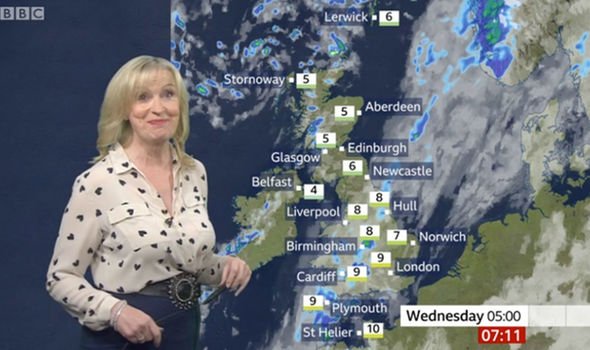 We’re all over the place

Completing the outfit was a waist-height black belt and fans were loving the look as one wrote: “@BBCBreakfast Have to say how beautiful Carol Kirkwood looks today. That style really suits her. #BBCBreakfast.”

The forecaster took to Instagram on Tuesday morning to share a picture of her in her outfit behind a green screen.

“Carol you brighten every morning,” one fan replied, with another adding: “Beautiful smile. Morning Carol.”

The weather presenter has often spoken out about the joy of being able to host the forecast for BBC Breakfast on a daily basis.

“I love my job. I love the weather and the fact that no two days are ever the same,” the former Strictly Come Dancing star confessed.

Revealing how she got into her area of expertise, Carol explained: “My interest in weather was accidental; it wasn’t something that I set out to pursue.

“I just wanted to work for the BBC. So, when I was 12, I wrote to Blue Peter asking if I could come and be a presenter.

“They kindly replied to say that I was too young, but that I should go back to them with a degree. When I got to the age at which I was eligible to apply to Blue Peter though, I had become far too shy.

“I ended up becoming a BBC secretary instead, before moving into production as an assistant,” the forecaster told The Windsor magazine and the rest is history.