Carol Kirkwood scolded by Dan Walker for yawning on BBC Breakfast: ‘Stop it’

Carol Kirkwood, 58, joined Dan Walker, 44, and Louise Minchin, 52, to inform viewers of the latest weather conditions on the BBC programme. However, throughout the morning, the BBC Breakfast hosts got the forecaster involved with their conversations. When the Football Focus presenter decided he wanted to talk about some golf news from the weekend, he began discussing the conversation with his co-stars.

Louise was ready to hand over the reins to the weather presenter but Dan interjected as he said: “We’re going to go to Carol in a minute but I just want to mention something.

“Which is linked to the weather but it also a brilliant story from the weekend and it does involve golf but don’t do the golf face,” he continued as he could see his co-host was going to start laughing.

However, the 52-year-old then alerted her colleague to the fact Carol was “already yawning”, even though the story hadn’t begun.

Scolding the meteorologist, Dan said: “Stop it” as he adjusted his position on the sofa to look at the weather guru.

The Football Focus star continued: “Last week, the British Masters was held at the Belfry.” 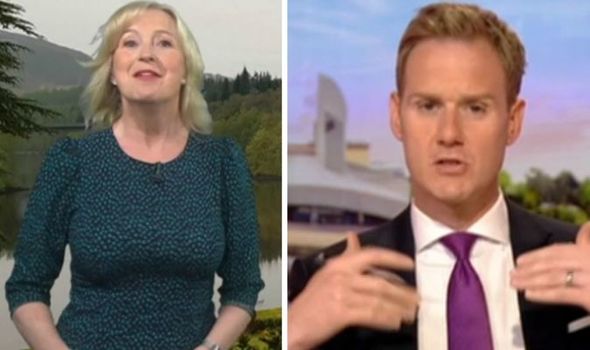 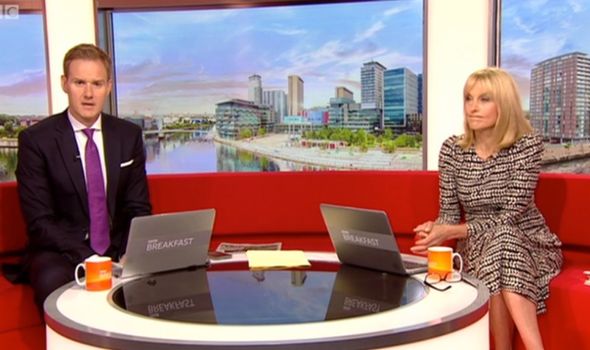 “There was an amazing story that happened there,” he added as Carol could be seen giggling away in the background.

Dan said: “In the wind and the rain on Saturday, this guy called Richard Bland, he’s 48-years-old and he has started 478 tournaments and never won a single one.”

“That’s a lot of tournaments,” Louise remarked before her co-star explained: “Then on Saturday, he managed to win the British Masters at the Belfry. 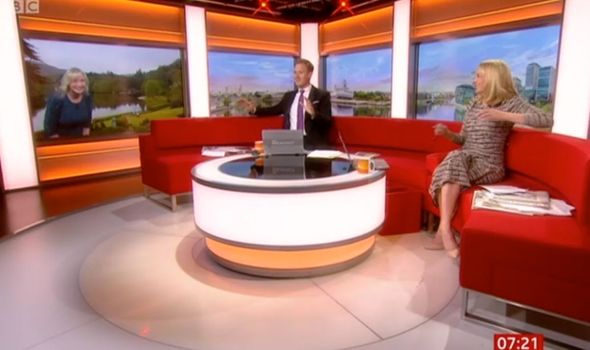 There we go Carol

“And the guy interviewing him at the end is Tim Barter – works for Sky Sports – and Tim has been Richard’s coach for 20 years,” Dan continued.

“As he’s walking off, Richard is in tears because he’s won for the first time in such a long time and he had to go off the main tour into the challenge tour a few years ago to try and come back onto the main tour.

“And Tim his coach was also in tears because he knows how hard he and Richard worked and they’d got to this moment.

“Then he comes off the 18th green, he speaks to his mum and dad, who have spent a lifetime watching their son not win tournaments.” 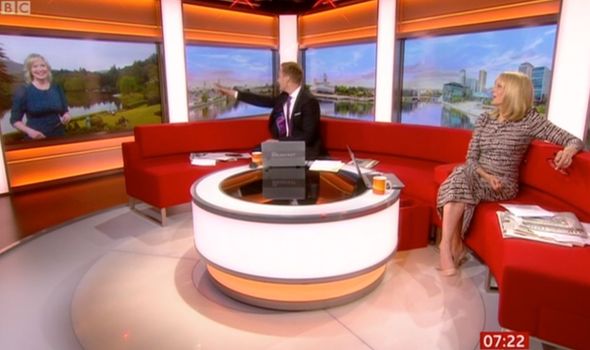 “Wow,” Carol replied after hearing the whole story, with her co-star commenting: “There we go Carol, that’s the reaction I wanted even if you don’t mean it.”

The weather presenter added: “No, I do [mean it]. That’s fabulous, well done.”

“You’ve even got a little golf hole behind you,” the Football Focus host said as he noticed the green screen behind Carol was displaying a picture of a golf course.

“Get your magnifying glass out, Dan,” the forecaster quipped as she said viewers at home wouldn’t be able to see the golf hole.

Carol got the weather report underway but she reiterated the news about the golf was “good news” before carrying on with her duties.

The meteorologist explained to those at home the weather was going to be mixed across the UK, with a mixture of clouds, showers, and sunshine.

Taking to Twitter, viewers were enjoying seeing the forecaster on-screen as one wrote: “Carol Kirkwood on #BBCBreakfast is my girl crush.”