Chicago Med Premiere Recap: Who Had COVID? Who Broke Up? — Plus, Grade It

Chicago Med was hit hard by COVID-19 during Wednesday’s Season 6 premiere — and one doc even contracted the coronavirus, potentially from a loved one.

From mandatory tests to air showers to UV light machines to vigils for the victims, the ED was in full-on pandemic mode. Will is relieved they finally have enough PPE and that the safety protocols are working, but “I thought we’d be over it by now,” he admits to Dr. Charles. Speaking of Charles, he’s recovering from COVID, and his daughter thinks he’s angry with her for possibly giving it to him. Meanwhile, Goodwin has been ordered by the board to conduct meetings from home since she has diabetes.

Now, let’s check in on where things stand between the show’s exes, couples and would-be couples:

WILL/HANNAH | Will brings Hannah into the ED after finding her unconscious with a syringe. Clearly, their relationship has deepened since we last saw the couple, because Will declares, “I love you,” as they ride in the ambulance. In fact, Will acknowledges that he and Hannah are moving faster than normal, deciding to live together due to quarantine. He expects a “told ya so” from Dr. Charles, who warned him that some addicts replace drugs with romance, but Charles just offers a supportive ear. When Hannah finally wakes up, she reveals that she heard Will’s “I love you” and vows to go back to rehab. “I swear, I will make this up to you,” she promises. “I’m going to be so good.”

But the future is not looking so good for Will and Hannah: He confesses to Dr. Charles that their relationship has actually been like “hell” and that he thinks Hannah turned to drugs after they had a huge fight. Worst of all, he was waiting for her to relapse.

Hannah wants a fresh start post-rehab and invites Will to come with her to Los Angeles. She’s worried that without him, she’ll start using again. Will argues that he can’t be the reason she stays sober, so the two go their separate ways. 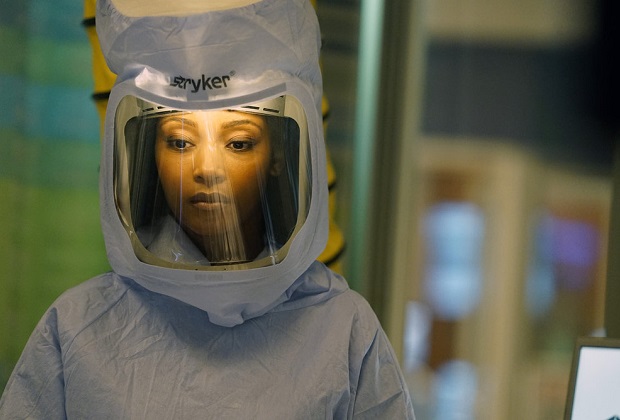 ETHAN/APRIL | Ethan and April are still broken up, but he can’t help looking out for her when he notices that April is working her third straight week in the COVID ICU, putting her at risk of exposure. April refuses to abandon her patients, noting that they have already faced discrimination and poverty, and now they have to deal with COVID, too.

NATALIE/CROCKETT | Natalie and Crockett start off on a friendly note, with Crockett joking that she’s moved into Club Med (aka the Pavilion). (She left her home to protect her son.) However, that good vibe doesn’t last long after Natalie opts not to page Crockett for a consult on her young leukemia patient, deciding it might be “too close to home” for the doc. “What you just did — that’s why I don’t tell people about my past,” he responds. Natalie later apologizes for being overly cautious with their patient, and Crockett admits that she wasn’t wrong about the effect that kids with leukemia have on him. He even starts to choke up, but then curtly brushes it off: “I’m going to be OK. See ya tomorrow.”

Med fans, what did you think of the season premiere? Grade it below, then hit the comments!