Kevin (played by Michael Le Vell) has a chequered past when it comes to affairs on Coronation Street, having cheated on Sally (Sally Dynevor) with Tyrone Dobbs’ (Alan Halsall) late ex-wife, Molly Dobbs (Vicky Binns).

The affair was explosively revealed during the ITV soap’s live episode to celebrate its 50th anniversary back in 2010, when Molly was left fighting for her life after a tram ploughed onto the cobbles.

Molly was joined by Sally during her final moments, who was unaware of Kevin’s infidelity until her husband’s lover revealed the garage owner was the father of her new born son Jack Webster (Kyran Bowes).

Eight years after his mother’s death, Jack took centre stage in a harrowing sepsis plot which saw the young schoolboy’s leg amputated and since then, Kevin has focussed all his attention on trying to help his son adjust to his new life.

Having taken little time for himself and his love life, next week’s episodes will see a potential romance on the horizon after a break in at the Webster family home during this week’s instalments leaves the Kevin shaken.

The garage owner begins the week fuming with daughter Sophie Webster’s (Brooke Vincent) girlfriend Paula Martin (Stirling Gallacher) as she led the intruder to the cobble, with the shady character seeking revenge on the lawyer for working against them in court.

Kevin will tell Paula she has to leave after putting his family in danger, but soon has a change of heart when he realises how happy the lawyer makes his daughter.

Giving Sophie’s relationship the go-ahead, Kevin will later bond with Abi Franklin (Sally Carman) when she asks for her old job at the garage back after previously coming to blows with the owner.

Abi had secured a job at a rival garage after a spout of unemployment, but after trapping her bosses hand under a car bonnet, the desperate mechanic pleads for her Kevin to give her another chance.

Winding Abi up about her recent faux pas at the rival garage, Kevin goes on to give the mechanic her old job back, to which she will be over the moon. 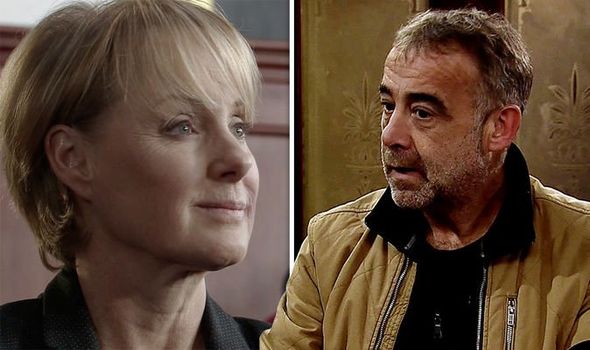 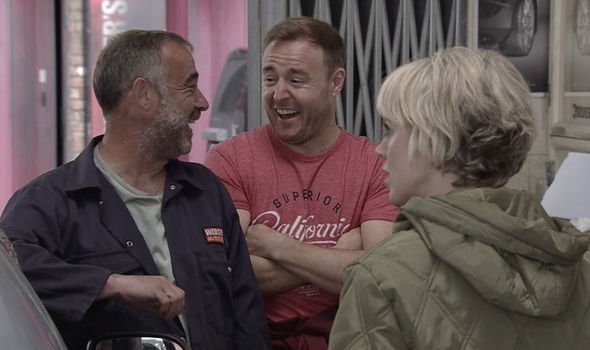 As Abi revels in her accomplishment, Kevin is also in the celebratory mood and asks his employee if she would like to join him at the Bistro in light of her comeback to the garage.

Accepting Kevin’s invitation, Abi and the garage boss get on swimmingly as Sally watches on, seeing how happy her lodger is with her ex-husband.

Instead of being jealous as she’s now happily married to Tim Metcalfe (Joe Duttine), Sally will surely want to devise a plan to bring Kevin and Abi closer together.

However, Kevin and Abi may not need any help as their date goes remarkably well considering their past disputes.

Are the Weatherfield residents beginning to see each other in a new light, possibly set to become the new power couple of the cobbles? 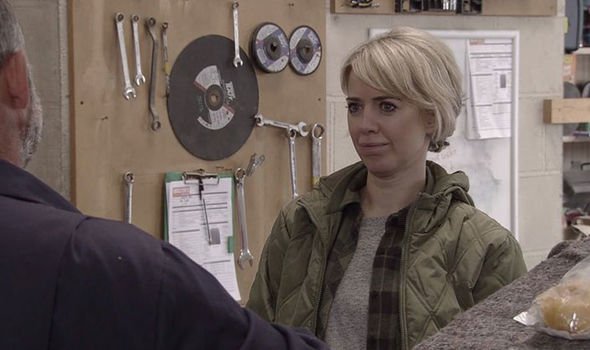 Although Paula will be forgiven for brining criminals to her girlfriend’s door, the hot shot lawyer won’t forget the matter anytime soon.

Speaking about her character’s reaction to the break in at No.13, actress Stirling, 48, said: “I don’t think Paula would have made a conscious choice to endanger Sophie or her family in her own interests but fear can skew a persons judgement and Paula is way more scared than she is letting on.

“Does she feel guilty about what happens and how Jack was put in real danger? Yes of course!

“She’s mortified. To put a small child at risk like that is awful,” Stirling explained, so is more danger set to come?

Upcoming scenes will also see the arrival of Gemma Winter’s (Dolly-Rose Campbell) mother, Bernie Winter (Jane Hazlegrove), but how much havoc will she cause?