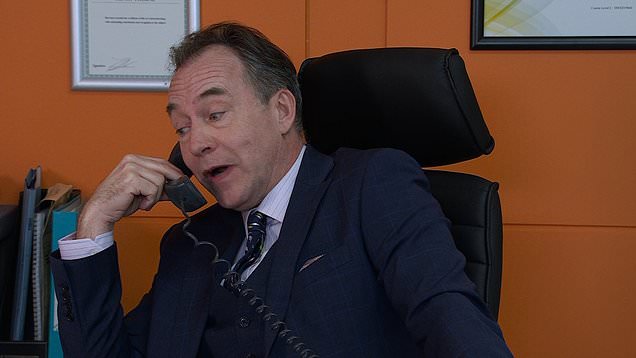 When Peter discovered this information yesterday, he was furious, adamant Mr Thorne should lose his job for abusing his position of power.

Carla (Alison King) and Peter learnt Mr Thorne had been suspended and was being investigated, but when they met a member of the hospital management team, even worse was still to come.

It was revealed that Thorne had shared a selfie of himself in the operating theatre, holding Peter’s liver in his hands. The picture was captioned ‘Anyone for foie gras?’ with a reference to the duck or goose liver paté that’s often made by force-feeding the animal.

Peter and Carla were disgusted – and so were the fans!

Thorn needs to be taken down a peg or 2 & he deserved that punch but unfortunately Peter has given him ammo.
no matter how many powerful friends Thorn might have he can’t talk his way out of that selfie.
smfdh a selfie ffs!#Corrie

‘Dr Thorne should be sacked for doing that. Taking a selfie holding Peter’s liver is nasty. Patient confidentiality out the window there!’, one Twitter user wrote last night.

The surgeon taking a selfie during Peter’s liver transplant surgery and posting it on his socials! That’s low! ð£ #Corrie

Dr Thorne should be sacked for doing that. Taking a selfie holding Peter’s liver is nasty. ð¡ð¡. Patient confidentiality out the window there #Corrie

Another added: ‘The surgeon taking a selfie during Peter’s liver transplant surgery and posting it on his socials! That’s low!’.

I am absolutely disgustedâ¦. He took a selfie? Good grief. What a sicko! #Corrie

As the episode drew to a close, Peter tracked Thorne down to a fancy restaurant.

A smug Mr Thorne showed no signs of remorse and refused to give Peter and apology.

Peter saw red and punched him and was later arrested.