If you liked 1992’s The Muppet Christmas Carol, Zach Tinker and Chandler Massey say that Sonny and Will are the Statler and Waldorf of Peacock’s holiday movie Days of Our Lives: A Very Salem Christmas.

That’s because the standalone flick, which streams this Thursday on the Peacock service, features the two actors’ characters as narrators/story creators who spin a fanciful and wondrous tale that imagines an multiverse version of Salem. And like the Muppets offering, there’s a Scrooge, romance and Christmas miracles.

But the likenesses end there, because this Days movie also includes one woman slapping another repeatedly, mate and baby swapping, kissing, partial nudity, deceit, divorce, and one really cute kid.

“It’s very tongue-in-cheek, the way Beyond Salem was,” Tinker excitedly tells TVLine, referring to Peacock’s limited series from September. “It’s fun and doesn’t take itself too seriously, which is the way Christmas movies should be. If you enjoyed Beyond Salem, you will like A Very Salem Christmas very much.”

Massey agrees, and adds that his favorite part is seeing the cast and returning stars rise to the challenge of playing their characters in completely different ways.

“It allows everyone to shift to a more unfamiliar medium,” Massey shares. “Because of this, we’re allowed to create a wackier, bolder and more refreshing and whimsical take on the story and the characters you thought you knew.” 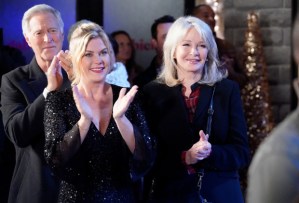 This includes Alison Sweeney’s Sami. In Days of Our Lives: A Very Salem Christmas, Sami is warm and sweet, and has a very close relationship with her mother Marlena (played by soap icon Deidre Hall).

“There are all of these scenes where Sami and Marlena are together,” Sweeney previews. “And it was great getting to play that out with Deidre. She and I had such an enjoyable time doing our scenes, and that was the greatest aspect of it. Say what you will about Sami, but all she has ever really wanted was to have her family together and to love, be loved, and have her kids with her. Without giving too much away, that’s her Christmas wish, and because of that, some things about Sami never change.”

Sweeney says the beauty of the Days of Our Lives holiday movie is that it is independent of NBC’s day-to-day sudser, which also means Marlena doesn’t get possessed by the Devil (again). 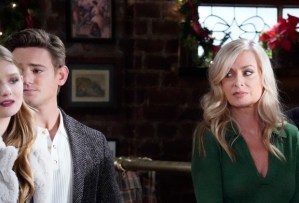 “Because it’s a standalone project, you can watch it again and again like any other Christmas movie,” Sweeney adds. “It’s a great way to celebrate the holiday with your favorite characters in Salem. That’s why I was super-excited to be a part of this because I have so much fun being on Days and playing Sami. It was really fun to be a part of the twists and alternate universe Ken Corday and Ron Carlivati created.”

Sweeney also knows that the Sami haters are going to hate —  and she is fine with that, too.

“This special allows fans to see Sami in a different light and how she would’ve been if things had gone differently,” Sweeney surmises. “When I am filming it, I think about fan reaction, because I’m a fan. And I love following what the fans think about certain episodes and scenes on Twitter and Instagram, right up until the moment I don’t love it anymore and get upset. Hopefully, the reactions to this version of Sami will be more good than bad.”

Are you excited to tune into Days of Our Lives: A Very Salem Christmas and getting to know a softer and cuddlier Sami? Drop your thoughts in the comments.