Devoin Austin explodes on Briana DeJesus in a series of text messages, and he shared the entire conversation with Teen Mom 2 star on social media.

The gloves are off for Devoin as he continues to battle his baby mama Briana, with no cease-fire in sight. Their latest round of feuding appears to be over picking up daughter Nova and filming the MTV show.

Devoin used Instagram Stories to share various text messages between him and his baby mama. Although there does appear to be some messages missing, fans can easily get the gist, which is these two are once again battling.

The chain of events begins with the parents discussing dropping off and picking up Nova from gymnastics. Briana and Devoin’s chat starts civil until he realizes she is changing the schedule on him.

After Briana sets out the week’s schedule, Devoin loses it when he learns he will not get Nova on Friday as he planned. It turns out both parents had something planned with their little girl.

Briana won’t give in, though, claiming that Devoin only makes plans with Nova at the last minute. Devoin appears to end the conversation on a pleasant note as they confirm Nova’s gymnastics pick up schedule. 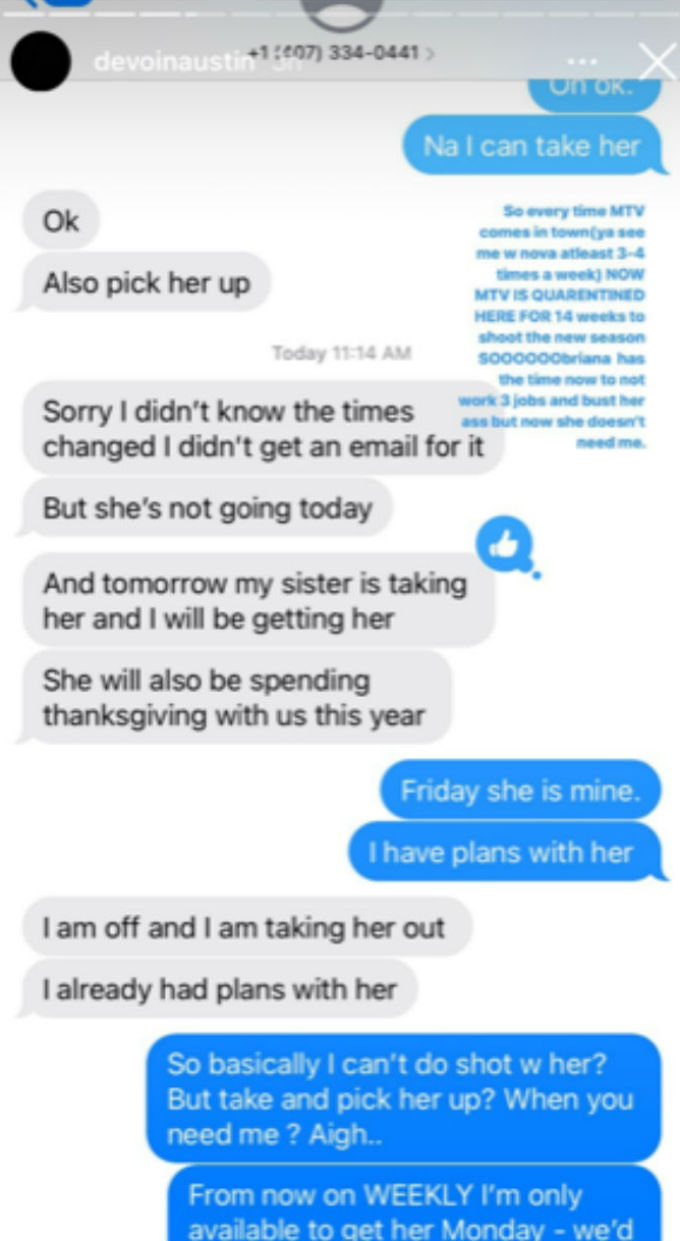 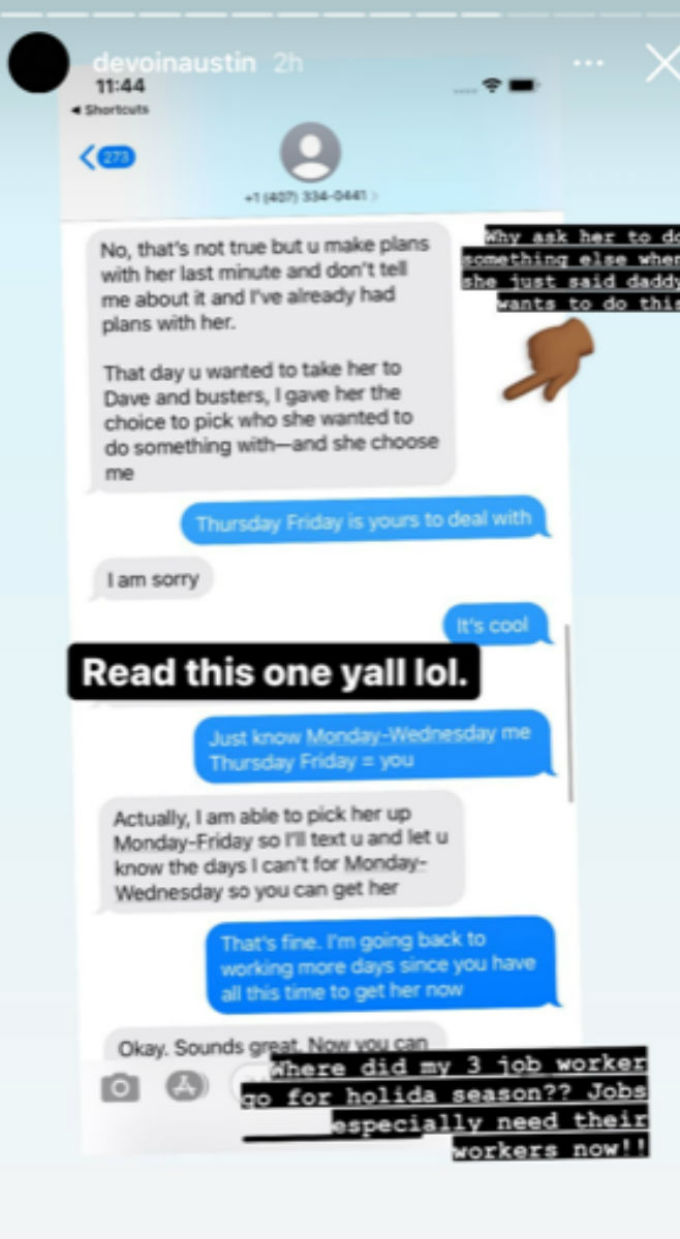 However, as the subject of filming Teen Mom 2 comes up thanks to Briana, Devoin explodes on her.

The behind-the-scenes drama for Teen Mom 2 can be more explosive than what fans see on-screen. That is the case with Briana and Devoin after she informs him that she will not film the new season with him.

Devoin makes it clear he has not signed anything with MTV. He comments on the text exchange picture appears to diss his baby mama. Devoin even alludes fans could see a new boyfriend or baby from Briana next season. 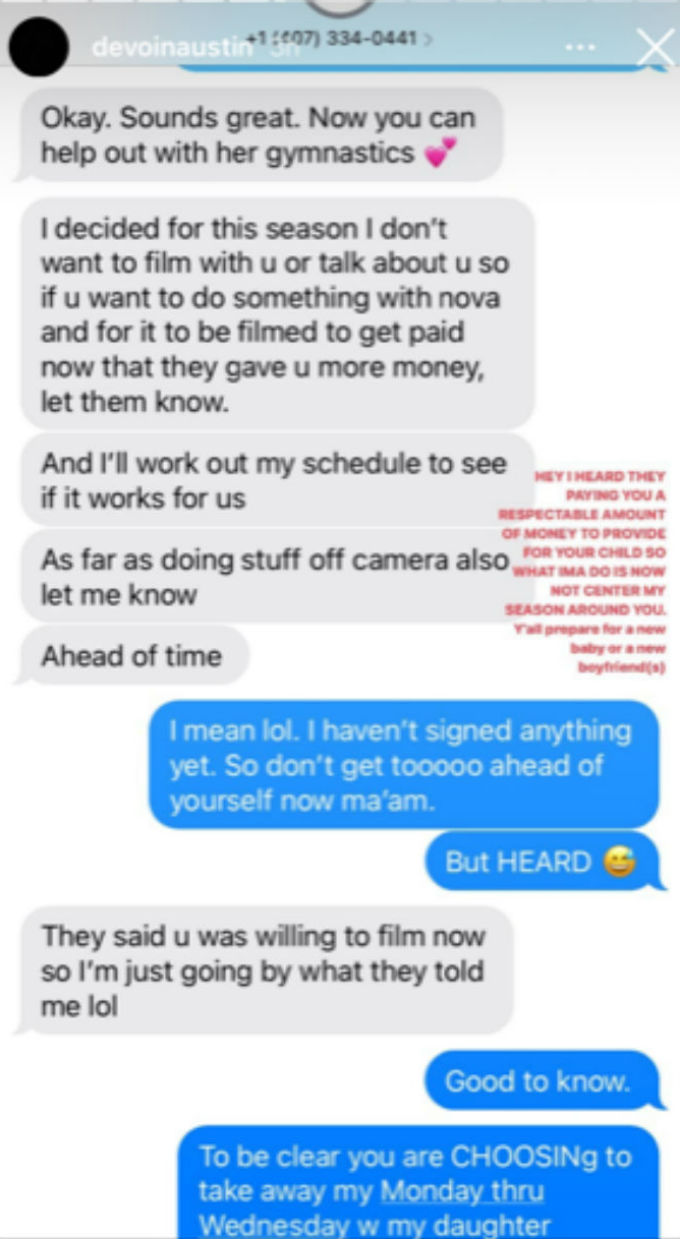 The subject quickly changed as Devoin turns it back to Nova’s schedule, blasting Briana for having more time to pick up their daughter when the show films.

“You conveniently around SEASON time have the availability to do it. Briana, you are scum, and I hope you rot in hell,” he wrote in the text message. 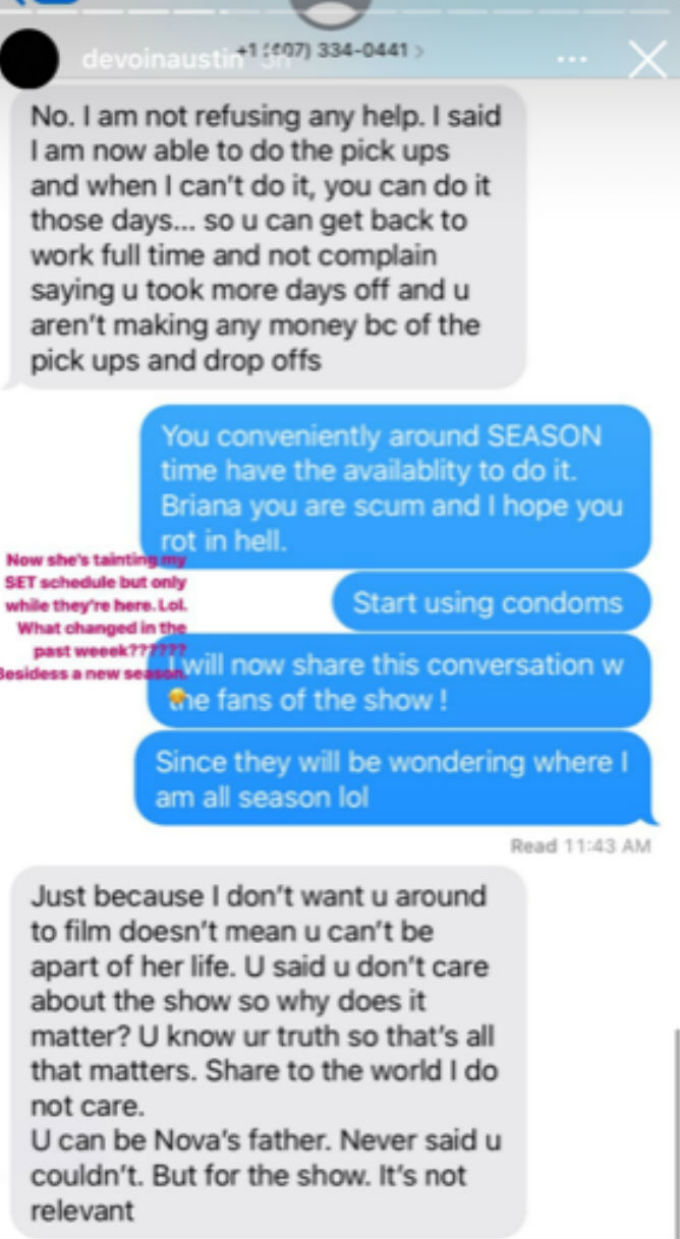 Devoin also told her to use condoms and let her know he was sharing their messages with Teen Mom 2 fans.

Teen Mm 2 filming has sparked another explosive fight between Briana DeJesus and Devoin Austin. He shared their entire exchange on social media, slamming her for changing his schedule with Nova for filming.

It is merely the latest fight between the exes who can’t seem to find common ground even for the sake of their little girl.

What do you think about Devoin sharing private messages with Briana?

END_OF_DOCUMENT_TOKEN_TO_BE_REPLACED

END_OF_DOCUMENT_TOKEN_TO_BE_REPLACED
We and our partners use cookies on this site to improve our service, perform analytics, personalize advertising, measure advertising performance, and remember website preferences.Ok