And the evolution of Christopher Meloni’s Elliot Stabler, “the most pre-Miranda [Rights] cop on television” 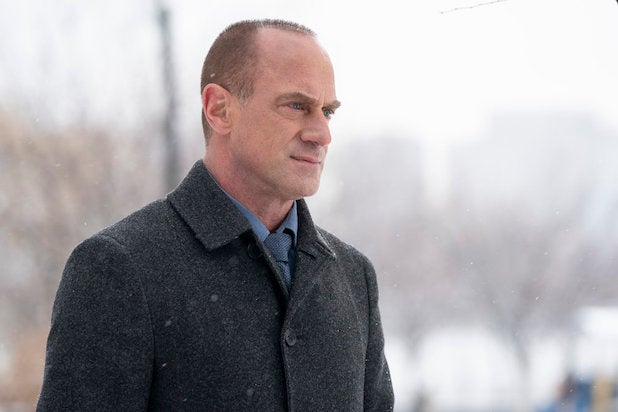 Christopher Meloni returned to the “Law & Order” franchise last week with the big comeback of his character, Elliot Stabler, on “SVU” and the debut of his spinoff series, “Organized Crime.” Both episodes of the two-hour crossover drew 7.6 million total viewers for NBC in Live + Same Day Nielsen ratings, a solid indicator of just how many fans were excited to see Stabler reunite with his old partner, Olivia Benson (Mariska Hargitay) in the first part and strike out on his own mission in the second half. And though the show is only entering week two, series creator Dick Wolf is already looking ahead to what a potential Season 2 could look like.

“The thing that really excites me about the show — and I’m not speaking for Chris, but I think is exciting for him — is that this is the first ‘Law & Order’ with literally a completely different storytelling,” the “Law & Order” mastermind told reporters during a press conference Wednesday. “In a 24-episode season, which you should think next year would be, you should think about the fact that it’s going to be three eight-episode arcs. And the first third of the season is ‘The Godfather,’ the second third is ‘American Gangster’ and the last third is ‘Scarface.’”

He continued: “And these villains are going to be really bad guys that give Chris a constant source of energy, outrage, belief in justice and a different way of pursuing criminals than we’ve had before. You could always say, what are you going to be doing this year?”

Of course, right now we’ve just met the one bad guy, online-pharmaceutical crime boss Richard Wheatley (played by Dylan McDermott), but he’s a very, very bad guy who is set up to be Stabler’s main person of interest in trying to solve the murder of his wife Kathy (Isabel Gillies) which occurred as a twist in last week’s “SVU.”

“This is a very long — but not too long — period to really get inside both your protagonist and your antagonist. And all you have to do is look at the casting of the first episode and realize this is not episodic casting,” Wolf said. “We’re shooting for bigger game. And I think it’s going to be endlessly interesting. And [Stabler] has evolved in some ways that are given a lot more than lip service this last week, and this week. Just think of the challenge, that this gentleman was the most pre-Miranda [Rights] cop on television and he has come back and the adjustments to the new realities that Stabler represents I’m very proud of. And I’m almost afraid to say it, it’s one of the real reasons that I’m glad that [‘Organized Crime’ showrunner Ilene Chaiken] is here because she’s not only an excellent writer, but she’s managed to take a very tough character and make him more sympathetic last week than he’s ever been. You ever think you’d see Stabler cry?”

While “Organized Crime” is deeply connected to “SVU,” having launched out of the show, quite literally, Wolf says you shouldn’t expect a crossover with the parent series every week, even though they air back to back. But that’s not to say there won’t be times when Benson and Stabler cross paths while fighting crime in NYC.

“I certainly think the second episode is hardly ‘SVU’ redux,” Wolf said. “I would say the most accurate measure of how often there will be crossovers and of what depth are the ‘Chicago’ shows. We’re going to do it whenever it gives both shows a different way to shine. And, obviously, there is a portion of the audience that says, ‘Geez, this is frustrating. Why don’t you just put them both on the same show again?’ It’s not exciting. This, to me, is much more engaging.”

Chaiken says she will follow Wolf’s lead on that front, “because it’s a thing that he so intuitively knows how to do.”

“But these two shows exist in the same universe, a fictional, very grounded universe. And we never forget that those other characters and those other stories exist,” the executive producer said. “And when we tell a story about Stabler in Benson’s world or Benson in Stabler’s world and things happen that affect their characters, we don’t just forget about it. So it’s both challenging and tantalizing from the point of view of story writing to make sure that you keep those things alive while the shows have their own identity, each of them.”

As for how “SVU” and “Organized Crime” will deal with the depiction of police officers on screen in the wake of the resurgence of Black Lives Matter protests and increased scrutiny of the procedural genre’s handling of police brutality, Wolf says he stands by his previous remarks that “the shows will speak for themselves.”

“Obviously, the people inside the company, the showrunners, the producers, we spend a lot of time talking about police behavior,” Wolf said. “I would bet to you that probably more time than any other non-law enforcement people in the country, because it’s what we do every day. And I made a statement when everything erupted in the spring and early summer, that somebody said, ‘What are you going to change?’ And I said, we’re doing what we always do, which is listen very carefully, read virtually everything written about this from both sides of the spectrum, from the Far Left to the Far Right. And what I said in the spring still holds, the shows will speak for themselves.”

He added: “If you’ve been watching ‘Chicago PD,’ the question is asked and answered. Of course, we deal with what’s going on, but it’s never in a knee-jerk way. That ‘Law & Order’ for years, that people say, there’s no character in it, I say there’s a lot of character in it. If you’re a regular viewer, you know surprisingly huge personal dossiers on all six of the regulars. But we don’t dole it out with soup ladles, we ladle it out with demitasse spoons because that’s the way that life is. Nobody gets a job and walks in and says, here’s my resume for the last five years.”

Wolf then pointed out that in Stabler’s return to “SVU,” he rolled up his sleeves when entering an interrogation room to get into a heated conversation with a suspect in the car bombing that led to his wife’s death. The fact that Stabler did not hit the man, but that many fans probably thought he would — because the old Stabler would — is “pretty cool” to Wolf.

“When he walked into the interrogation room and rolled up his sleeve, I don’t think that was in the script. It’s an instinct that’s like, I hate to say it, but it peacocks nostalgia there for sexual display. It’s literally, is this big enough? He rolls up his sleeve, 80% of the audience, I am sure, thought he was going to punch the guy. That’s pretty cool.”