Romance is finally on the menu for the scheming butler Thomas Barrow (Robert James-Collier) in Julian Fellowes’ “Downton Abbey” film, a follow-up to the Emmy-winning TV series. But given the 1920s time period, his same-sex relationship won’t be without its obstacles. Director Michael Engler spoke to IndieWire about Thomas’ promising romance, and the realities the filmmakers had to face in giving him even that much happiness.

“First of all, [Julian Fellowes] always wanted it to feel authentic, that even if we were creating an opportunity for Thomas like one he hadn’t had before – more romantic and a bit of an awakening – that we didn’t also soft-pedal it, that we make sure that the rough parts of it felt rough,” said Engler.

Engler had directed several episodes of the original series, including the series finale Christmas special that ended on an optimistic note for most of the characters. At the time, fans were satisfied that the former footman had finally achieved his highest attainable rank as a servant at Downton: butler. It seemed that was Thomas’ best chance at happiness as a closeted gay man in 1920s England. After all, he hadn’t had much luck in love in the past, and homosexuality was deemed a crime at the time.

In the film, Thomas steps aside when Lady Mary (Michelle Dockery) asks former Downton butler Mr. Carson (Jim Carter) to resume his old role for the duration of the royal visit from the King and Queen of England. Left to his own devices, Thomas starts hanging out with one of the royal servants and eventually stumbles upon an underground gay nightclub full of men dancing, laughing, and drinking. The experience is almost too good to be true, and reality intrudes when the bar is raided. Thomas lands in jail.

“In depicting that world, that gathering that he goes to, we had to find a way to tell it that didn’t feel anachronistic even though there’s almost no research that one could actually do about a place like that because there was no gay bars in York in 1927,” said Engler.

Although there were records of establishments in London where gay men could gather, those were primarily for procuring sex partners.

“We didn’t want it to be that kind of thing even though those existed. This wasn’t portrayed as fundamentally a kind of sexual den, but a place of brotherhood, and camaraderie, and playfulness, and a place where people could let down their hair and just enjoy themselves,” said Engler. “And that was important to us, to portray it that way, with more of a warmth to it and a friendship. So we just modeled it on other kinds of places, like early jazz dens, where people would meet in those places and just applied it to this. ‘What would it be like in York?’”

For storytelling purposes, they settled on having it be a club that would use pre-existing establishments for the fun. Thomas ends up at a place called Turton’s, which is a warehouse converted into a club.

“They didn’t really have a place of their own, so we decided [it] was a warehouse that somebody had keys to or access to let people in. It would be a pop-up club that would leave no trace behind because that’s all you really could have there,” he said.

Fellowes and Engler also envisioned this as a more inclusive club.

“We did have the idea that, first of all, it would be men of every social class and age because anybody at all who might be seeking a gathering like that would be open to it and to each other,” said Engler. “It’s not like today, where it’s such a part of society. There’s people of color gay bars, and there’s guys who go to the gym and are muscle-y gay bars. And there’s a million different kinds of things for people to find the specific versions of what they relate to. But here, we wanted to make sure that it was clear that it was working-class men and gentlemen together.”

Despite the raid, Thomas is released from jail thanks to his new friend, the royal valet Mr. Richard Ellis (Max Brown), who had seen him being apprehended. Using his royal-adjacent privilege, he intimidates the police into letting Thomas go. 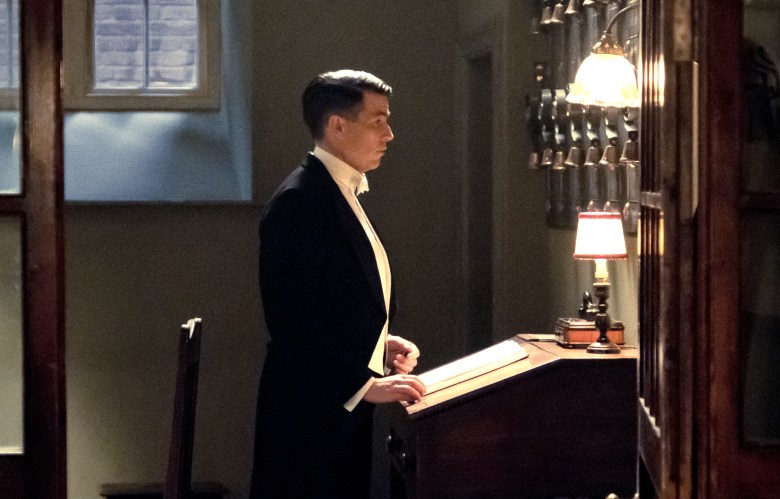 Later, when the royal retinue is about to take their leave of Downton, Richard reveals that he’s also gay and hopes Thomas will stay in touch. The underbutler Andy (Michael Fox) sticks his head in the room briefly to notify them of the impending departure. After glancing in the hallway to make sure no one’s looking, Richard leans in for a kiss that’s quick, but full of promise.

Although the actors knew the general outline of the scene, Engler didn’t give them other details, such as when they’d get interrupted or how the kiss should play out. This was designed to first demonstrate how Thomas is surprised by this sudden offer or romance, but also how the relationship is still brand new, with both parties somewhat uncertain how to proceed.

Similarly, there were no runthroughs for the kiss itself, even though its importance could not be understated. A romance for Thomas was front-and-center in this teaser that features the big moment.

“I always think it’s not a good idea to ever rehearse a first kiss. The only time I have done that on film is when I have a young person who’s underage because I feel like there’s a way in which you have to take the curse of it, or the energy around it, away, by not having it be the first time in front of everybody and all that,” he said.

In the real world, both actors are straight married men with families, but in a way, Engler thought that this could play well for the time period. Since Thomas and Richard are closeted, their opportunities of romance were rarer.

“The actors haven’t kissed a lot of men, and I think they appreciated that idea, that, ‘Oh, even if this is what those guys really were craving, they wouldn’t have done it that many times. There’s a decent chance, anyway.”

Even with the kiss, it’s still a bittersweet ending for Thomas. Even if the relationship works out, they most likely couldn’t go out as a couple, not to mention how their respective jobs and responsibilities would keep them apart most of the time. But even these brief snatches of joy are better than the alternative.

“The reality is if Thomas were arrested and that thing got out, he would lose his job, not get a recommendation, and essentially have to move and start over with a whole new life,” said Engler. “And so, we wanted to make sure that the dark underside of it wasn’t glossed over in the midst of this kind of rare moment of connection that he does have, that he never really got to have in the series.”

The “Downton Abbey” movie is currently in theaters.