Downton’s a family affair: In conversation with the stars of the hit TV and film saga

I met creator Lord Julian Fellowes and stars Jim Carter and Phyllis Logan (Carson and Mrs Hughes), plus Sophie McShera and Michael Fox (Daisy and Andy) to discuss the phenomenon – and what comes next.

“Well, I hear we’re the Avengers of period drama,” says Jim in that fabulous baritone. “And we knocked out Rambo. Boom!” He loudly smacks a fist into his palm with satisfaction.

Did they ever in a million years see this coming?

“I haven’t quite been around for that long,” Jim growls. “But no. The first series took us by surprise and the rest has amazed and delighted us. When the series finished we thought, ‘That was lovely, thanks’. But it wouldn’t go away. Every question afterwards was always about a film.”

“I thought it was over,” admits Julian, 70. “And suddenly here we are again. It’s extraordinary.”

Inevitably, after such box office success, there is already word that a sequel is in motion – and Jim Carter knows exactly how it should start. 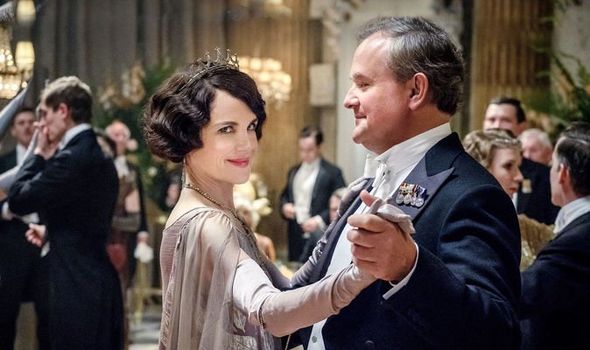 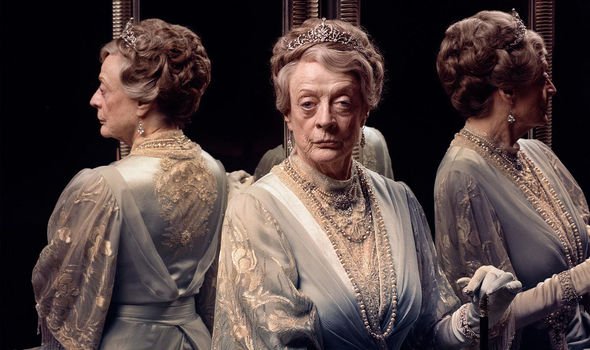 “You see all the family on the drive, dressed in black and then cut to 12 gravestones,” he says, adding: “You need a bit of tragedy to spice it up.”

Twelve? Who would be left?

“It depends who’s available,” laughs Phyllis, 63. “But of course we’d all be delighted to return. We always tell the youngsters it’s never like this on any other show. Savour it. This is special, this sense that we are all a family.”

Of course, their “family” has always been generously garnished with guest stars. Who would they like to see in the next film?

“Och, I’ve already had mine,” sighs Phyllis, “when George Clooney did the Comic Relief special. He was so handsome and polite and charming.” 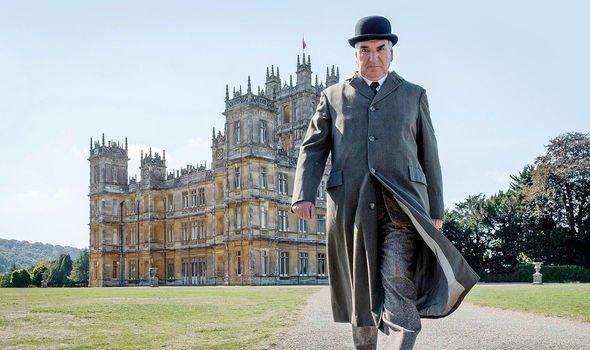 “He was everything you could want,” adds Jim, 71. “He even hung around and played Bananagrams with us – it’s what we do when we’re bored with gossiping. Perhaps I can persuade him to come back as Carson’s long-lost son. Or Anthony Hopkins as an under-gardener…”

“We’ll need some guest stars for Daisy and Andy’s marriage,” says Sophie, 35. “We want Kathy Burke to play his mum.”

Will the marriage even happen? I ask, gently pointing out that Daisy can be a little fickle.

“How rude. Thanks,” Michael groans.

Daisy has become impressively stroppy and contrary over the years. Is that from Sophie? 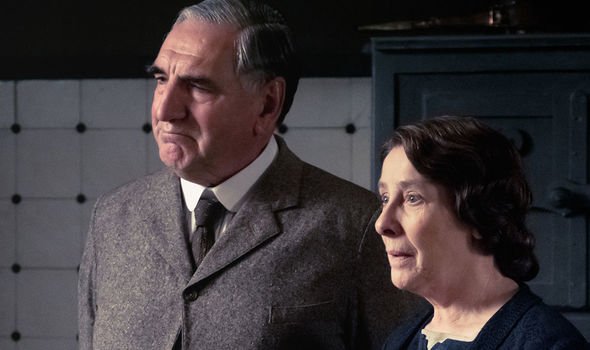 “It might be,” she laughs. “She wasn’t a major character in the beginning so maybe I’ve brought in all the huffing and eye-rolling.”

I can’t resist wondering if Julian has a favourite character. “It’s like asking someone who’s their favourite child,” he says. “They protest but, of course, they secretly do. I hear my father in Robert, Lord Grantham. My father was more intelligent but they’re similar in their moral stand. They’re both decent men doing their best but neither questions the moral world in which they exist. Robert doesn’t wake up one morning and think ‘Why am I the seventh Earl of Grantham?’ he just thinks, ‘What’s for breakfast?’”

Even so, I wonder how the indomitable Carson and Mrs Hughes would put the world to rights today.

“We’d have to invent a time machine,” growls Jim, “And go back and say to David Cameron, ‘What are you doing, you clown?’” 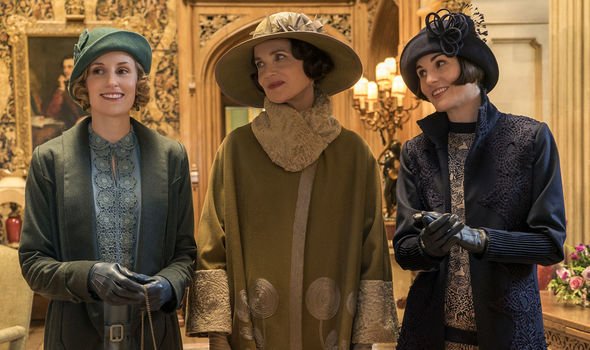 Who is most unlike their character, I wonder? They all nominate Rob James-Collier who plays the eternally unhappy Mr Barrow. “He’s happy and married with a couple of kids,” says Jim. “He’s got four!” Phyllis reminds him “You forgot the twins.”

“Every prank on set usually involves Rob,” Sophie adds. “But Jim really is like the daddy. He looks after everyone.”

Sometimes the laughter spills over into filming, of course. One scene in the film sees poor Mr Molesley make a fool of himself serving the Royal Family – and then curtsey in embarrassment.

“We were all in hysterics and had to be po-faced,” grins Michael. “The producers and cameramen were shaking with laughter. But he won’t tell us what Maggie Smith whispered in his ear afterwards. Apparently it was something lovely.”

And what is it like casually sharing the day with the Dame? 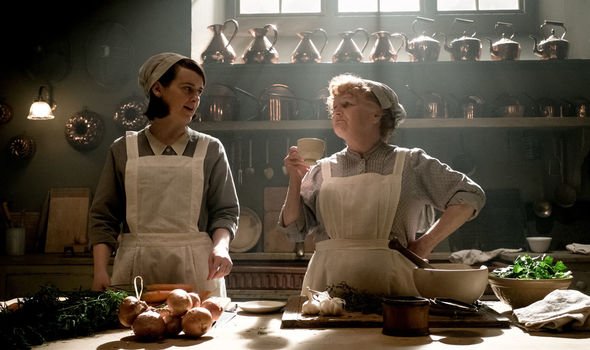 “It’s amazing,” Michael says. “She starts talking about Olivier, Burton and Gielgud. You can’t fathom how influential and iconic she is – but she never takes herself seriously.”

“She is so funny,” Sophie adds. “Her one-liners are as good as the Dowager’s. She’s very quick.”

Highclere Castle famously stands in for Downton Abbey – but that’s only “upstairs”. In the film, all the kitchen and servants’ quarters scenes were shot at Shepperton Studios. “I didn’t go to Highclere once,” sighs Sophie.

Michael and Jim, meanwhile, were dashing between the two. Every time someone goes into the main house it appears seamless but was actually shot days apart. “I’d go out one door and appear in another room two weeks later,” says Michael. “And try to remember what I’m doing with the tray!”

Of course everything about Downton is an illusion, a cosy, rose-tinted view of the past. Should we even idealise a show where everyone is so firmly in their place? 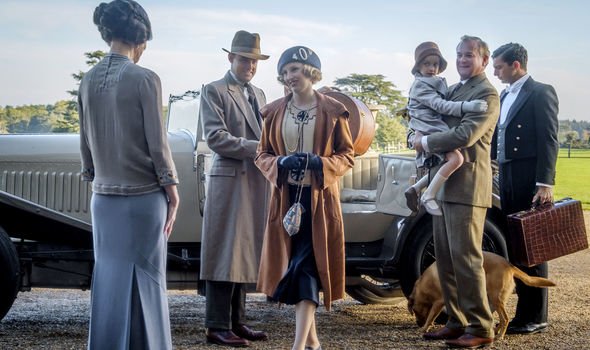 “Julian has written one specific family,” says Michael. “It’s escapism. Hillary Clinton binge-watched it to get over the shock of losing the presidential election. But I think people respond to his view that the family has a a sense of duty. We all relate to being part of something bigger.”

“There is a lot of unpleasantness on screen today, golly,” adds Julian. “You’re watching people you’d run a mile from rather than have dinner with. Not that I’m against any kind of show – good luck to them if they can find an audience. But I think we are warmer than most. Most of the characters, not quite all, are pretty decent people.”

Rather indecently, I finish by asking whether Carson and Hughes share a full “physical” relationship.

“Do you really want to go there with your fevered imagination?” Jim booms. “Carson was most concerned about his conjugal rights but I think we should probably draw a veil over it.”

He pauses and then, with true Downton timing adds: “I like to think they spoon.”