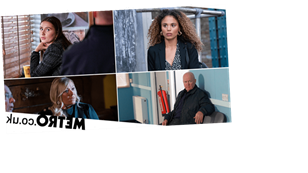 It’s been a long time coming but EastEnders is back with a bang – and we have all of the spoilers you could possibly need.

With a huge revelation for Sharon Mitchell (Letitia Dean), a major mission for Chantelle Atkins (Jessica Plummer) and a major decision of loyalty for Callum Highway (Tony Clay) – it’s an action packed comeback.

Ian is happy with the fresh start at the Queen Vic as the investigation into the boat crash concludes but memories of losing Dennis leaves Sharon distraught. Ian feels guilty about what she is going through.

Dotty’s court hearing arrives and she reaches an agreement with Ian to drop the charges if she keeps quiet about Dennis. Later, she is later riled by him and storms into the Queen Vic – telling Sharon that Ian is the cause of Dennis’ death.

Chantelle decides that it’s time to leave Gray and seeks out a divorce lawyer but she is crestfallen to learn the price. Gray installs a tracking app on Chantelle’s phone and takes her credit card. Chantelle asks Kheerat is she can borrow money, unaware that he is struggling himself.

Ben’s cochlear implant switch on goes ahead and Callum doesn’t want to miss it for the world. Ben plans to present Callum with a key to the Mitchell house. Callum trawls CCTV from the warehouse job at work and is shocked to recognise Ben – Callum’s boss’ new target is Danny and he tasks Callum with finding out more information, leaving him with a dilemma.

Ruby and Martin ignore Kat’s snarky comments about their relationship but soon Ruby learns that someone has stolen identity and is making outlandish purchases. She doesn’t tell Martin, vowing to handle it herself.

Linda’s working at the launderette but Mick is struggling to find a job while trading standards check on Kheerat. Suki reveals that it was Gray who reported them, urging that he cuts ties with Chantelle.

Sharon is stunned as Ian tries to defend himself against Dotty’s accusations. But who will Sharon believe?

Kheerat gives Chantelle some money and demands what it’s for and she admits it’s for a divorce – and they share a moment. But Kheerat’s money troubles worsen.

Kathy mentions money problems which piques Peter’s interest. Bobby also mentions that the restaurant is strained with Max not pulling his weight. Max tells Kathy that he sold his half of the restaurant to Ian. Kathy warns Ian that when Max finds out that he used the money to buy Sharon the Vic, he won’t be pleased.

Gray spots a pop up advert for divorce lawyers on the laptop. At the hospital, Ben wonders where Callum is. Callum is busy stopping his boss from enhancing the grainy image but he arrives at the hospital just in time.

Ruby is battling with the bank over the fraud. When asked about the club opening, Ruby is uncertain but Vinny has a risky idea. Habiba and Jags continue to date in secret and he admits he wants to tell Suki – Iqra interrupts and Habiba makes excuses, leaving Jags hurt.

Gray leaves for work and Chantelle sets her escape plan into motion to get away with the kids – but is he onto her?

Ruby tells Vinny that she is in on his plan – she tells him that she will be out of the club. She soon has a change of heart – but it’s too late. Vinny breaks into the club and Martin chases him – with violent consequences.

Mick tells Tina that he is desperate for work so she offers him a job at The Albert. Kathy shows Frankie around and Tina and Kathy clas h but Mick bows out, leaving the job for Frankie. Tina is unimpressed.

Ben is upset that Callum is distracted and knows something is up. He later tells Ben they are looking into Danny but when Ben lies, Callum storms off. When Ben realises what is up with Callum, Callum demands the truth but will Ben open up?

Vinny calls Jags for help after the incident. Suki turns up and demands that he leaves – but what is she planning?

Ben is stressed about the situation and promises Callum that he never wanted to put him in this position.

Mick tells Linda that he let Frankie have the job. Linda tells him that the money from the pub won’t last forever. Tina puts Frankie through her paces – but she impresses her.

END_OF_DOCUMENT_TOKEN_TO_BE_REPLACED

END_OF_DOCUMENT_TOKEN_TO_BE_REPLACED
We and our partners use cookies on this site to improve our service, perform analytics, personalize advertising, measure advertising performance, and remember website preferences.Ok