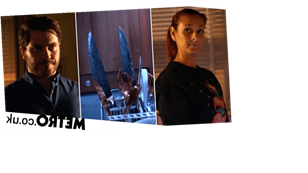 Tina Carter (Luisa Bradshaw-White) has sensed fully how much danger Gray Atkins (Toby Alexander-Smith) can be and as Christmas night drew to a close in EastEnders, his words carried a thinly veiled note of threat.

With prison hanging over her, Tina was trying to put her feelings of ill ease about Gray behind her and focus on Christmas and she delighted Shirley (Linda Henry) by bringing Mick (Danny Dyer) over for dinner with Ollie.

Gray seemed less than impressed that Tina was taking over the house and he made several digs about her being messy.

As Shirley soaked in the situation of spending the Christmas with Mick, Tina and Ollie, she was oblivious to how much resentment was building in Gray towards Tina – and viewers know he recently sabotaged her case, leaving her number one suspect in Ian Beale’s (Adam Woodyatt) attack.

To try and ease Gray’s mood, Tina made an effort of clearing up the kitchen at the end of the night and she urged him to put his feet up and relax.

But she was chilled when he simply said that she had the knives in the dishwasher the wrong way – they should be pointing up.

Fans know that the knives in the dishwasher were what killed Chantelle and it was a chilling moment to see him refer to that in such a cold and detached way.

As Tina turned the knives round, Gray looked at the scene darkly while Tina was clearly on edge.

Will she work out the truth about what truly happened to Chantelle?

END_OF_DOCUMENT_TOKEN_TO_BE_REPLACED

END_OF_DOCUMENT_TOKEN_TO_BE_REPLACED
We and our partners use cookies on this site to improve our service, perform analytics, personalize advertising, measure advertising performance, and remember website preferences.Ok