Chantelle Atkins (played by Jessica Plummer) and Gray Atkins (Toby Alexander-Smith) have just returned from their second honeymoon on EastEnders after renewing their vows following the businessman’s promise he’ll get a hold on his temper. However, Gray soon reverted back to past behaviour on the BBC soap and attacked Chantelle when he grew jealous but the husband’s violent secret may be exposed very soon.

Karen Taylor (Lorraine Stanley) never particularly warmed to Gray but was overjoyed when her daughter revealed her plans to renew her wedding vows.

However, the matriarch has no idea Gray has been abusing her daughter despite his numerous reassurances he’ll change.

In tonight’s episode of the BBC soap (January 7), Chantelle and Gray returned from their holiday.

Determined to expand their family, Gray bought Chantelle a pregnancy trip but on his travels spotted his wife chatting to Jags Panesar (Amar Adita). 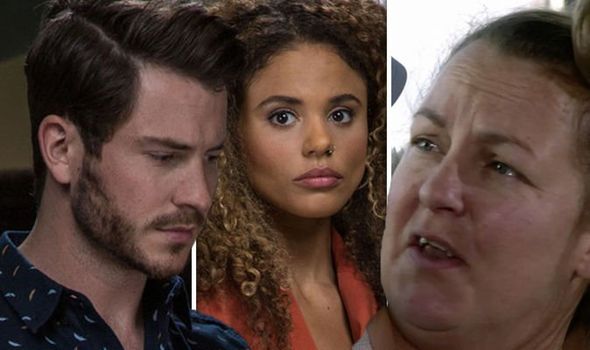 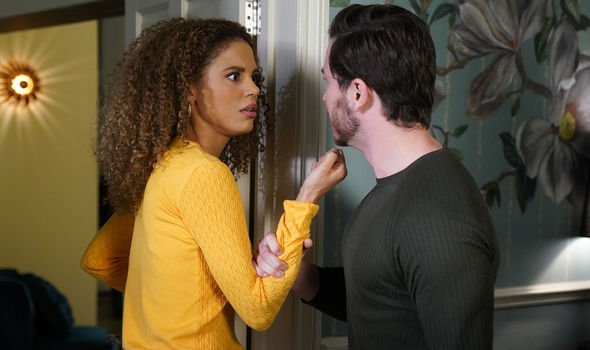 Gray quizzed his wife on the encounter but he wasn’t satisfied with her explanation that she was catching up with an old friend.

When Chantelle confirmed she wasn’t pregnant, Gray’s temper flared and he pushed her up against a wall demanding to know why she wasn’t disappointed at the news.

Chantelle tried to escape but Gray tightened his grip breaking her wrist in the process.

As the pair got ready to leave for the hospital, Karen walked in and quizzed her daughter on the injury. 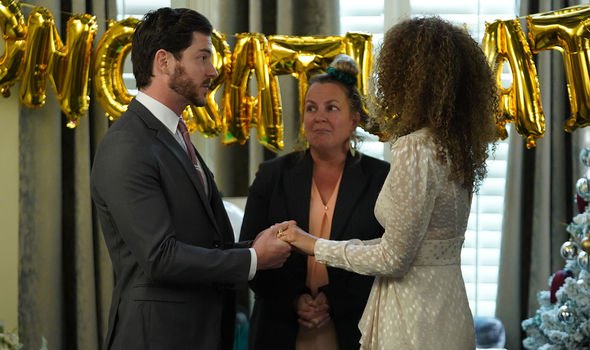 “I think I might have broken my arm,” Chantelle revealed.

“Oh no, how?” questioned the concerned mother.

Lying to protect Gray, Chantelle said: “Tripped on the bottom of the stairs.”

Karen remarked: “Oh Chantelle you poor thing you go the hospital I’ll get him to bed and Bernie can bring Mia over when she’s ready.”

Talking to Gray after they had left, Chantelle explained: “It wasn’t a lie really I mean we were at the bottom of the stairs and I did pull away weirdly.

“You wasn’t to know what I was going to do it It’s my fault really.

“I can do some stupid things when it comes to us can’t I?” she added. “When I get emotional.”

Even though Chantelle convinced Gray she didn’t blame him for the injury, could she have left a clue so her mum realises what really happened?

Tripping on stairs may sound plausible but Karen is very switched on when it comes to her children.

Chantelle may have panicked when Karen asked how she got her broken arm or she may have realised her mum would be able to tell if she wasn’t telling the truth.

After looking after the house when the couple were away, Karen would be aware of any safety hazards and may suspect Chantelle is lying.

Will Karen realise something isn’t right with her daughter and suspect foul play?

EastEnders continues Thursday on BBC One at 7:30pm.