Ejected Survivor Castaway Details Her Biggest Mistake of the Game

Warning: This post contains spoilers from Wednesday’s episode of Survivor.

Future Survivor players: Be careful who you call your No. 1, because when he or she tells your other No. 1 that you’re trying to oust your other-other No. 1, it’s probably all gonna blow up in your face.

Sound messy? It was. And after sharing a bit too much information with her (sorry) No. 1 Tori, Swati Goel lost the trust of her tribe and was ultimately sent packing for Ponderosa. Once again, the Shot in the Dark was deemed just as eyeroll-worthy as the Medallion of Power. (Read our full recap here.)

But as Goel confirms to TVLine, she was playing the same game and making the same promises as the rest of her Ika tribe. But what didn’t we see in the episode, and would she actually have tried to pull the trigger on the Drea plan? Below, the Ivy league student breaks down all of the chaos that led to her demise.

TVLINE | How are you feeling about how Tribal went down in last night’s episode?
SWATI GOEL | I’m feeling good! I thought the way they edited it was super funny. It was cool to watch. I watched it with a bunch of college students in this [dorm] room and it was a fun experience.

TVLINE | I want to ask you about your tweet. It’s a picture of Tori and you wrote: “Gaslight. Gatekeep. Girlboss.” Did that stem from respecting her game or were you trying to throw shade?
This is so funny. The words that are being said are words that I said, so I didn’t mean to throw shade at her. I had a math piece that was due, so I didn’t want to spend my entire life trying to find the right GIF. I didn’t mean anything by it!

TVLINE | OK, cool. I read into that a little too much then.
I think everybody did. [Laughs] Maybe I should change that.

TVLINE | Was Tori truly your No. 1 out on the island? Did you have any doubts with her prior to losing that immunity challenge?
Yeah, so me and Tori had a little bit more tension even before the immunity challenge. I would say I got a lot closer with Rocks, especially after the first few days. But I was definitely working most closely with one of those two, and those were the two people I really wanted to work with moving forward. Unfortunately, they didn’t get along! [Laughs] 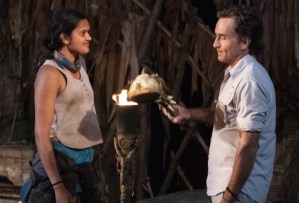 TVLINE | How much of your Drea plan was about making a big move in the game, and how much of it was about trying to save Tori? What was the thinking behind it?
It was partially about trying to save my ally — and it’s definitely not a move I would make again. I think it would’ve been far better to keep my head down and let things happen. I was also more contemplating making the move more than I was actually like, “I should do this.”

I think the mistake I made was telling Tori too soon. The idea came into my head and I told her, and there was really no reason to say it right then. It wasn’t about wanting to make a big move. I realized rewatching, Drea and Romeo were actually wanting to work with me, but the way it appeared to me was that Drea was sort of flip-flopping between who she wanted out. She would say she wanted Tori out, then she would say she wanted Rocksroy out, and then she would talk to me about me, her and Tori doing an all-girls alliance. So I think she just felt very in control of the tribe, and kept changing her mind of who she wanted to work with outside of Romeo. If we lose again after Tori gets voted out, then I’m pretty freakin’ confident it’s gonna be me, and there will be nothing I can do about it at that point. So I had the conversation with Tori to sow the seeds if I wanted to [vote out Drea] in the future, and I think I said just a little bit too much and precipitated a little bit more… a lot more than I wanted to.

TVLINE | Now, had you not drummed up the idea of blindsiding Drea, would the group have rallied around voting Tori out?
I’m not sure. I’m really not sure. To be honest, I can very easily see an outcome where Rocks gets voted out. There was this sense on Ika of, “We’re losing, we’re losing, why are we losing?” So I think me getting voted out in hindsight was probably not a likely outcome, but in the moment it felt like it would’ve been a likely outcome.

TVLINE | We saw you tell everybody out there that they were your No. 1. Did you even think about the possibility of everyone comparing notes?
OK, in my defense though, a lot of the people who I told they were my No. 1… it was in response to them saying the same thing to me. Rocksroy had been telling me I was his No. 1 since Day 1. I think Drea had literally just said something like, “You’re my No. 1,” right before that clip that was shown. In no way am I bitter about the editing. I thought it was super funny and was super accurate to how I was playing, but it was also how everybody else was playing… or [at least] how three-fifths of the tribe was playing. 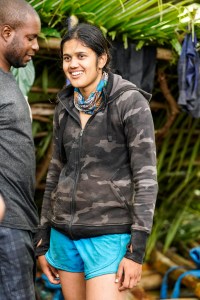 TVLINE | Was there much talk in your tribe about “Goliath” Jonathan? Specifically, was there any talk about trying to get him out ASAP come the merge?
It was like, “Yeah, at the merge, we’re going to vote for Jonathan.” There was definitely a sense of like, “Who is this guy?” and very much a sense of injustice and ill will towards this man. [Laughs]

TVLINE | Did you think Taku was going to win every challenge from there on out?
No, no, no. We hadn’t given up in that sense. At every challenge, we were like, “No, we’re going to get this. We’re going to turn this around. They have Jonathan, but we have all of us!” So, I don’t think there was a sense of giving up, but every time we lost we talked about why.

TVLINE | Now, we’ve seen Maryanne blab on about bunnies in mailboxes or whatever. What was your tribe’s reaction to her secret phrase and did you think that nonsense meant anything?
We literally didn’t even register it. It wasn’t even a conversation. We hadn’t seen Season 41, so there was no reason to think, “Oh my gosh, this is somebody talking about the idol,” you know what I mean?

TVLINE | How about the fact that she repeated the same thing at two different challenges. Zero red flags?
No. Not at all. I did not register this. At. All. [Laughs]

TVLINE | Rocksroy said some kind words at Tribal Council about you coming out of your shell. How has the Survivor experience changed your life and what have you taken away from it that you’ll carry forward with you?
I think it’s affected my life positively. I had this huge dream and I knew that I wanted to apply to be on Survivor, and I got so lucky that it worked out before I even turned 20. I learned a lot about myself in the process. There are so few times where you see yourself under that much of a microscope and under that set of intense circumstances, and I feel like it was a very valuable opportunity to learn and grow. That’s a nice silver lining, because people had mentioned that that would maybe happen, but I didn’t really take them seriously. It was all about trying to win, you know? So it’s nice that it happened.