Survivors and loved ones share painful memories, and many of them advocate for the killer’s repentance 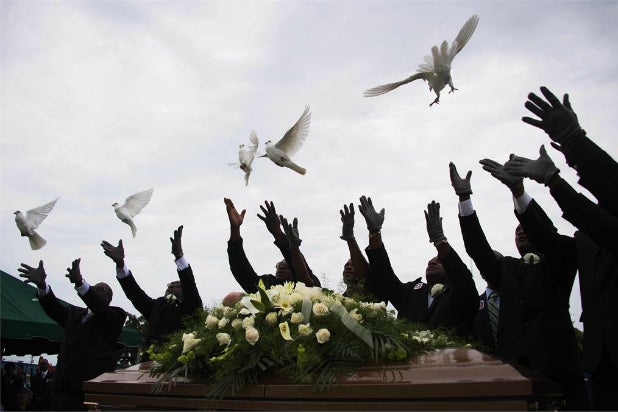 On June 17, 2015, a stranger walked into Emanuel AME church and found a Bible study in progress. They invited him to join them, but instead, Dylann Roof opened fire, killing nine Black parishioners in the process. Written and directed by Brian Ivie, the documentary “Emanuel” revisits that terrible day with the families of those who were taken so soon, so violently.

The film introduces the audience to Nadine as she’s preparing a sweet-potato pie and reminiscing about her mother, who was one of the nine members of the church not to return home that night. Next is Anthony, a pastor whose wife was also killed in the massacre. Chris, a baseball player on the rise, remembers his mother. More faces, more stories roll in, and the enormity of the losses feel bigger and bigger. It wasn’t just the victims and their immediate families who were affected, but their entire community as well.

Piecing together memories of that day, “Emanuel” reconstructs the harrowing moments of the shooting with the help of newscasts and security footage. Journalists remember their first impressions of what they saw when they arrived on the scene, Charleston mayor Joe Riley remembers the phone call bringing him the terrible news. One of the survivors, Felicia, remembers watching her son die at the hands of the shooter while hiding under a table. Another survivor at the church, Polly, made the 911 call after the shooter spared her so she could tell what happened that night.

Nikki Haley (then the governor of South Carolina) makes a brief cameo, which speaks to the documentary’s attempt to bridge both sides of the political aisle, since it also includes excerpts of President Obama’s eulogy.

Collecting the stories of loved ones and survivors provides just some of the film’s most effective moments. Early on, “Emanuel” traces this modern-day event to the history of slavery in Charleston and the start of independent Black churches and their subsequent targeting by white supremacists and racists. Charleston was once the port of entry of generations of Black slaves, and Emanuel Church was one of the first major African Methodist Episcopal churches in the country.

Mayor Riley, Pastor Joseph Darby, professor Dr. Bernard Powers, and journalists Herb Frazier, Jennifer Hawes and Glenn Smith connect these various pieces of history to unpack the historical precedents leading up to the attack on a Black church and the not-so-distant memories the shooting unearthed.

“Emanuel” is a documentary with many purposes. It is a tribute to those who lost loved ones in the church, and it provides an understanding of the significance behind the event. But it’s also a movie with a message, one that emphasizes some survivors and family members’ willingness to forgive Roof just mere days after he walked into their church.

The documentary includes some dissenting opinions and a few congregants who are not yet ready to forgive, but for the most part, the movie’s focus shifts to faith and forgiveness. In a courtroom scene where the families were able to address the shooter via video, Nadine tearfully forgives him, and Pastor Anthony encourages him to repent.

Director Ivie, one of the co-founders of Arbella Studios, focuses on faith and social justice, and “Emanuel” perhaps best embodies those two tenets without seeming like it’s proselytizing. But the movie is strongest when it just lets its subjects talk with no agenda at hand.