Emmerdale spoilers: Cain Dingle to cheat on Moira as he leaves village with unlikely ally?

Emmerdale aired a week of explosive episodes last week which saw Moira Barton (played by Natalie J. Robb) and Nate Robinson’s (Jurell Carter) affair revealed to Cain Dingle (Jeff Hordley). But in a twist no viewer expected, Nate explained why he had targeted the farm owner to have a fling with; to get revenge on Cain because he was his biological son. Understandably, Cain was furious with his wife’s betrayal but it seems he is going to develop an unlikely ally in upcoming scenes who he will leave the village is. Is this the start of a new romance for the mechanic?

Earlier this week, the Dingle family members gathered in the Woolpack to raise a glass and welcome baby Eve Teddy Dingle into the world after Chas Dingle (Lucy Pargeter) gave birth to her in the gentleman’s toilets.

Amongst them was Amy Wyatt (Natalie Ann Jamieson), who was disgusted when she found out her son’s stepmother had been sleeping with her former boyfriend.

But it seems she could become instrumental in Cain’s next movement and the pair’s former romance may spark up again.

When Chas asked if Cain was ok, he replied: “Not really, no. 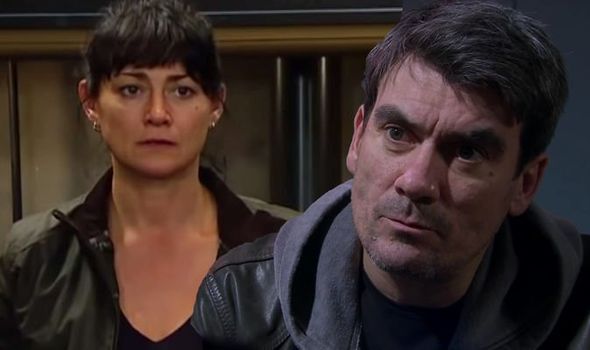 “What you doing here?” Cain directed his question at Moira. “I take it you’ve not brought them up to speed then? So, it turns out you know Nate, our farmhand, he’s my biological son.

“Here’s a question for you Moira, if you’d have know who Nate really was, would you have still slept with him?”

“She did what?” Amy piped up and exclaimed. “You slept with Nate? He was my fella!”

Amy then tried to lurch forward and attack Moira but was stopped by her mother Kerry Wyatt (Laura Norton) and dragged outside. 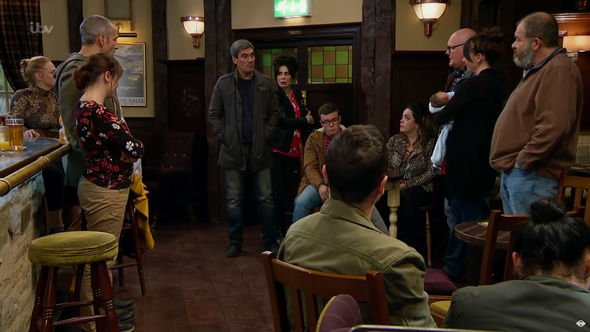 But that didn’t stop Amy visiting the farm the next day to find out where her son Kyle was staying and who he was being looked after by.

“Where’s Kyle? I’m not interested in whatever excuse you’re going to come up with, I just want to know where my son is,” she told Moira.

After explaining how the young boy was staying at Wishing Well Cottage, Amy added: “Is that where he’s going to be living from now on? It would be better than him hanging around this freak show.

“Do you expect us to feel sorry for you?” She shouted at Moira. 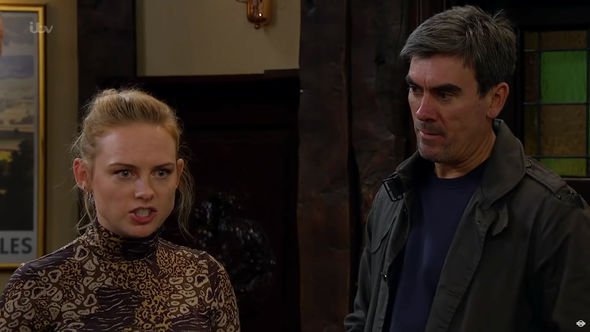 “You pretended to be my friend! You were supposed to be looking after my son but instead you were off having cougar action with my boyfriend.

“It’s not alright. He’s Kyle’s brother! You should be ashamed of yourself.” And with that she turned on her heel and left.

This week, ITV viewers will tune in and see Cain hit the bottle as he tries to adjust to the life-changing news.

In an usual conversation, Cain tells Amy he doesn’t want his wife to be involved in Kyle’s life anymore.

Of course, Amy is more than happy to oblige, but she does raise concern over the amount of alcohol Cain is consuming and how it may affect their son.

In a last ditch attempt to help Cain, Amy suggests he goes away with her and Kyle for a mini break.

Will romance strike between them?

After much persuasion, he finally agrees and Moira is left distraught that her husband is leaving with his ex.

But will spending time away from the village and all the drama allow Cain to make up his mind about his future and whether or not Moira will be in it?