Last night’s instalment of the ITV soap saw Sarah Sugden (played by Katie Hill) put in place a plan of action to try and find the location of Vanessa Woodfield’s (Michelle Hardwick) son’s father, Kirin Kotecha (Adam Fielding). But with Sarah’s future plunged into jeopardy after Priya Sharma (Fiona Wade) catches her stealing her phone next week, will Charity Dingle (Emma Atkins) be forced to take matters into her own hands in a new sinister twist?

Viewers have seen Vanessa absent from the Dales in recent weeks after her fiancée Charity announced she had gone to stay with her mum.

The vet is currently undergoing treatment for bowel cancer and has been struggling to deal with the impact it is having on her life.

One such way is her ability to look after her young son Johnny, whose father Kirin hasn’t been seen in Emmerdale since 2016.

However, with the search underway to try and locate him, it looks as though Charity may end up making a huge error next week as the mission continues. 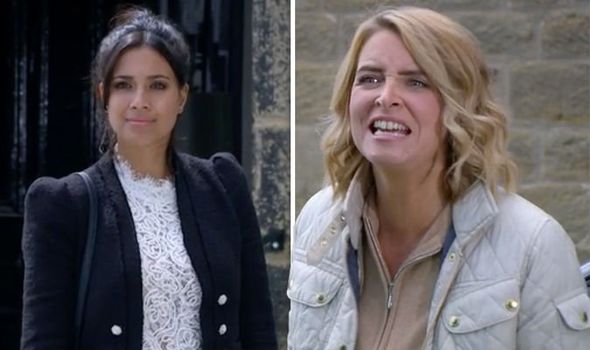 Last night’s episode saw a new development to the storyline after typically rebellious Sarah decided to take matters into her own hands.

Sarah was seen snatching a ring and gold bracelet from Priya’s home in an attempt to fund a private investigator.

However, an official soap preview clip ahead of Monday night’s instalment shows Sarah and Charity getting caught by Priya as they attempt to flee the house.

But could the duo have found some secret information about Priya they could use against her in order to find out Kirin’s true location? 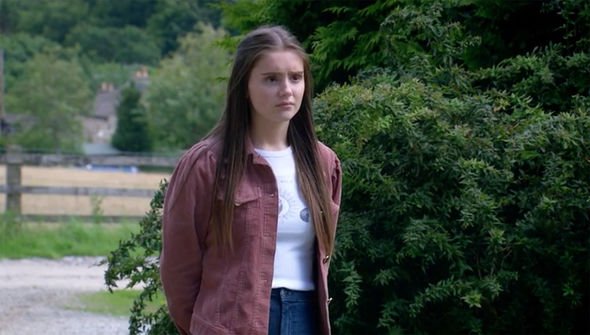 Could Sarah have already found new information on Priya’s phone, which could lead them directly to Kirin?

However, as the pair make a run for it, Charity soon reverses her decision, telling Sarah: “Babe, just give it up will you?”

“You, you put her up to this?” snaps Priya, appearing surprised by Charity’s involvement.

But Charity hits back, saying: “No, of course I didn’t! Do I look like Fagan?”

“Then why are you trying to break into my car?” asks Priya.

Charity insists: “I wasn’t. I was just trying to set the alarm off to distract you.

“I swear to you… as soon as I got wind of what she [Sarah] was up to, I came round to stop her.

She then turns to Sarah and asks her to give Priya her stolen phone back, to which she initially refuses.

However, Priya soon issues her with a warning, snapping: “Do you know what, it’s fine… keep it. I’ll just call the police from the house phone.”

Despite Priya remaining defiant, Charity will do anything to protect her granddaughter – what lengths will she go to keep Sarah out of trouble?

Could Sarah and Charity be able to wiggle their way out of trouble after revealing what they have discovered about Priya and force her to lead them to Kirin?

Emmerdale airs Mondays, Wednesdays and Fridays at 7pm on ITV.

END_OF_DOCUMENT_TOKEN_TO_BE_REPLACED

END_OF_DOCUMENT_TOKEN_TO_BE_REPLACED
We and our partners use cookies on this site to improve our service, perform analytics, personalize advertising, measure advertising performance, and remember website preferences.Ok