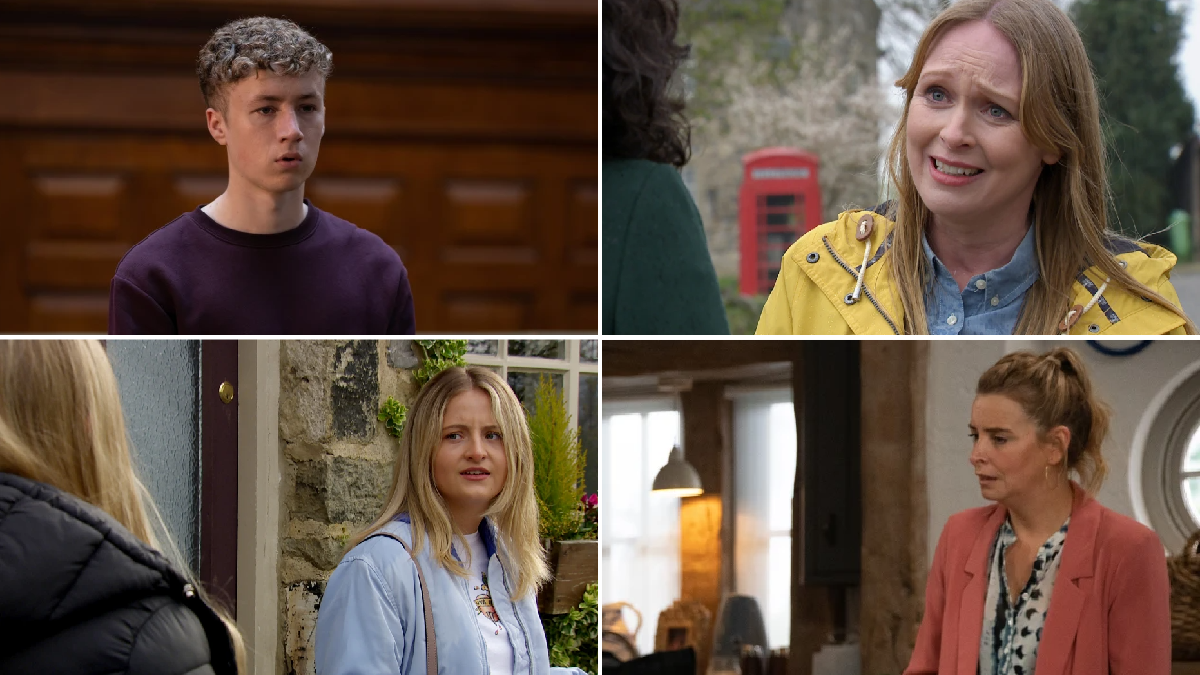 As ever, the DIngle family are in several sticky situations – would it be Emmerdale if they weren’t?

And meanwhile, Noah (Jack Downham) faces an uncertain future as he deliberates over whether to plead guilty or not guilty.

But whatever happens, he wants nothing to do with Charity (Emma Atkins).

Ness in a mess

Leyla can’t help letting slip to Vanessa that Suzy knew Holly. Vanessa’s shaken after learning that Suzy lied to her and begins questioning how serious their relationship is.

Knowing that she’s lied to Vanessa about Holly’s death, Suzy thinks Vanessa’s better off without her leaving Vanessa stunned. Feeling she’s at fault for coming on too strong, determined Vanessa pleads with her not to give up on them.

Leyla’s happy to hear that Vanessa managed to convince Suzy to stay. When Vanessa gets up to get a drink, Suzy informs Leyla that she’s going to start living a cleaner life leaving Leyla concerned about where she’s going to get her next drug fix.

Leyla suggests that Suzy and Priya come over for brunch and a team building exercise, but Suzy suspects Leyla’s tactics.

With Holly’s overdose still playing on her mind, alongside her relationship with Vanessa, Suzy informs Leyla that she’s staying off coke.

Leyla’s secretly alarmed when Suzy tells them that they should both quit while they’re ahead and tips the remains down the sink. Will Leyla see sense too?

Bolstered by Victoria’s encouraging words about their relationship, David’s determined to make things official by proposing to her. Pollard is not convinced.

Samson attempts to reassure Amelia who feels humiliated after a negative comment was posted on a picture that she put up on her social media.

Lydia informs Chas of her plans to buy herself the top of the range caravan that she wants, unaware that Sam’s already on the case.

As his solicitor informs him of his defence plea for tomorrow’s hearing, Noah simmers with resentment but holds his counsel. Charity’s incredulous when Noah tells her that he doesn’t want to plead guilty.

Pollard implores David to take his time and not rush into anything with Victoria but David informs him that he needs him to cover at the shop as he’s seen the perfect engagement ring at the jewellers in town.

Meanwhile at HOP, unaware of David’s plans, Victoria jokes with Amy about what David’s big talk could be about. When Victoria arrives to his romantic surprise in the woods, David’s bursting with excitement.

As he goes down on one knee and proposes, Victoria’s left speechless but how will she respond?

Later at court, as the legal advisor reads out Noah’s charges, he asks Noah what he pleads…

Moira arrives to take Faith to her appointment. At the hospital, Moira urges Faith to tell her kids about her diagnosis; fearing Cain will lose his temper knowing that she kept a secret from him.

Trying to be strong, Faith tells Moira to head back to the farm and she’ll let her know when she’s done.

Drawn and weary after her procedure, Faith worries as she struggles to get a hold of Moira. She further panics when she bumps into Wendy at the hospital… is her secret out?

Amy glowers at Noah as he passes her and the two exchange words. Back at home, rattled by his run in with Amy, Noah tells his mum that he wants to do a runner.

Charity doesn’t agree to go along with Noah’s plan and he frustratingly heads out leaving Charity concerned.

Sarah finds Noah sitting alone and she gets him to try and see sense by attending his court hearing.

Noah takes her words on board but he is still unsure whether he’s going to plead guilty or not and Charity’s anxious.

Amelia tries to distract Cathy knowing that the supplements that she’d bought are bad for her.

Keep a Lydia on it

When Vinny mentions an old motorhome at the scrapyard, Sam jumps on the opportunity to transform it into Lydia’s dream caravan.

Noah makes a decision while Faith continues to agonise.