Escape to the Country’s Ginny Buckley told off for property error ‘Do it properly!’

Escape to the Country’s Ginny Buckley was on hand to help Mark and Sue, a husband and wife from Bow, east London find their dream forever home in Somerset. While the first house they looked at got off to a good start, when the couple looked at the garden space on offer, they were left disappointed.

In a quiet cul-de-sac on the western edges of Yeovil, Mark and Sue arrived at a every promising property. “

“Looks like it has lots of character, done really nicely,” Mark added.

Ginny revealed: “The inside space that’s on offer is really going to appeal to the two of you considering you’ve come from a 2-bed flat in London!” 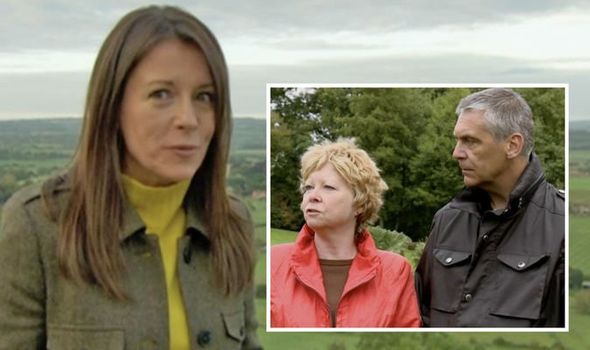 After stepping inside, the presenter continued: “This L-shaped detached home was built in 1975, using reconstituted stone and has character features. The front door leads into the hallway, from which all the rooms fan out.

“How does it compare for size to your current kitchen?”

“It is about six times as big!” Sue exclaimed.

“It’s made even bigger, of course, by this extension at the back, so let’s go and take a look at this space,” Ginny commented.

Inside the extension, she explained: “This was added on to ope up the kitchen space, the lovely high ceiling and it looks out all the way, the three sides in to the garden.” 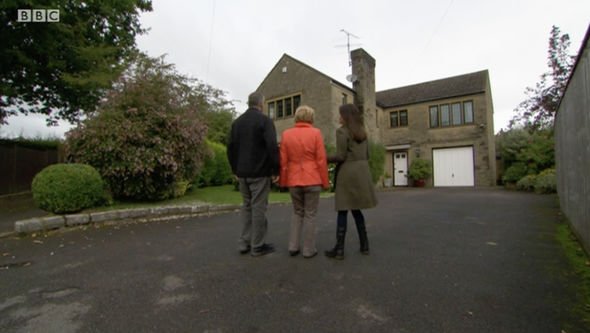 “Really lovely, I can imagine sitting in here and that’s what we want – something where we can do different things but be in the same room,” Sue said.

After looking around the other rooms downstairs, Ginny took the potential buyers to see what the upstairs had to offer.

But the master bedroom left them feeling flat.

Sue commented: “I don’t think this has got the personalisation that it’s got downstairs, it’s like walking into a hotel room; nice plain room.”

DON’T MISS…
Ranvir Singh was pulled to one side by Craig after Argentine Tango [COMMENT]
Escape to the Chateau’s Angel on one thing she refuses to fail on [INTERVIEW]
Emmerdale spoilers: Carly Hope to make ‘surprise comeback’ [EXCLUSIVE] 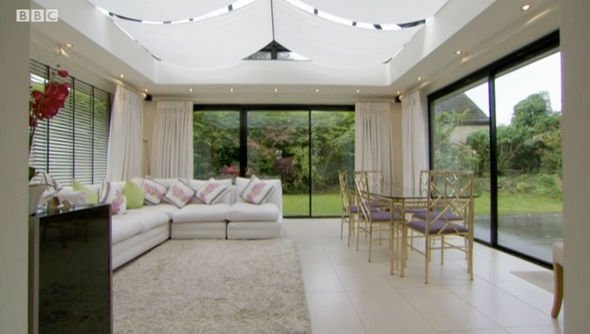 “Seems a bit small as well. Downstairs is so impressive and very big,” Mark added.

“Outside there’s an integral garage as well as gardens to the front, rear and side. There’s also a large deck seating area off the downstairs extension,” she narrated to those at home.

Ginny then turned to the couple and asked: “What do you think? Is this about the size garden you had in mind?” 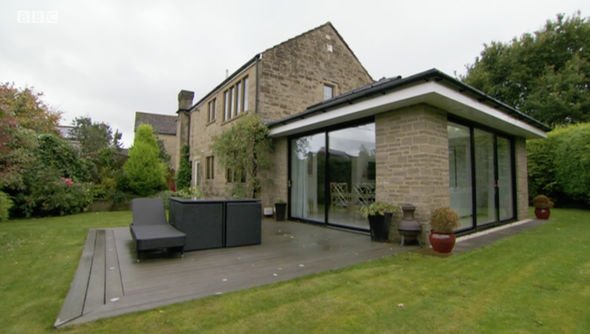 “I’d say a bit more than a tad!” Sue interjected. “Quite a lot, we’re looking for a reasonable amount more than this.”

“Obviously the extension has eating into quite a lot of the garden space,” Ginny argued.

“I don’t think it’s big enough for what we’re after,” Sue stated.

And Ginny explained: “I wasn’t sure, you were going from nothing, I thought maybe you didn’t want to go for too much!”

“If you’re going to go for it, go for it properly,” the lady pointed out.

Ginny then moved the conversation on the price tag and inquired: “How much do you think this property is worth?”

At the end of a second look around, the couple summarised: “Downstairs is really good, it’s perfect, really like that. pop that in another house, bigger garden that’s lovely.”

Escape to the Country airs weekdays at 3pm on BBC One.