Everything to Know About ‘The Chilling Adventures of Sabrina’ Season 3

I’ll be the first to admit that season two of Chilling Adventures of Sabrina left me with way more questions than answers. Is Sabrina still the Herald of Hell? How will the team rescue Nick Scratch from the netherworld? What’s with all the incest?!

Unfortunately, we’ll probably have to wait until part three is released on Netflix to get most of those answers, but here’s everything you could possibly want to know about the next season of CAOS while we wait.

Where did we leave off?

Sabrina and the gang foiled the Herald of Hell prophesy by locking the Dark Lord in Nicholas Scratch’s body and sending him to the seven circles. As a parting gift, Lilith restored Sabrina’s powers. That leaves Sabrina, Harvey, Rosalind, and Theo able to start planning a rescue mission.

Aside from the Fright Club, Prudence and Ambrose are on the hunt for Father Blackwood, the Church of Night is in disarray, and Aunt Zelda has appointed herself High Priestess and head of The Academy of Unseen Arts. 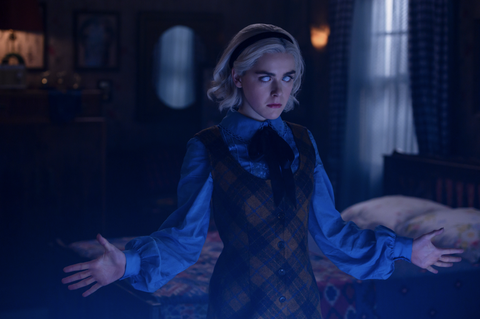 Is there a premiere date yet?

No, which frankly hurts my feelings. However, at least we know that part three officially finished filming as of September…

Is there any good news?!

We already know that part four is happening! In December 2018, the streaming giant announced 16 more episodes to be divided over seasons three and four.

Chilling Adventures of Sabrina has been renewed for 16 more episodes! Production begins next year and the next batch will air in two parts: Parts 3 & 4. pic.twitter.com/OvwMftgMN0

Are we going to visit hell?

YES. Finally, something I can really answer. Series creator Roberto Aguirre-Sacasa confirmed the Fright Club’s rescue mission will take us straight to hell.

Make sure to keep checking in for more info on your fave witch & friends.