'Friends': How Long Will It Take You To Watch The Entire Series Before It Leaves Netflix 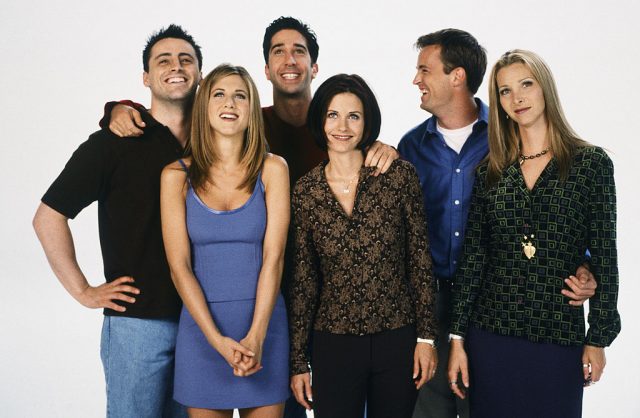 Friends has been off the air for well over a decade, but the NBC sitcom still holds a special place in the hearts of many fans. Unfortunately, Netflix recently revealed that it will no longer stream the beloved show after its contract with NBC expires. To help deal with the devastating news, many fans have taken to binge-watching the entire series before it leaves Netflix for good.

But just how long would it take to watch the entire run of Friends without taking a break? According to Binge Clock, it would take a person five days and one hour to complete the series in one sitting. While most of us would likely break this up due to time constraints, there is another way to revisit your favorite moments from the show. Here is a quick list of the eight of best Friends early episodes to watch before the show leaves Netflix.

The group faces a blackout across the city that traps Chandler (Matthew Perry) in an ATM enclosure with Victoria’s Secret model Jill Goodacre. The rest of the group, meanwhile, is stuck inside Monica (Courteney Cox) and Rachel’s (Jennifer Aniston) apartment, offering some hilarious moments between the girls and Joey (Matt LeBlanc), Ross (David Schwimmer), and Phoebe (Lisa Kudrow).

Joey is on Phoebe’s bad list after he starts dating her sister,Ursula, while Ross is worried about becoming a father. Rachel and Monica,however, seemingly meet the perfect dates after a trip to the E.R., where theyare introduced to two doctors played by Noah Wyle and George Clooney. The onlyissue is that Rachel does not have insurance to pay her medical bill andpretends to be Monica instead. The ruse ends up ruining their double date andoffers some of the show’s most hilarious scenes ever.

This installment of Friends featured some serious starpower from the 1990s, including cameos from Julia Roberts, Jean-Claude VanDamme, Brooke Shields, and Chris Isaak. While Shields’ role was memorable (andlanded her a sitcom of her own), the funniest parts were when Phoebe becamepopular for writing songs on death, and when the girls fought about going outwith Van Damme.

A list of the best Friends episodes would not be completewithout some Ross and Rachel action. This episode features a video clip fromMonica and Rachel’s high school prom in the 1980s, complete with big hair andinsane fashion choices. But the real kicker comes when Rachel finds out thatRoss was willing to go to prom with her if her date flaked out. Rachel’s dateeventually showed up, but Rachel was so moved by Ross’s decision that she kissedhim after re-watching the video.

Ross finds himself in a rush to get everyone dressed and out ofthe apartment for a museum benefit. The entire installment takes place in theapartment and there are plenty of great scenes that unfold, including a fightbetween Chandler and Joey over a comfy chair. There are also some great linesthat put this episode above the competition.

Monica and Phoebe find themselves at odds with each other over adollhouse the former inherited from her late aunt. After realizing that Monicawill not share her new toy, Phoebe creates her own dollhouse and subsequentlyattack’s Monica’s house with some dinosaurs. This episode also featuresChandler going out with Rachel’s boss, which turns out to be a terrible idea.

This episode begins with an innocent bet during a game and endswith the group switching apartments and finding out how Chandler pays hisbills. The game includes some hilarious revelations about the group, makingthis a must-watch episode if you want to learn more about each character.

Chandler and Monica kept their romance a secret for a long time,but everyone eventually found out the truth. In this episode, Phoebe discoversthat the two are dating and flirts with Chandler to get him to admit the truth.Chandler caves by the end of the episode, but only after Phoebe declares herlove for him.

END_OF_DOCUMENT_TOKEN_TO_BE_REPLACED

END_OF_DOCUMENT_TOKEN_TO_BE_REPLACED
We and our partners use cookies on this site to improve our service, perform analytics, personalize advertising, measure advertising performance, and remember website preferences.Ok